A ‘Life-Altering Situation’ Could Not Deter Ntuli from Graduating

A ‘Life-Altering Situation’ Could Not Deter Ntuli from Graduating 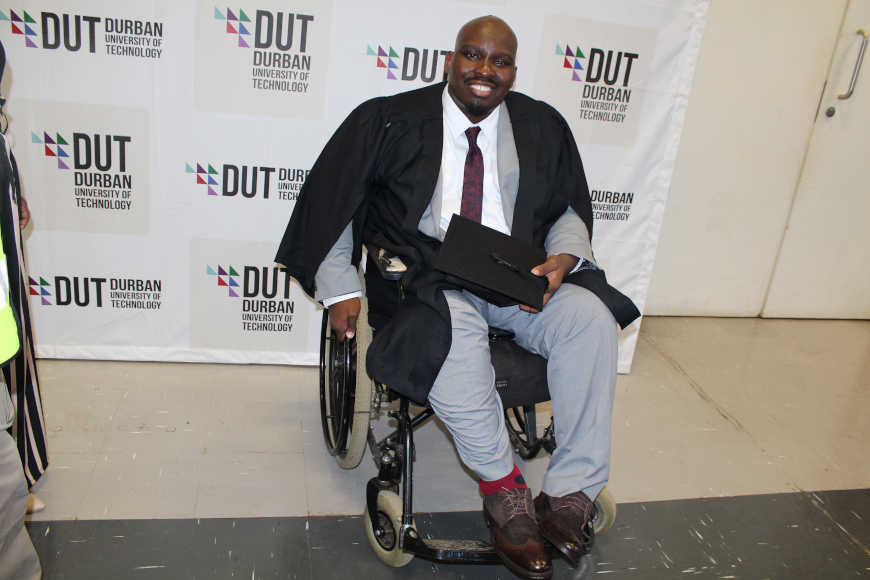 It is said that all great achievements are attained through mighty obstacles. This is the journey of one such brave lad Andile Ntuli, who despite going through a life-altering situation, still forged through to graduate with his National Diploma in Public Management at the FJ Sithole Hall, Indumiso Campus in Pietermaritzburg this morning.

The 26-year-old Ntuli from Imbali in Pietermaritzburg, could not contain his excitement upon graduating. “I am so happy beyond words I cannot really explain this feeling that I am going through. It was a rough ‘life’ journey but I am here,” he said jovially.

He enrolled to study in 2014 for a National Diploma in Public Management, but sadly his dream was cut short in 2016. The young man was involved in a severe car accident in December 2016, leaving him paralysed and disabled, unable to use the lower half of his body, and not understanding how life could change in a matter of seconds.

“I was involved in a car accident on the Greytown Road. I was so down, I felt like giving up on life, it was life-changing in a matter of seconds. I lost the use of my legs, so I have what is called a paraplegic disability. After the accident, I stayed in hospital for nearly three months, from December 2016, January 2017, until mid-February 2017,” he said.

For the whole of 2017, Ntuli could not go back to studying as he prepared for a life bound to a wheelchair, not knowing what the future holds. With the help of his family, he recovered from his injuries but had to learn to adapt to the usage of a wheelchair, and this new way of life. However, in 2018, he made up his mind to go back to his studies and his persistence paid off. “I could not get NSFAS funding which was a challenge, and finances became a struggle but my parents went out of their way and got me enrolled back at Riverside campus for my third year of study,” he said.

He also said he has to thank Andre Le Roux, Manager: Finance & Information Services, at the Riverside Campus for his amazing support. “I want to give a special vote of thanks to Mr Le Roux for his big support through my time here at DUT. I think that if it was not for his faith and belief in me that I would be able to facilitate the campus I would not have registered or perhaps wanted to find another institution as I only wanted to complete my studies here at DUT,” he said.

Being back on campus was wonderful but it had its struggles, as at the time he was attending classes, the new state of the art buildings and facilities at both the Riverside and Indumiso campuses had not yet been completed. “I have a brother of mine who was always with me and also my fellow class mates who carried me up to class venues that were located upstairs on campus. The lecturers were very supportive, especially in terms of all the work and would email me all the notes that would be tackled in class. All this really helped my journey and help me to finish my diploma,” he said happily.

Ntuli is currently doing his BTech degree in Public Management this year (2019), and is very excited to be able to make use of the new, revamped lecture venues. I am now able to get to class with no assistance or carrying from my friends because the new venues are wheelchair friendly, so attending classes is easier now,” he said.

He cannot wait to finish his BTech and possibly pursue a Masters degree.

He advises all students to cherish what they have and study hard. “It has been a difficult journey for me but if I can do it with all the obstacles and changes to my life that I had to make and adjust to, other students have no excuses and they can do it, so study hard,” he said.