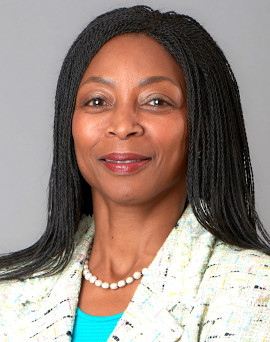 Who is Nonkululeko Nyembezi?

The Durban University of Technology (DUT) Chancellor, Ms Nonkululeko Nyembezi has navigated a terrain that is still overwhelmingly white and male-dominated with seemingly effortless ease, excelling in the process with a long string of firsts following in her trail. Known as South Africa’s ‘woman of steel’, because of her successful career in the engineering field – most notably as Chief Executive Officer of ArcelorMittal South Africa for six years and now as CEO of Ichor Coal N.V. – but no doubt also because of her proven resilience in the high-demand corporate environment, Nyembezi has grown to be one the most respected woman business leaders in the world.

Forbes Magazine ranked her as the 97th most powerful woman in the world in 2012, and she made it to number eight on the list of Most Powerful Black Women in the World. She is in the company of Michelle Obama, Oprah Winfrey and former Liberian President Ellen Johnson Sirleaf.

The combination of hard work, a punishing standard of excellence, and an astute recognition of how her engineering skills could propel her at a time when few women were excelling in the field, saw her leap from success to success at a time when there was a dire need to fill the skills gap in South Africa. Nyembezi, a mother of two, is acutely aware of the need to bridge the gender gap in the corporate world, but has personally not felt marginalised in the male-dominated environment, believing firmly that success is built on competence and capability.

Nyembezi’s stage was set from when she attended the historic and prestigious Inanda Seminary for Girls in Durban where she was, not surprisingly, a star pupil, especially in maths and science. From there, Nyembezi, raised in Claremont and one of three children of well-respected lawyer, the late Aubrey Nyembezi, secured an Anglo American Corporation Open Scholarship. Today, her impressive qualifications include a BSc Honours degree in electrical engineering from the University of Manchester Institute of Science & Technology, a Master’s degree in the same discipline from the California Institute of Technology, and an MBA from the Open University in the UK.

In 1984, Nyembezi entered the work environment as an engineer at IBM’s Research Triangle Park in North Carolina in the United States before moving to Dallas. She returned to South Africa as an accounts sales representative for the company’s local venture in 1986, and seven years later was appointed as IBM’s regional manager at its Windhoek branch. She held the position until 1998 when she switched direction to become CEO of financial services group, Alliance Capital, and then moved on to become the Chief Officer for Mergers and Acquisitions for the Vodacom group, driving its African expansion strategy and business developments in sub-Saharan Africa.  In 2008, she was appointed as a board member and CEO of Arcelor Mittal South Africa, the largest steel producer on the continent, where she proved her leadership mettle during trying trading times and public controversies. Now, Nyembezi, as CEO of Ichor Coal, oversees the company’s coal operations with customers in South Africa and abroad.

Nyembezi added another notch to her achievements when she became the first woman to be appointed chairman of the board of Alexander Forbes in its 81-year history from January 1, 2018. Nyembezi will remain chairman of JSE Limited, the company that operates the Johannesburg bourse, and CEO of Ichor Coal. She also remains committed to various non-profit boards and initiatives, among them the KwaZulu-Natal Philharmonic Orchestra, Johannesburg Philharmonic Orchestra, and Partners for Possibility, a programme that addresses the challenges faced by under-resourced public schools in South Africa.

Slightly-built as she may be, this daughter of KwaZulu-Natal has risen to take her place as a giant in her league and an inspiration to women and men worldwide.