ALUMNA NAIDOO AIMS TO BE A LINE PRODUCER AND WRITER

ALUMNA NAIDOO AIMS TO BE A LINE PRODUCER AND WRITER 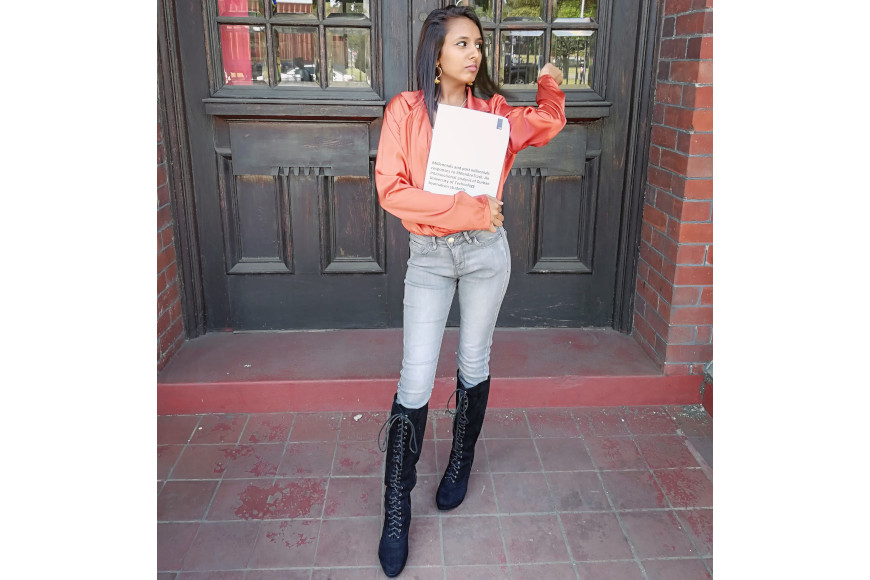 Speaking to Alumna Alicia Naidoo, 23, who is currently pursuing her Master’s degree in Journalism at the Durban University of Technology (DUT).

For her, her love for writing is what prompted her to study journalism. “Like most matriculants, I did not know what I wanted to do at first, I mean at 18 you don’t really know what you want but I knew I loved to write and that I could not picture myself being bound to an office space for the rest of my life. I wanted to travel, adventure and excitement and that’s how I knew journalism was for me. There’s that balance between the office space and actually going out. Working in television you often go out on shoots so there is that balance,” she said.

The charismatic lass is no stranger to hard work, having had the opportunity to work on the set and production of The Kandasamys: The Wedding as a production coordinator and in social media, PR and marketing, Sadhana: The Inward Path as a Junior Editor and then into Digital Media.  She also has work experience at African Lotus Productions where she is currently still working in the same position.

The dynamic go-getter is also a freelance writer, who thoroughly enjoys her career in writing, television and movie industry.
“A career highlight is definitely working on the Kandasamys: The Wedding. Being on set was a new adventure every day. I remember watching the movie at the cinema two years before having no idea I would get to work on the next one.

It was an experience of a lifetime and I was only 21 at the time. The Director and Producers had been so empowering and including that I got to work in pre-production, shoot, public relations and marketing. I have so much love and warmth for the film,” she said ecstatically.

Also, Naidoo got the opportunity to go to India in 2019, to film for Sadhana the Inward Path and it was her first time travelling internationally.
“I got to experience the food, culture and visit spiritual places like The Belur Math in West Bengal,” she said happily.

As a DUT student and working full-time, Naidoo talks on how she juggles her studies with working full-time.
“Working and studying, like anyone who does it, knows it is not easy. You can’t go home from a long day at work and immediately dive into academics, you tend to be tired and overwhelmed often. You also can’t prioritise one without neglecting the other,” she stressed.

Naidoo indicated that personally, she is a morning person so she wakes up early on the weekends and strictly dedicate that time to academics.
“One of my lecturers, Tarryn Frankish taught us this study technique – pomodoro which is basically 25-minute distraction free time and a five-minute break. I try to get in like 4 to 6 of these at a time to be productive,” she said.

Speaking further on her Master’s studies and her thesis, Naidoo said it evolves around the perception of dark skin beauty on social media, for now. “The thesis will look into colourism and how the hashtag activism of #MelaninMagic has influenced social change through social media where females are embracing their melanin complexions rather than filtering themselves to be lighter skinned in order to fit into society’s standard of beauty. That in itself is a revolution. My research fits in the Indian community where colourism is a huge factor. I’m really passionate about writing this because I often feel like we’re all judged solely on face value,” she said.

For Naidoo, being able to adapt to change and evolve has become essential, especially in the field of journalism. “Learning does not end with your degree, like most people think. Read, take free online courses, watch YouTube videos. You cannot think I like to write, so I’ll just write, you have to be able to shoot and edit to make multi-media packages you have to know digital marketing and social media strategy to promote this as well. You have to know sound. You need to be as diverse as you can because Journalism requires so much more now, than it used to,” she said.

Naidoo spoke fondly of DUT, adding that what makes DUT different from traditional universities is the practical aspect students get from work integrated learning.
“My internship equipped me with the skills I could have never received from just theory. I was mentored by Director of Kandasamys: The Wedding, Jayan Moodley and Associate Producer of Kandasamys: The wedding, Indhrannie Pillay, who are both such strong opinionated women who are so bold in a male dominated industry, that in itself is all the inspiration I needed to know. I want to one day be as assertive and talented as these two ladies,” she said.

For Naidoo, her future goals, going forward, include working more in films.
“I would definitely love to work more in film and hopefully one-day work myself up to being a line producer and a writer,” she said.