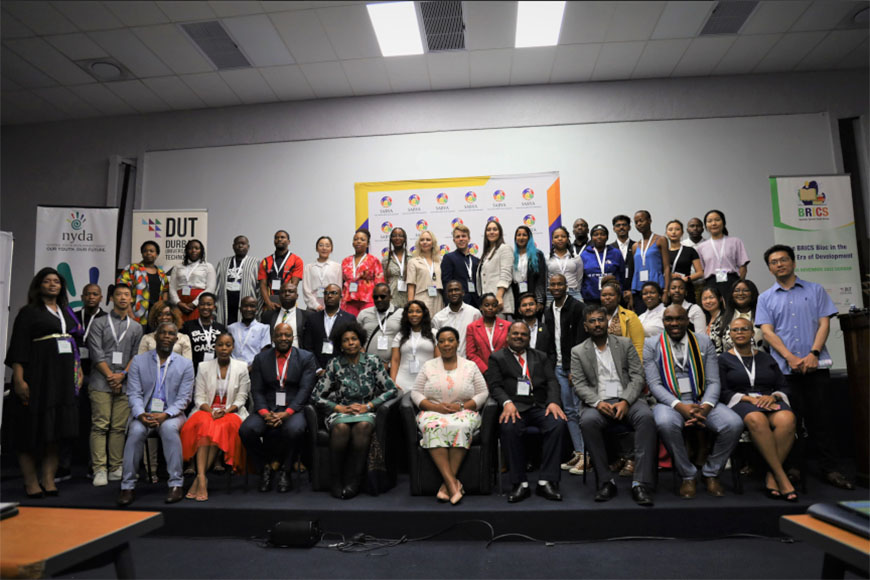 The Faculty of Management Sciences and the Durban University of Technology hosted the Brazil, Russia, India, China and South Africa (BRICS) Summer School in Durban this week. The Summer School South Africa 2022 commenced in the Mansfield Hall on the Ritson Campus at DUT on Monday morning.

This is one of the deliverables of the BRICS Institute grant from the National Institute for the Humanities and Social Sciences (NIHSS) received by Prof Fulufhelo Netswera supported by Dr Ndivhuho Tshikovhi. The Summer School brings together young leaders from BRICS and the Global countries to conduct a series of workshops and lectures that focuses on economic, political, cultural and development in BRICS.

Some of the objectives of this Summer school were to provide BRICS youth with an understanding of BRICS and its role in a changing global landscape; strengthen youth cooperation between BRICS youth on various issues affecting youth and identify common interests for further collaborations; and, to develop a cohort of young BRICS policy makers and influencers who are key players in the new era of development. 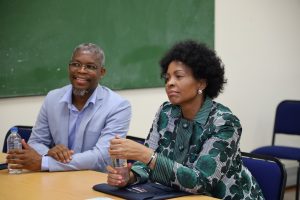 Minister for Women, Youth and Persons with Disabilities, Ms Nkoana-Mashabane with Prof Fulufhelo Netswera, Executive Dean: Faculty of Management Sciences, at the event.

“I welcome you all to DUT on this auspicious occasion-the first South African BRICS Summer School. We all agree that stemming out of global multilateral discord, the world has over the years slowly but surely been evolving; the establishment of the Bretton Woods institutions and specifically the United Nations, International Monetary Fund (IMF) and World Bank had historically been hailed as humanity’s greatest progress in international cooperation. The world has however not been safer ever since. Instead, wars are escalating, hunger, diseases and poverty continue to ravage smaller nations, especially those in the Global South,” he said.

“The establishment of the BRICS grouping came as a breather of fresh air especially for us in the BRICS nations. It is common knowledge now that both the West and the countries in the Global South now take the BRICS formation serious and new lined up memberships are but a testament,” he explained.

Dr Mohale further spoke of how in 2013, DUT was instrumental in the hosting of the South African BRICS Presidency in Durban. 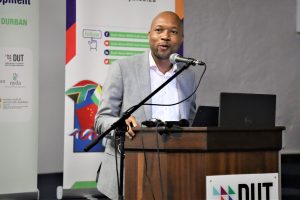 Dr David Mohale, Director of Special Projects in the Office of the Vice-Chancellor and Principal at the Durban University of Technology.

“We are even happier that the first South African BRICS Summer School has found its way to our premises. I would like to thank Prof Fulufhelo Netswera and the Faculty of Management Sciences specifically for connecting DUT to everything BRICS,” he said.

An exciting element to the Day One programme was the dynamic addresses given by the Honourable Nomusa Dube-Ncube, Premier of KwaZulu-Natal and Honourable Minister Nkoana-Mashabane, Women, Youth and Persons with Disabilities.

Premier Dube-Ncube expressed her singular honour to address the gathering of the BRICS Summer School South Africa, a platform for young people of the country to define their place within the BRICS system and within the world.

“You are holding a Summer School in one of the best summer cities on the face of the earth, and in the most beautiful province of KwaZulu-Natal at the Durban University of Technology (DUT), one of our premier academic institutions. We thank the National Youth Development Agency (NYDA) which, in collaboration with the South African BRICS Youth Association (SABYA) and DUT are hosting this BRICS Summer School. 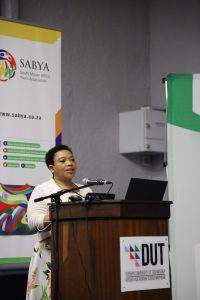 Premier Dube-Ncube added that she was pleased that this BRICS Summer School has lined up a number of experts in various subjects, all which are of great relevance to the growth and development of continents and countries.

“The objectives of the Summer School are to develop a cohort of BRICS youth who will play a critical role as advocates and aspirant policy makers who will be key players in the developmental affairs within BRICS countries, in the interest of BRICS countries and people,” she said.

Furthermore, she stated that this Summer School comes as South Africa is again to assume the Chairship of BRICS in 2023, which coincides with the holding of the 15th BRICS Summit.

Premier Dube-Ncube further highlighted on the role of youth in BRICS saying that within the BRICS countries, youth are a significant group.

To date, she added that the BRICS countries have launched a number of initiatives aimed at reaching out to and integrating young people into society, such as the launch of the first Mobile Digital Analytics Skills Lab at Orient Heights in Pietermaritzburg, KwaZulu-Natal.

“Our Provincial Executive Council approved the Digital Transformation Strategy alongside the Nerve Centre Optimization Strategy as part of the drive towards digitization and the building of a Smart Province that is alive to the demands of the Fourth Industrial Revolution. We want the youth leaving school to be better prepared to contribute towards a prosperous and equitable South Africa,” she said.

Premier Dube-Ncube also made mention that in KwaZulu-Natal, young people are already undergoing training in Digital Skills, Drone Technology, in smart technology and in intelligent transport systems to fight crime, monitor and recover accidents and save lives.

“This training is being launched in the whole province, district by district in order to reach scale very quickly towards having smart people, using smart technology in a Smart KwaZulu-Natal. The initiative has secured partnership with the South African Space Agency and NASA to help create smart solutions through the use of smart technology to find missing bodies that were washed away by the floods,” she added.

In conclusion she wished everyone a successful BRICS Summer School and that this interaction leads to the achievement of a better Africa, a better South Africa and a better KwaZulu-Natal.

Adding to the conversation was the dynamic Minister Nkoana-Mashabane who also welcomed all the delegates to the (BRICS) Summer School South Africa 2022 and advised youth to use the platform to connect globally, share ideas, debate, and harness resources to create the future they want.

Speaking on behalf of the board of the South Africa BRICS Youth Association (SABYA) was Luanda Mpungose, the Board Chairperson.

“As the board of SABYA, we are fiercely committed in our role as an oversight body, to provide strategic guidance and lend our support towards the exponential growth of this important organisation. I wish you the best of luck and may you have fruitful deliberations,” she said.

Day Two highlights were on discussions pertaining to the BRICS Policy Lab introduction, the role of NDB in the new era of development as well as the reforming of multilateral institutions.

On Wednesday, 23 November 2022 looked at climate action in BRICS.

On Thursday, 23 November 2022, another exciting highlight was the panel discussion on opportunities for youth in BRICS. One of the panellists was Lin Wu: Director of the Confucius Institute at DUT.

He said: “it is the time to raise our youth’s awareness now to seize the vast number opportunities and possibilities that is created by BRICS platform, to embrace the new era that belongs to them.”

The final day concluded with some sight-seeing in and around KwaZulu-Natal with the BRICS youths.