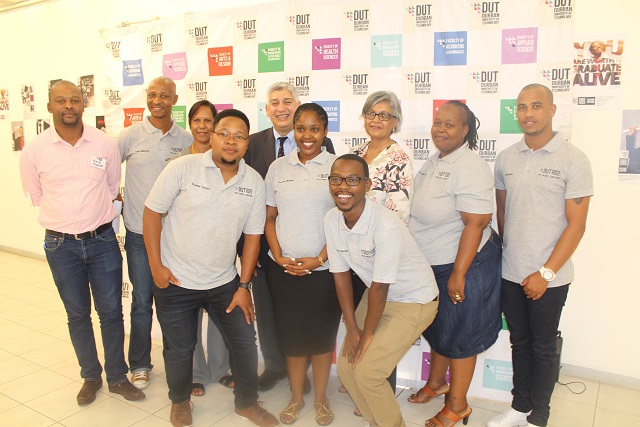 In celebrating its successes and growth, the Durban University of Technology’s HIV/AIDS Centre has called for unity in the fight against HIV/AIDS and gender diversity issues.

The DUT HIV/AIDS Centre, which falls under the Student Counselling and Health unit, recently held an interactive session with stakeholders within and outside the University.

In his keynote address, Professor Ahmed Bawa, DUT Vice-Chancellor and Principal, said the fight against societal issues such as HIV/AIDS and gender discrimination was something that needed unity. “HIV/AIDS affects all of us and a strong bond is needed to address anything that discriminates individuals regardless of their status or sex preference,” said Prof Bawa.

The dialogue formed part of the many conversations that the Centre has hosted in previous years. One of its core campaigns: Graduate Alive Campaign, has been a success and become famous in motivating students to learn more about the HI virus and other relating issues and myths surrounding it. The Graduate Alive Campaign was first launched in August 2010. In 2015, the Centre also hosted a successful campaign against rape: Silent Protest which was aimed at addressing gender diversity issues and as well as rape.

The University’s Lesbian, Gay, Bisexual, Transgender and Intersex (LGBTI) Programme Co-ordinator, Nompilo Mjwara, said although there has been great improvement within the University in the struggle against the understanding of gender diversity and freedom of choice, there was still plenty of room for improvement. “We have had students who applaud us for the work we have done in informing and assisting our students in the understanding of LGBTIs and HIV/AIDS. However, there are students who still live in fear. For us to make sure that each and every student is free from discrimination or fear of any sort because of their sexual preference, we must unite in educating everyone about gender diversity,” she said.

Thobile Zulu, DUT HIV/AIDS Centre Manager said her team is constantly working towards creating a supportive and caring environment for people who are infected and or affected by HIV/AIDS and for those who fall under the LGBTI group. “The journey is not easy but my team and I are dedicated and DUT is transforming through the knowledge and skills as well as public engagements that we have offered,” said Zulu.

The DUT HIV/AIDS Centre can be contacted on: