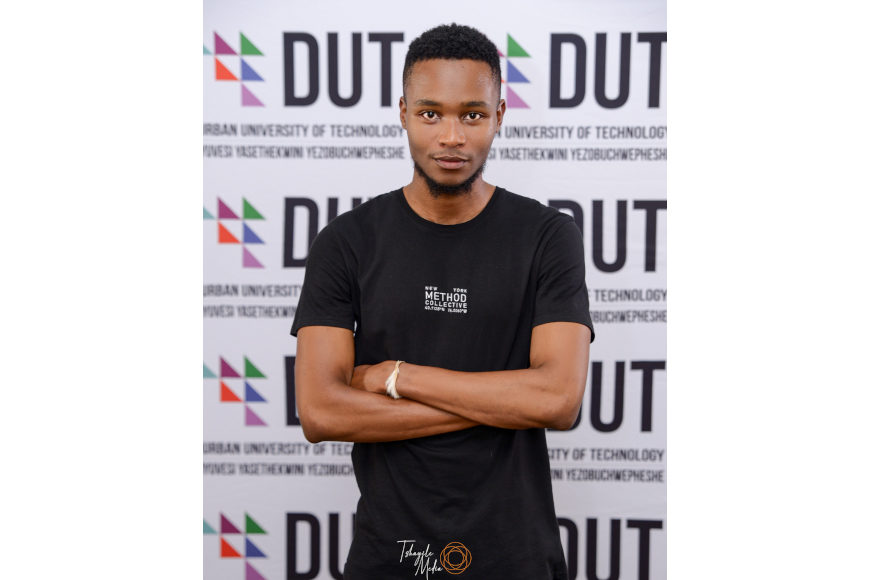 The Durban University of Technology’s (DUT’s) Nkululeko Mbatha, is flying the DUT flag high after being selected as one of the four finalists for the virtual Suprastar Search Competition 2022.

The virtual Suprastar Search Competition 2022 aims to give two entrants the chance to make it to the Supra stage to represent their country at the upcoming Mister and Miss Supranational competition, taking place in Poland in July 2022.

Upon hearing the news of his selection, Mbatha was over the moon.   “I feel really honoured to have made it to the final four. When the competition started, I could only dream about making it to the finals. I can only be proud and grateful. DUT has contributed to the person that I have become, and I will forever cherish that,” he conveyed.

He further expressed that it would be the greatest honour to represent South Africa at the Mister Supranational 2022 in July, alongside Miss South Africa 2021 and Miss Supranational SA 2022, Lalela Mswane whom he truly admires not only because she is also from KwaZulu-Natal (KZN) but because she has shown to be a courageous young lady over the past few months.

“Standing beside her on such an international arena that could potentially make our nation proud and recognised if it comes out right, is an experience I am longing to go through,” he said jubilantly.

The 27-year-old Mbatha, who is originally from Ulundi, KwaZulu-Natal (KZN), is a BTech Public Relations and Communications Management graduate at DUT. He forms an integral part of the DUT Communications team under the Division of Corporate Affairs, whilst also working on his Master’s degree in Management Sciences: Business Administration.

“I am also a professional model signed with Boss Models Durban, a content creator, and a brand influencer. In 2016, I was named Mr DUT 2016 and I went on to represent DUT at Mr SA campus 2017, being the first ever Mr DUT to make it to the top three placing as the first runner-up in the competition,” he added proudly.

“Unfortunately, Mister Supra South Africa did not happen. A close friend of mine shared an Instagram announcement where the SupraStar Search page was announcing that South Africa (males only) has been added on the list of countries that are eligible to contest in the second season. I did not even think twice, I submitted my application right away,” added Mbatha.

Explaining more on the competition, Mbatha expressed that the contest is virtual, and it is dependent on public voting and judges from different regions of the world.

“We have been taking part in a series of activities and there would be eliminations after each activity. One really had to do their best for each of these intensifying activities to secure a spot,” he stressed.

Mbatha said his overall experience with the contestants from all over the world has been superb.

“We are an awesome group of dedicated individuals from different countries with different time zones and so much to offer, but we have made it seem easy to communicate, you would swear we are a few houses away from each other,” he chuckled.

Mbatha also said that they (the contestants) also encourage one another on the groups they are normally added on after every elimination.

“I have engaged with some of the contestants on private chats and it has been absolute fun and educational,” he remarked.

For Mbatha, finding a balance between his job, modelling and family life is demanding but it something he has learnt to manoeuvre around.

“My job is important to me, not only because it has afforded me to pay my bills, but it is what I have always wanted and more. I strive to advance and be bigger in my career. Modelling has shifted to be a part-time gig that I only tap into when I have time. My job, studies and family remain my highest priorities,” he relayed.

The main goal for Mbatha is that he had always wanted to take part in a competition that will potentially send him to represent his country and he is happy that he is really close to it, and it all feels just right. If he wins the competition, this will mean he has done a great job for a young man who did not even think he was even fitting of being a model.

“In all honesty I can only be proud, to go to the world, collect as much information and knowledge as I can and come back to share with the others,” he said.

Mbatha also thanked everyone from his friends, cyber friends, family, and colleagues, for they have been supportive from the time he had submitted his entry, to making the first cut to the final four.

“They have shown me that ubuntu still exists and social media is not entirely a jungle. I wish all of them nothing but blessings and prosperity,” he said.

To vote for Nkululeko Mbatha, go to https://suprastar.choicely.com/vote22/ , the final voting poll is open till Thursday night, 17 March 2022.

The ultimate winner will be announced in a few days after the voting has closed.