Communicating at the Speed of Light

Communicating at the Speed of Light 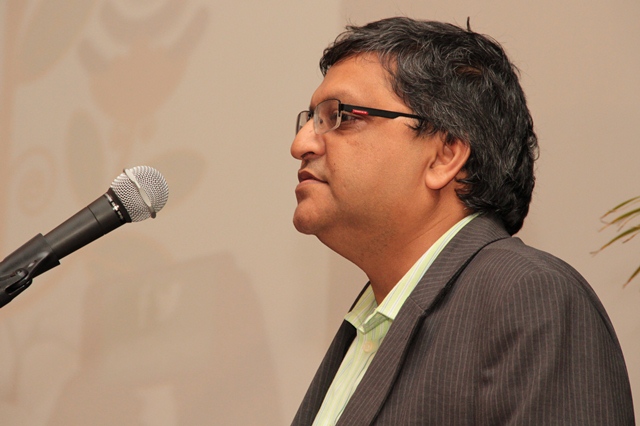 If you’ve traveled between Durban and Johannesburg by car you may have noticed the digging of trenches and the laying of pipes to carry bundles of fibre optic cabling that carry data at phenomenally fast rates in the form of strings of 0s and 1s.

The rest of South Africa too is being wired up like this to bring large data transmission capacity at phenomenal speeds to everybody.

We could have guessed that households in our metropolitan areas are more likely to be connected than those in rural areas and this is indeed correct, the ratio being 16.4% to 2.0%. Smartphones are likely to be the revolutionary edge and already we are seeing 17.9% of rural homes with the capacity to go online using mobile technology.

Why am I prattling off these numbers? I do like numbers (having grown up with them and loving them and the patterns they form), but the purpose of this is to build an argument that in South Africa, we are on the cusp of some rather exciting possibilities, depending on whether or not as a society we set out on a path that is information-rich, dependent on access to information and knowledge and driven by connectedness.

Communication at the speed of light

Communication has been an activity of the species homo sapiens from the very beginning of its emergence through the process of human evolution. Through the ages, the methods and modalities of communication have evolved; always pulling on the latest technologies and sometimes pushing on the technologies helping to generate new ones.

In the movie The Postman with Kevin Costner and Olivia Williams, one is introduced to the notion of the importance of the postal services as a fundamental requirement for the creation of a nation – a way for a society (or groups of societies) to be sewn together into a bigger entity. The postmen in the movie, led by Kevin Costner, understand this and so to them, it becomes a matter of grave national significance that they deliver the post at all costs and keep the communication streams open.

In recent times, with the advent of the internet and the World Wide Web, we have added to the traditional modes of communication, a vast array of electronic communication systems such as email, the various social media platforms and instant messaging. This has produced four or five rather powerful developments.

First, communication is now instant across the world. This weekend, I forgot the password of a service I receive in the USA. I requested a new password online, answered some questions online and received a note to say that I would receive the temporary password via email. Within a minute I logged into my email account. The new password had arrived.

The world and its people increasingly function as a connected, globalised entity. Last year’s Global Climate Convergence in New York City was globalised through social media, email and other forms of communication. Hundreds of thousands pitched up in New York but millions connected to the events from all over the world. Anybody who was interested was sucked into this event from wherever they were with regular multidirectional updates, feeds, uploads and community building. One of Durban’s leading environmental activists, Desmond D’Sa, addressed several meetings including a mass rally on Lexington Avenue.

Second, these new communication technologies are increasingly ubiquitous. DUT’s primary communication channel with its students is electronic, and this creates the platform for services to be delivered via electronic media. Set up in partnership with the Department of Communication, the e-Skills Hub at DUT led by Colin Thakur, works precisely on this; understanding how best to improve the capacity of communities to access services via the web. Perhaps the flip side of this coin is whether local government structures and municipalities have the wherewithal to deliver such services electronically. So Colin and his merry band of e-activists work on this too.

Third, we have developed platforms that are common across the world. Forever more, we will all be local and global citizens. We will be communicating with people instantaneously across the five continents. We will be building new circles of friends and comrades many of the circles transient, depending on the issue. I’ve met a first year student at our Faculty of Arts and Design at DUT who was already communicating with students in other parts of the world about her designs and the theory behind them. And as my fellow academics will attest to, global collaboration becomes easy to achieve.

Fourth, it is rather easy to engage in this form of communication once you are setup and ready to go. I’ve had three or four occasions when I discovered that my credit card security had been breached through regular email updates from my bank. And my request for payments to be stopped communicated via email; all within minutes.

And fifth, while there are costs associated with developing access to the internet, it is rather cheap to communicate. Nobody ever asks, “how much will it cost to send this email”?.

We are addicted to immediate communication. Often it feels like we are expecting the response to emails even before it has reached its destination. It is no longer uncommon for people to be connected on a minute-by-minute basis across the world – either for professional or social ends. Imagine physicists collaborating with each other, having individuals here in Durban remotely control pieces of equipment in an experiment that is going on at CERN in Geneva or in Fuzhou in China where DUT has a large collaboration. The new technology has really revolutionised communication and it has carried us with it.

The key question is how we can make this work for us so that the quality of the life of South Africans is improved and the impact on our children and vulnerable ones is positive. Like all technologies, they may be used well or they may be abused. Our challenge is to build a broad social consensus on what works for us and what doesn’t and how to behave with this very powerful technology at our disposal.

Pictured: Colin Thakur is the Director of the iNeSi e-Skills CoLab at the Durban University of Technology. He is a digital activist keen on upgrading the e-skills of the nation to enhance the quality of life. He lives and subscribes to the mantra One-person-One-connected device..
–