Darts Champ Off To Romania For 2019 World Darts Cup

Darts Champ Off To Romania For 2019 World Darts Cup 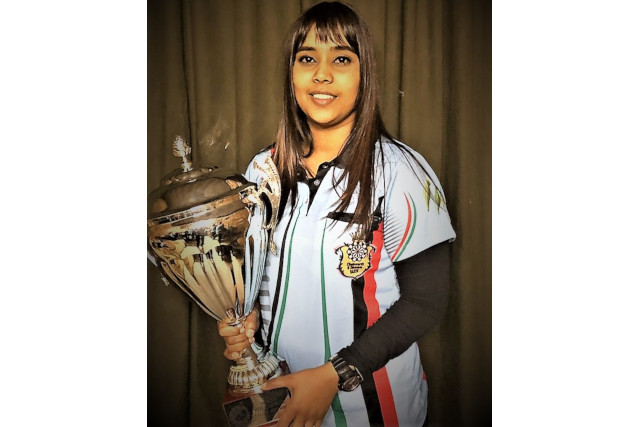 The petite looking Durban University of Technology (DUT) student Kriya Odayar loves investigating all about marine organisms in the laboratory and out of her academic environment, loves the game of throwing missiles (darts) onto a dart board.

The current PhD student at the DUT’s Institute for Water and Wastewater Technology, has a good throwing stance and grip on the art of dart throwing, to the extent she has now been chosen to showcase her ‘dart’ skills and represent South Africa at the World Darts Cup that will be held in Bucharest, Romania in September next year.

She is currently completing her PhD at the Institute of Water and Wastewater Technology under the supervision of Professor Faizal Bux and Dr Abhishek Guldhe. Her PhD study is based on the application of marine microalgae in feed for aquaculture.

Professor Faizal Bux, Director: Institute for Water and Wastewater Technology, also congratulated Odayar, adding that he and the department are very proud of her achievement in the Dart sports.

Being the eldest child in her family, she had a very simple and happy childhood with her two younger brothers. Formerly from Merebank, her family moved to Chatsworth in 1995. “I attended Markland’s High School and thereafter completed my Diploma in Biotechnology at DUT. From 2007 to 2009 I worked as the laboratory technician at the Crafcor Cato Ridge Abattoir. I got promoted to laboratory Manager in 2009 and thereafter moved on to work for Frey’s Food Brands. I returned to DUT in 2013 to complete my Bachelor’s degree and Master’s in Biotechnology and I am now completing my PhD. As a person I don’t like planning too far ahead and believe that living life as it comes is the best,” she said.

Her love for darts may seem unusual to her friends but to Odayar it comes naturally as she comes from a family that loves the sport.

“I come from a family of dart players from my parents to my two younger brothers Nolan Odayar and Prani Odayar-who is a South African youth champion. One of my role models is my uncle, Rajan Odayar, who is also a KwaZulu-Natal number one ranked player. So, I naturally took to the sport practicing with my younger brothers from a very young age, although I had never played competitively until 2013,” she said.

Odayar was one of four women to be selected to represent South Africa at the World Cup of Darts in 2019.

“Four women have been selected to represent the country at the World Cup at which I was placed first based on points won during the South African Nationals,” she said excitedly.

She also added that prior to the South African Nationals, there is a provincial selection whereby six ladies are chosen to represent the province. “I was placed first in KwaZulu-Natal. My mum and I play Doubles partners at the South African Nationals and we are the 2015 Ladies Doubles champions. I’ll also be the first Indian woman to represent the country and at the World Cup,” she said excitedly.

She also added that one of the biggest tournaments after the South African National Darts Championship is the Last Man Standing competition. “It’s the first national tournament of its kind where participants compete for incredible prize money and to possibly join Devon Peterson at the PDC World Cup. This year KwaZulu-Natal held two and I won both being the first woman warrior in the competition,” she beamed.

For Odayar, she said juggling her studying with her love for darts is important and beneficial as it gives her a break from her academics.

“Darts being an indoor sport is actually beneficial to me as it allows me to have a break from writing and practice. Athletes learn to manage time and excelling in every part of life is a must, that being my PhD and Darts,” she said.

She has stressed that playing darts requires a lot of practice as it’s a sport based on muscle memory. She makes time to practice five to six days a week, playing between two and three hours every evening. “Showing respect to your opponent is the most important, something which is earned and not given. You have to disciplined to training and practice sessions which always shows in the game of darts. The more you practice the better you become as a player,” she said.

Besides her discipline in her game of darts, she believes if one focuses on anything in life, dreams can come true. “Determination, dedication, hard work and practice, practice, practice is key. In any sport, practice 99% of the time overtakes talent,” she stressed.

Her future plans are to encourage more youths to get involved in the sport, at community level.

“My fiancé and I are now more focused on getting more youth involved in the sport as darts will eventually become an Olympic sport. At the moment, we are building a youth development centre where we will start teaching and bringing the youth in to train as of the end of August 2018,” she said proudly.

Odayar is excited to be given such an opportunity to represent South Africa but has said the financial implications is a concern. She stressed that selected individuals are also required to contribute towards the expenses which includes the uniform, accommodation and travel.

She is also hoping to obtain sponsors who may want to help with sponsorship for the trip. If anyone is keen to help in any form can contact Kriya Odayar on 0823415629 or email: kriya.odayar@gmail.com.