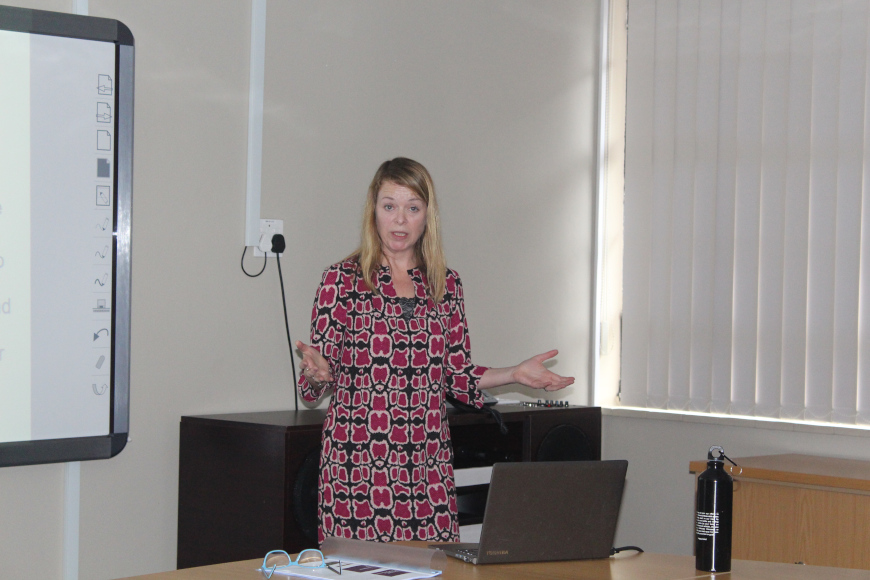 The Faculty of Health Sciences (Professor Nokuthula Sibiya) in partnership with the International Education and Partnerships (IEP) hosted a lecture by United Kingdom’s (UK’s) Dr Ruth Cross, at Ritson Campus, on 4 November 2019.

Dr Cross’s talk was titled: What Does Health Promotion Have To Offer: Perspectives From The United Kingdom (UK).

Her presentation explored what health promotion is about and how it sits within the broader field of public health. She spoke about the state of women’ s health in Leeds in 2019 where women are more likely than men to become addicted to smoking, alcohol and drugs.

“Fewer women are smoking but levels are higher than the national average, Leeds school age girls are more likely to smoke than similar aged boys, women from the wealthier parts of the city also tend to drink more, with gambling increasing in women. Women also have a tendency to be less physically active than men, particularly in more deprived areas,” she said.

She added that while individual patients can take action on issues such as diet, alcohol intake, exercise and smoking, they can only do so in the context of the socio-economic factors that affect their decisions. Dr Cross also said that in the last decade the concept of an obesogenic environment had gained currency.

“Our health and well-being is influenced by many things. Determinants act within and across the life course.

Many determinants are outside our direct control or are influenced indirectly by the wider determinants that construct our beliefs and behaviour,” she said.

Dr Cross also spoke more on what the key issues for public health are in a local and global context and how they might be addressed by considering what works to promote health.

She further delved that there is a dire need to change the environment, rather than changing people’s minds, and by making small changes in one’s environments can nudge one to behave differently and make different choices.

Dr Ruth Cross is the Course Director for Health Promotion in the School of Health and Community Studies at Leeds Beckett University, Leeds, UK. She is a nurse by profession and has over 15 years’ experience working as an academic in the field of health promotion and public health.

Dr Cross has published a range of material on health promotion including books, book chapters and journal papers. She is also editor of the International Journal of Health Promotion and Education.