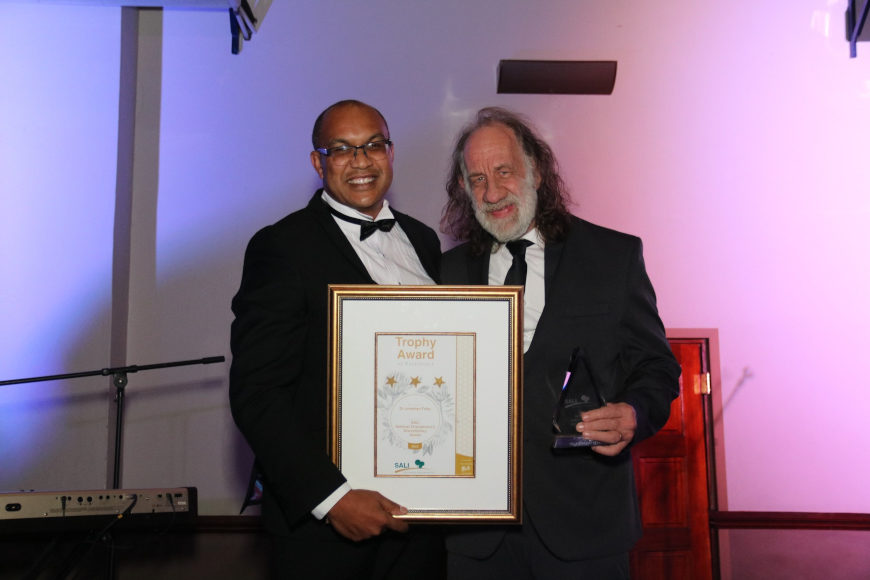 SALI was formed in 1984 by a group of landscapers who understood that the true potential of the landscaping industry could only be realized if landscapers showed unanimity, created excellent work and worked with professionalism and integrity. SALI sets and monitors landscape standards and is a national representative for landscaping professionals in South Africa.

The award given to Dr Foley is to recognise and reward those individuals who have excelled themselves and/or have made significant contributions to the landscaping industry.

Speaking on his exciting win, Dr Foley said: “I am eternally grateful to Almighty God who makes all things possible. It’s great to be part of a vibrant industry that shapes the built environment into a better place through the recreation of nature and the design and development of landscaped gardens. Education and training plays a vital role in empowering young people to run with this vision. I am privileged and humbled to be recognised by my colleagues and peers for this award.”

Dr Foley explained that this was an award from SALI in recognition of his education and training inputs into the landscaping industry both locally and nationally.

“The awards are nominated, considered and evaluated at a provincial then a national level by the respective executive committees of SALI. The final decision must be unanimously supported by all EXCO (provinces and national) and is awarded by the National Chairman.”

“SALI and SANA (South African Nursery Association) merged this year to have a joint convention under the auspices of the Green Industry Council (GIC),” he said.

He further added that this is a once off lifetime discretionary award. In 2014 he received a DUT award for teaching excellence by the executive Dean FAS and in the same year a Certificate of Excellence for academic performance from the UKZN School of Humanities where he was doing his doctoral studies.

Dr Foley’s love for gardening became a reality when he first studied Horticulture at Technikon Natal (Now DUT) in 1979. During his experiential student learning he was exposed to a wide range of tropical plants and indigenous flora. On qualifying he worked for the Natal Provincial Administration as a senior horticulturist managing a nursery and developing and maintaining various provincial landscapes.

“My love of art and design motivated me to study Graphic design, also at Technikon Natal and on completion I began an independent landscape design and contracting in the Durban area. A job offer at my former college (TN) led me into a 27 year teaching career where I could share my knowledge and passion for plants with young people and assist their entry into the green industry,” he said.

During this time, he developed bridging and foundation courses for first year potential entrants into horticulture. He also developed and managed the training component for the “Greening the nation programme” which empowered selected community leaders and BBEE landscape contractors in terms of nursery and landscape practice.

Dr Foley also established a School of Horticulture at DUT, a six-months hands on mentoring programme for all third year students. He holds a Master’s degree in conservation from DUT and a Doctoral degree in biodiversity from the University of KwaZulu-Natal. As an EXCO member of SALI KZN he serves as a provincial judge for the annual awards of landscaping excellence as well as handling the education and training portfolio.”

For Dr Foley, his win intertwines with DUT’s ENVSION2030 in that he has always subscribed to these values and is happy these important principles are now articulated and embedded in DUT policy going forward.

“All awards of recognition are gratifying on a personal level as it means key players in the industry honour your work done over the years,” he said.