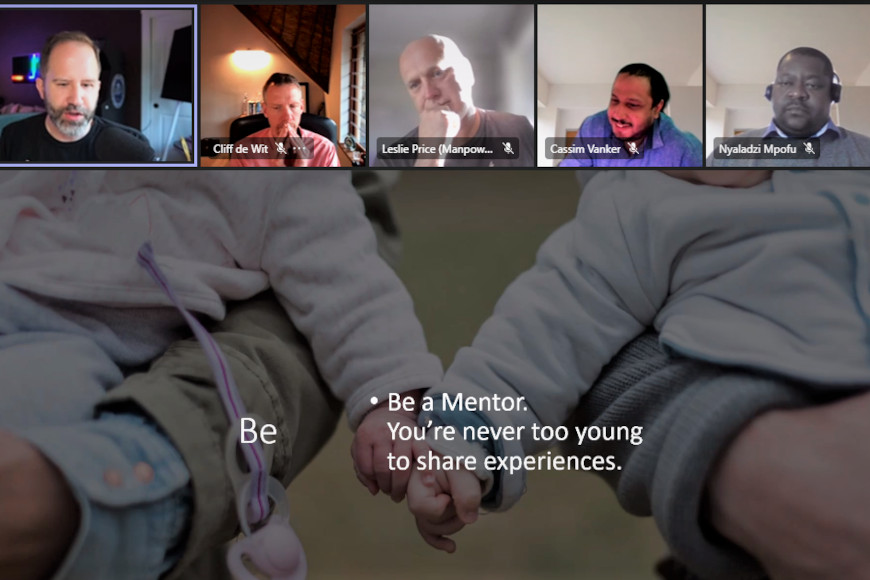 The Durban University of Technology (DUT) AppFactory, the Knowledge Information Management Cluster, in conjunction with Microsoft South Africa hosted an Embedded, Web, Mobile and Software Development Technologies Conference on 31 August 2021, during a webinar on Microsoft Teams.

Giving insight into the conference was Ally Nsusa, who is from the DUT AppFactory. He professed that the fast advancement of embedded, web, mobile and cloud computing technologies brings a new paradigm shift from conventional computing and communications technologies.

“The internet is rapidly evolving with increasingly sophisticated devices, platforms, APIs, applications, and web browsers. Adding to this is the regular advancement of software development languages and data platforms, thus making it difficult for ICT professionals to keep abreast of new developments,” he said.

He indicated that the conference was aimed at showcasing the innovative work that AppFactories and interns are engaged in.
“It provides opportunities for experts, mentors and interns to share their experiences and insights. This conference also hosts invited keynote speakers who will engage the attendees with demonstrations, technical reports, tutorials, research talks and related discussions,” he said.

Giving the welcome address was Professor Sibusiso Moyo, the Deputy Vice-Chancellor: Research, Innovation and Engagement at DUT. She acknowledged the organisers, partners and attendees. Prof Moyo mentioned that one of the University’s key concern is about the employability and success chances of its students and also trying to create opportunities for students to start up their own enterprises and contribute to the economy. Prof Moyo relayed that the DUT AppFactory has been a very strategic initiative where the University is able to work with interns, DUT students, making sure that they get that exposure to develop mobile applications, to be able to help DUT improve its business processes.

This was followed by the keynote address which was given by DUT’s Chief Information Officer, Dr Progress Mtshali.

Dr Mtshali is a highly experienced academic and professional with a wealth of international experience, having studied and worked in the United States for over thirty-four years. Dr Mtshali has worked for IT companies such as Computer Sciences Corporation (CSC), Duck Creek Technologies, and Accenture Software as a software developer, principal software architect, and technical researcher.

He also has a patent in the United States Patent Office for the invention of the method to detect fraud in insurance claims. The invention was incorporated into three products that are currently sold by CSC. His speciality and interests include IoT, computer networking, data analytics, database management, cryptography, compiler theory, computer programming, programming languages, computational number theory, artificial intelligence, machine learning, and deep learning.

He focused his presentation on ideas around software development which is very near and dear to him.

“Since we looking at software development, I’m sure the AppFactory is a very good environment for us to create and build future innovators. From my point of view since I have been back from the US is that we don’t do enough around software development. Software development is very agile which is very true which means that young developers also need to be agile. Your responsibilities are going to change as you move forward in your career,” he said.

He pointed out that one of the things as software developers, their roles are going to change, so should their skills, emphasising the need to reskill constantly. He focused on the different areas as to what has happened in the field of software development and the reason why one should adapt. He mentioned the vital need to become part of such conferences to meet other developers and to share ideas as this is the norm in the United States.

From the agility of software development, how to become a successful developer was the next topic of discussion.

Speaker, Robert MacLean, a veteran software engineer based in Cape Town, looked at 14 Things One Needs to Be a Successful Developer.

He has led software teams at Amazon Web Services and Microsoft and built some of the largest systems for customers in South Africa.

“As we passed 140 years of software development, you would think the path to success has been worked out, documented, taught, and is largely understood and yet, most software is late, over budget, or full of bugs (sometimes all three). His talk focused on the only thing that one has control to change, which is oneself,” he said.

Robert spoke about the 14 things that developers should note when developing software. He emphasised that “coding is not software development” and that to be a software developer a person needs to add customer value, help your company grow and change our country.

Relaying the finer, technical aspects of “Being hands-on with Blockchain” was Julian Kanjere.

“Over the last decade, blockchain technology (BCT) has cemented its place in the emerging technology category with the potential to unleash low-cost and scalable financial innovation and solve challenges related to credible record-keeping, supply chain provenance and credential management, to mention all but a few. Broadly speaking, BCT can be used for record-keeping and transactional purposes, owing to its secure and tamper-resistant nature which enable it to be a trust mechanism between actors in a network,” he said.

However, he indicated that although it is the subject of many a conversation on innovation, the properties unique to problems that are suitable candidates to be solved by blockchain-based solutions are not always well understood.

He illustrated how non-standardised record-keeping for COVID-19 vaccinations can give rise to a lack of credibility-how can one actor prove that another actor’s claim to have been vaccinated is legitimate based on a stamped vaccination card. He also demonstrated how the COVID-19 vaccination register (CVR)-a blockchain-based web application solution can solve this trust problem.

“Using CVR, an administrator with a valid and funded Ethereum blockchain account can add entries to a blockchain-based register. Once added, this entry cannot be altered and is immediately accessible to anyone with a link to this decentralised and single source of truth,” he said.

His presentation further showcased an HTML5 JavaScript-based web application that is used to record COVID-19 vaccination entries, the web application, the smart contract and a local instance of an Ethereum blockchain network.

Speaker Allan Pead for the University of Western Cape AppFactory, who spoke on Automating Your Home or Office with IoT Central and Power Apps.

“Power Apps is a suite of apps, services, connectors and data platforms that provides a rapid application development environment to build custom apps,” he said. He looked at using both, along with Node-RED to leverage “low-code “to rapidly create scalable solutions to automate the home or office. He also spoke on a topic called: Keeping Your Plants Alive with an Arduino and Azure IoT.

Other speakers were Rory Preddy, from Microsoft SA, a senior cloud advocate who discussed Migrating/Modernizing Java Apps on Azure. In his session, Preddy walked attendees through the process of deploying, scaling and debug Java applications on Azure the Azure Platform.

The next speaker, Ntobeko Dindi from the DUT AppFactory, focused on how teams can use Azure DevOps to manage and deploy projects. The session also covered aspects of deployment and the use of Azure Pipelines.

Phila Dlamini from the DUT AppFactory highlighted his talk on Application Programming Interface (API) Security. In his session, he walked attendees through the processing of building a secure API using the PHP scripting language.

Nikhil Ramdav, who is from DUT’s AppFactory, spoke on Building Scalable Applications Using the ABP Framework.

He explained what ASP.NET Boilerplate (ABP) is, which is an open-source and well-documented application framework, created in 2013 by Volosoft.

“It is a complete infrastructure which uses ASP.Net Core to create Web Applications and Api’s by following the latest technology and practices around. It follows the DDD (Domain Driven Design) principle. It also provides a strong foundation for modularity, multi-tenancy, caching, domain events and background jobs which are visible to the developer in these applications,” he said.

Ramdav relayed on the benefits of ABP Framework such as the UI Helpers, a new super helpful front-end tool or feature, which offers reusable components which in turn offers less code duplication across a person’s project.

He delved into Logging. “ABP sets up ASP.Net Core’s logging system for you and it additionally logs all Entity Framework SQL Queries for easier performance debugging. Authorization: this implements declaration-based authorization with permissions and now has better support for Two-Factor Authorization and identity server from Microsoft. He then showcased how web applications can be designed and implemented by setting up the ABP framework and building a sample application.

In the next session, Clifford de Wit, tells the story of how the AppFactory started and how it grew into the programme it is today. De Wit is the CTO and co-founder of a new Digital business within the De Wit Metrofile’s group, Dexterity Digital.

He discussed the AppFactory Journey, speaking on Microsoft Student Ambassadors, emphasising the vital need to connect with other students who share the same passion is focused on Leagues and use tech to solve real-world challenges together. ​ He also looked at Imagine Cup and Hackathons, expressing the need to nurture their curiosity and making something that matters to one and develops their skills as part of the journey. Lastly, he focused on DreamSpark, (now Microsoft Dev Tools for Teaching) which puts professional developer tools, software, and services in the hands of faculty and students with low-cost subscriptions from Microsoft.

A robust panel discussion on the AppFactory Journey ensued and centred around what was responsible for the establishment of the AppFactory concept in South Africa. It also looked at the importance of AppFactory’s and internships for the South African economy and finally what future role could AppFactories play, with presenters consisting of Chair: Clifford de Wit (DexterityDigital.com), Nyaladzi Mpofu, (Microsoft SA), Leslie Price, (Microsoft SA) and Cassim Vanker, Director: (DUT AppFactory).

This was followed by the presentation made by Scott Hanselman, who works in Open Source on .NET and the Azure Cloud for Microsoft out of his home office in Portland Oregon. He delved into Mentorship versus Sponsorship – Growing the Next Generation of Developers Through Nurturing Stories of Tech.

In his session, Hanselman unpacked the relationship between mentors and sponsors. Hanselman reminded attendees that although there were senior engineers in attendance, that in reality “we are all amateurs”. Recalling his school days, Hanselman remarked that he does not use any of the technologies that he studied in school. “So why did I go to school?” he asked. Unpacking this Scott suggested that “at school, we are learning how to learn” and these are the skills that a software developer should have.

Cassim Vanker, Director of the DUT AppFactory, said: “As software development evolves at a rapid pace, keeping up with the latest developments can be daunting. It was our goal to host this conference so that students and interns could learn, share and collaborate. Also, from the feedback that we received from attendees, the event was a resounding success.”

Leslie Price the EEIP AppFactory Lead from Microsoft South Africa, said: “The DUT AppFactory Conference showcased the calibre of world-class talent that we have ‘right here’ in South Africa! Super valuable, inspiring and honest learnings were shared especially to the benefit of aspiring junior talents who attended the event. Our local industry needs to continue the journey to keep things very real, actual, and to mould and build quality, home-grown talent for South Africa.”