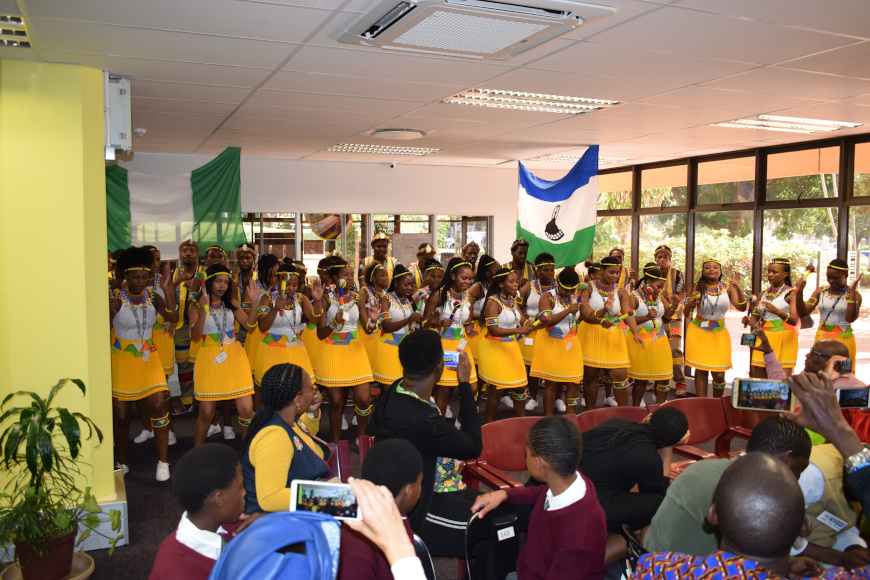 A traditional dress code showcasing an array of beautiful, printed skirts, shirts, dresses and beaded necklaces, were the order of the day at the Africa Day Celebration which was held at the Alan Pittendrigh Library, Steve Biko Campus, last Friday (31 May 2019).

Local and international DUT students, staff and external stakeholders graced the event which was organised by the Durban University of Technology’s (DUT’s) International Education and Partnerships Department in collaboration with the DUT Library under the theme: “Showcasing My True Africanism”.

Africa Day (formerly African Freedom Day and African Liberation Day) is the annual commemoration of the foundation of the Organisation of African Unity (OAU) (now known as the African Union) on 25 May 1963. It is celebrated in various countries on the African continent, as well as around the world. This day, 25 May 2018, was declared as Africa Day as a symbol of unity among all Africans. The day also acknowledges the progress that Africans have made while reflecting upon the common challenges they face in a global environment.

The charismatic master of ceremonies, Chidi Edeh introduced the various speakers and items that were on offer for the day, ranging from unique African fashion displays, traditional dancing, poetry recitals, as well as various speeches given by speakers on topics like what it means to be a ‘man’ in Africa and an African woman’s perspective on her role as an African woman in Africa.

Some of the highlights of the event included the speech made by DUT’s Library Director Lucille Webster, where she spoke more on the role played by African Libraries in preserving African literature, folklores and the history of Africa.  She added more on the role librarians played in Africa, and explored further on the cultural heritage in Africa.

“In Africa, we have 54 independent countries, and between 1500 and 2000 spoken languages in Africa. In South Africa, we have 11 official languages, but culturally we  as South Africans know that there are more languages than that. So, how do we go about preserving our cultural heritage for posterity? According to Western roles, this traditional role has been given to libraries and museums, these institutions chronicle the past and they usually do this in writing and artefacts,” she said.

Another highlight of the event was a presentation by Fine Arts lecturer, Themba Shibase, who elaborated more on the significant role Art has played in African history and how it has also submerged to the current issues in Africa.

Grade eight pupils from Banqobile High School thoroughly enjoyed the festivities, adding that it was wonderful to celebrate their Africanism and know where they came from and where they are going.

DUT’s ENACTUS Marketing and Public Relations Officer, Sondelani Mwandla, said: “Africa Day means reclaiming one’s African identity, being in a dynamic, diverse society, as well as being in a space where imperfections are perfect,” he said proudly.

The general consensus from many attendees were of how proud each and every person was of their heritage, their connectedness to the African soil, making every day Africa day and knowing Africa has a bright future ahead.

The event concluded with an art exhibition at the DUT Art Gallery, a tasting session of African traditional cuisine and amazing African renditions of cultural songs as well as dance from the DUT Intercultural studies students.