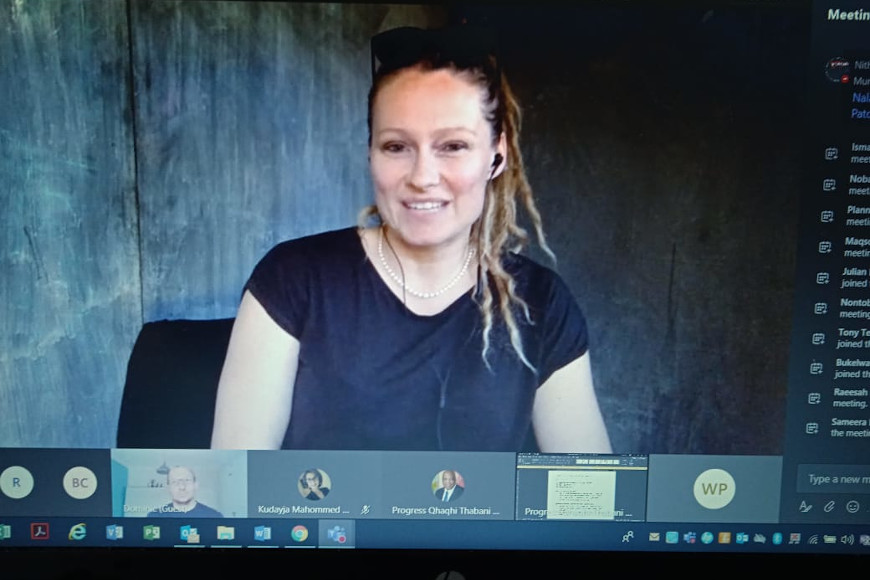 The first Durban University of Technology (DUT) Data Day (D3) was held as an exhibition of data at the end of August 2019. This year, the event is taking place virtually over five days from 2 to 6 November from 13h00 onwards on MS Teams.

DUT Data Day was first held over a two-day period and included data training workshops and an exhibition by DUT departments on the data emanating from their field of practice. The university’s student tracking system (Autoscholar), and the DUT data warehouse (PowerHEDA) were also officially launched at last year’s event.

This year, the online event provides an opportunity for the DUT community to showcase and learn about the different types of data, and how one can use data at the university. DUT Data Day is about Knowing, Doing, Impacting and Transforming.

Officially opening the virtual event was DUT’s vice-chancellor and principal Professor Thandwa Mthembu, who said that DUT Data Day (or D cubed as some call it) aims to raise awareness about the institutional research and institutional data sets that exist across the university.

“It also aims to increase our understanding about how these are being used to support evidence-led decision-making in support of Envision 2030’s twelve strategic objectives. Also, the anticipated outcomes of the event include strengthening the awareness and use of data specifically aligned to our Envision 2030, to strengthen a data-evidenced culture and to develop a community of practice around data use at the university,” he said.

He welcomed the invited external speakers, each of whom engage with data at a practical level across various sectors of society.

“We have our guests from the public and private sectors whose interests and work deal with using data in a practical way. They will be sharing their views on the role that data plays (and would play) over the next 20 years – particularly in improving lives and livelihoods, which is a key outcome envisaged in DUT’s strategic plan. Welcome to Dr Adriana Marais (#Proudly Human; Foundation for Space Development), Asif Vally (Microsoft South Africa), Dominic Albrecht (Digital Planet) and Richard Gevers (Open Cities Lab).

Prof Mthembu also took the opportunity to thank the organisers of this event, driven from the Planning Office – Dr Koo Parker, Ashton Maherry, Mandla Lukubeni and Sean Carte. “Your innovation and ability to pivot what was envisaged as a physical exhibition to an online programme espouses the characteristics we wish to see in our people,” he said.

DUT’s Chief Information Officer, Dr Progress Mtshali introduced the panel, the day’s proceedings and the topic of discussion which centred around the role of data in the world of 2030 and beyond. Questions posed to the panellists were on what could or should the world look like in 2030 and beyond and how could we get there? What data could or should be important? How will data be used to improve lives and livelihoods? What data and other skills (new/existing) will be (or become more) important in the world of 2030 and beyond?

Speaking on what the world could look like beyond 2030 was Dr Marais.

She is a Director at the Foundation for Space Development, an initiative of which is Africa2Moon, Africa’s first mission to the Moon, to positively impact lives in Africa through space technology. She is also a member of the South African Government Ministerial Task Team on the 4th Industrial Revolution, Faculty at the Singularity University and Duke Corporate Education, and an astronaut candidate with the Mars One Project.

“Currently I’m thinking of 2030 and beyond. Talking about 2030, according to a certain South African born tech millionaire, Elon Musk, we will already be in Mars by then. So that is one potential outcome that will certainly expand our view of ourselves, our society and our technological capabilities, but let’s take a few steps back.

I have a background in theoretical physics and looking at the background, and looking back at the data which has resulted in the data enriched scenario that we find ourselves in 2020, The importance of connectivity during the pandemic and associated lockdowns has really emphasised how essential having data in the current year, pandemic or no pandemic is,” she said.

Speaking further was Valley, the National Technology Officer at Microsoft, spoke on various tech companies that through the COVID-19 crises have emerged stronger than before.

He emphasized that one of the prominent is the usage has been of Artificial intelligence (AI) which refers to the simulation of human intelligence in machines that are programmed to think like humans and mimic their actions. He said that AI is really progressing and to levels that have never seen before, like in South Africa where AI readiness adoption has taken place, for example with e-filing by SARS, saying that all these technologies cannot be driven without data.

Albrecht, a campaigner for data literacy advancement, firmly believes that this area holds huge potential as a differentiation for South Africa in the global technology game.

“Estonia is an amazing example of a country that has adopted the data way of dealing with its citizens,” he said.

Adding to the conversation was the founder of Open Cities Lab, a civic technology lab with a focus on the development of open data for application to urban challenges operating within cities in Africa.

Gevers stressed that those that had already deployed open source and open data were in a much better place for crisis response and dealing with a changing world.

“No public organisation has the funding to enable it to not do open data and build inter organisational open data; change management, culture and leadership support and buy-in are critical for success,” he said.

The following three days are devoted to data presentations and discussions aligned to the four perspectives of DUT’s strategic plan, namely Stewardship, Systems and Processes, Sustainability and Society.

One of the speakers at yesterday’s webinar which focused on Systems and Processes was CELT’s Pregalathan Reddy from CELT, who spoke on the TLZ Moodle. He gave a glimpse into an aspect of data collection and use to inform the provision of a robust Digital learning platform known as TLZ Moodle. Also presenting yesterday was DUT’s Cassim Vankar, who spoke on the developments pertaining to Information Technology projects such as the DUT AppFactory at the institution.

“The DUT AppFactory is a ‘first of its kind unit’ operating at a university in South Africa. The unit aims to empower, train and mentor interns by providing them with opportunities to work on real-life projects,” he said.

He also spoke further on the unit’s rolled out projects as well as the new exciting eRAMP rollout.

“Another exciting project that has been rolled out in the faculty of health science is the Electronic Research Administration and Management Platform (eRAMP). The automated systems being developed by the DUT AppFactory help reduce the carbon footprint through the process of digital submissions. It also provides a seamless way to track and collaborate on submissions,” he said excitedly.

On the fifth day there will be discussions on society and on the last day, a panel discussion will be held by DUT Senior Executives on their evidence-led management practices. The panel will include the DVCs, the CFO, Registrar and the Director – Midlands. They will share ideas and activities about data and how data are and can be used to inform decision-making and progress both at DUT and in society at large.

The objectives of the panel discussion are to motivate DUT staff and students to frame their work, research, and volunteering activities within the bigger picture of what their world can look like in the future; encourage a culture of data or evidence-led decision making and thinking; and to inspire change makers and leadership for a better society.