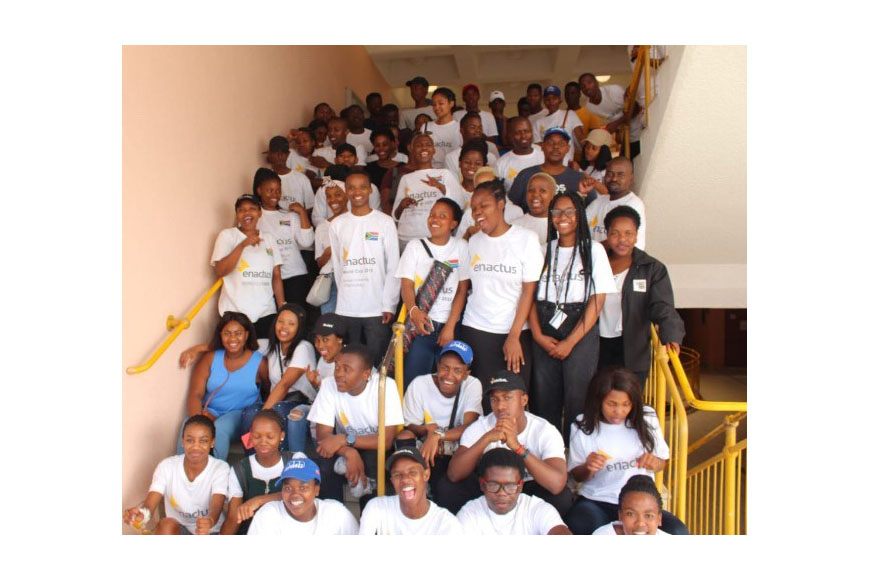 The Durban University of Technology team was recently named the first runner-up in the 2020 Enactus National Championship after participating in the first Enactus South Africa Virtual National Competition.

DUT Enactus President Mthunzi Mapatwana said: “As the first runner-up, we are excited about how we have told our story and the impact we have had in different communities. For us, this was more than just a competition but it was a national platform to expose our creativity and showcase our project to South Africa at large. We are proud of who we are and what we have grown to become. For the past 12 years, this was just a dream to be heard and be recognised as one of the most active and hardworking teams in the Enactus Community,” he said proudly.

Elaborating more on the competition and what it entailed, Mapatwana said Enactus is an international organisation that brings together students, academics and business leaders who are committed to using the power of entrepreneurial action to enable progress around the world.

A total of 16 Enactus University teams made it through to advance and participate in the Enactus South Africa National Competition this year. Under the theme, “LEAD CHANGE,” Enactus transitioned this event from a contact to a virtual competition experience.

Mapatwana said the competition was very challenging at times. “First, because of the pandemic and the team not being able to be together to realise the vision, we had to work in the most unusual way to come up with a pivoting strategy to keep the project running and ready for the competition. This was not the normal we had planned for, therefore we spent most of the time to find alternative ways to work in isolation instead of scaling our projects,” he stressed.

This year, the DUT Enactus teams’ presentation was about their agricultural project (Agribusiness Unit). He said that this project addresses three social issues which are plastic pollution, food insecurities and water scarcity. “Plastic pollution has become a global problem as plastic often makes its way to the ocean killing marine life. Tackling this problem, we took a challenge to collect discarded plastic bottles to repurpose them into building sustainable greenhouses for agricultural purposes. The greenhouses are used as seeds germination stations till they are seedlings and they are then transplanted to the garden for them to grow. Therefore, this addresses the issue of food scarcity. In our greenhouses, we have also included a drip irrigation system thus addressing water challenges faced by our communities. And this project this year, we have directly impacted over 4000 people and indirectly impacted over 20 000 people in eight different communities such as (KwaMashu, Adams, Mthaleni, Mangethe, Lambothi, Cato ridge, Kraanskop, Appelsbosche, Molweni and Mtubatuba) around KwaZulu Natal,” he said.

Mapatwana also highlighted that next on the agenda for the DUT Enactus team are four projects. The first being Agribusiness. “We want to increase partnerships with schools and communities in KwaZulu-Natal and create other partnerships in the country. To launch our agricultural book for primary school learners and develop an App and website to teach people about home gardening. We want to expand the reach of our project to more disadvantaged communities of KwaZulu-Natal,” he said.

The second project is called Finiks. Mapatwana said the aim of this project is to create a sustainable market for our soap project by introducing a sales agent model: in this model. He also added that they will be looking for community members and DUT students who will sell their products. “We will sell to them at a factory price and they will then add their own mark-up to reach to the selling price of the product. This is how they will be creating an additional income for themselves,” he said.

Also, to ensure better sanitation in public schools, the DUT Enactus team have decided to launch a new product line which will be their hand-wash soap. “This programme is still in discussion phase, hence we are looking for more collaborations and sponsorships to achieve this vision,” he added.

The third project is called ICT. As Enactus DUT, they have entered a National MTN ICT Challenge. This is where MTN in collaboration with Enactus South Africa, challenge University teams to come up with innovative ideas to address social challenges under the categories of Agriculture, Health and Education. “Enactus DUT entered this challenge with our gaming App that addresses issues in the Educational sector. In this competition, we have made it to the top 12 universities in South Africa to be funded for the prototype of this project by MTN SA Foundation,” he said elatedly.

The fourth project is called Umlilo. Mapatwana said that it aims at recycling plastic to building materials. He indicated that the Enactus Global Office have launched a competition called 1Race4Oceans. “The aim of this programme is to promote the recycling of plastic in diverting it from making its way to the oceans, killing the marine life. With our Umlilo project, we entered this competition to showcase our ingenuity in recycling plastic. We are proud to announce that we made it to Top 24 universities globally. We are waiting for the results of the Top 12 finalists to begin with our prototype. With this project, the future is bright,” he said proudly.

Furthermore, DUT Enactus Chapter Program Director, Lana- Ann Brady highlighted that, “The scaling of the project has directly impacted 4000+ people and indirectly impacted over 20 000 people in eight different communities in the eThekwini outlying areas. The student volunteers who make up the Enactus DUT team continue to work tirelessly to inspire thought leadership and creativity in solving social problems in an endeavour to address the Sustainable Development Goals”.