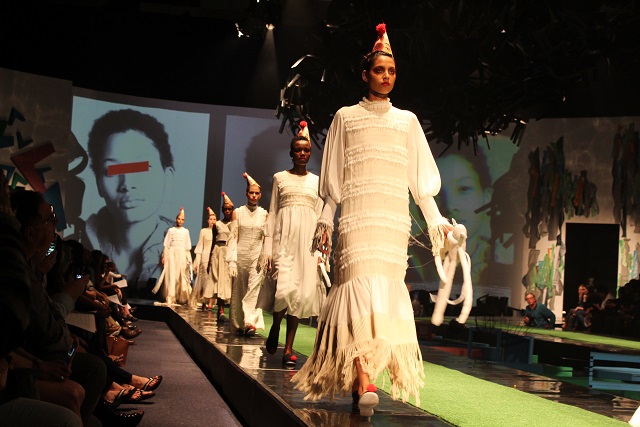 Showcasing the amazing craft of students, the Fashion and Textile department at Durban University of Technology (DUT) recently hosted its annual fashion show at the Fred Crookes Sports Centre.

The aim of the annual event was to give students a platform to showcase their dynamic and exciting garments under the theme of “False Gods”.

This year’s panel of judges involved designers such as George Vorster, Gavin Rajah and the famous Holmes Bros, to name but a few. The awards that were to be won included were for the Most Innovative Range, Best Range on Show, Most Commercial Range, Best Menswear range and the Best Technical Student.

The winner of the Best Range of the Show, Fikile Sokhulu, said she is all for feminism and after hearing about the theme, she knew there and then what she was going to do.

“The idea was to create a collection inspired by feminine delicacy. A woman as a goddess was the interpretation of the theme. For her, Winning Best Range on show was an amazing feeling. I plan on furthering my studies or venturing into an internship,” said the delighted Sokhulu.

For the winner of Best Recognition Award and Most Innovative Range, Courtney Hunt, when she was assigned with the theme, she wanted to address a social issue very close to her heart which is on gender binary. Her focus was on a person who is daring in their pursuit to address social issues.

“I essentially wanted to develop a range which focuses around unorthodox gender neutral designs. I drew my inspiration for my colour palette from local and international street artwork and design conceptualisation from European fashion. Winning these awards has been an affirmation of my aspirations and I hope to do them justice,” said an elated Hunt.

She added that her future plans are to continue to create clothing which aims at eliminating conventional ideals of fashion.

The Most Commercial Range Award went to Aaliya Randeree, for Best Recognition Award was Courtney Hunt, Best Menswear range award was taken by Sipho Mbuto, the Most Technical student award was handed to Noreen Maphumulo and the Judges award went to Khathija Khan.

Pictured: Fikile Sokhulu, showcases her range which won the Best Range on show, at the 2017 DUT annual fashion show.