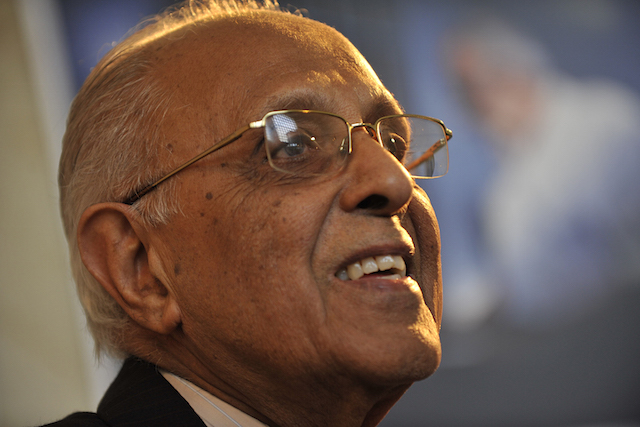 Liberation struggle veteran, human rights activist and struggle icon, Ahmed Kathrada, will be awarded an Honourary Doctorate in Arts and Design by the Durban University of Technology on Friday, 22 April 2016 at 14h00.

The Honourary Doctor of Philosophy degree will be awarded to Kathrada in recognition of his outstanding contribution towards South African human rights and social justice.

Kathrada will be honoured during the Faculty of Arts and Design’s graduation ceremony to be held at the DUT Fred Crookes Sports Centre, Steve Biko Campus.

DUT honourary doctorate degrees are conferred in recognition of the positive work that prominent South Africans have shown in the country. Kathrada’s Honourary Doctorate will acknowledge his contributions to literature.

Kathrada’s interest in literature began at a tender age of 12, when he distributed political leaflets. Although he dropped out of his formal studies in matric to become a full-time political activist, he was also amongst the first Robben Island prisoners to complete a university degree. After this, he continued studying and completed his second degree and two honours degrees.

His many writings have become pearls of wisdom. This includes his books, such as Memoirs, where he reflects on his time incarcerated on Robben Island and Pollsmoor Prison. From the Island, Kathrada also wrote many letters to his niece, which is now captured in a publication.

Interestingly, Kathrada was also chosen by his fellow prisoners to head their “communications” work on the Island. Working closely with Mac Maharaj and Laloo Chiba, Kathrada creatively came up with ways to keep the channels of communication open among prisoners and the outside world.

He also contributed significantly to Nelson Mandela’s autobiography, which was smuggled out of prison and formed the basis for Long Walk to Freedom.

For interviews and RSVP’s to the graduation ceremony, members of the media must contact Noxolo Memela, Media Officer at the DUT on noxolom@dut.ac.za.