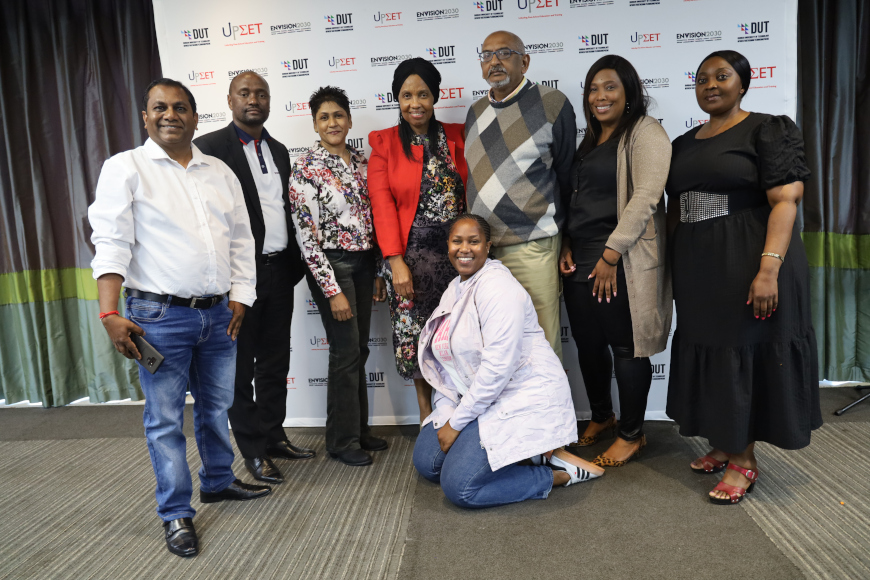 The Durban University of Technology (DUT) hosted the Unfurling Post School Education and Training (UPSET) Articulation Workshop at the Coastlands Hotel on the Ridge on Wednesday, 7 September 2022 and Thursday, 8 September 2022. The workshop focused on bridging the divide between the Curricula and Qualifications of Technical Vocational Education and Training (TVET) Colleges and Higher Education Institutions (HEIs).  UPSET is a national articulation initiative funded by the Department of Higher Education and Training’s (DHET’s) University Capacity Development Programme (UCDP). It is led by the DUT and supported by the South African Qualifications Authority (SAQA) and the National Research Foundation (NRF).

In his welcome, overview and introduction of the two-day workshop, Professor Darren Lortan revealed that the purpose of the workshop was to establish protocols for jointly offered new and additional Higher Certificates. These qualifications would be formally offered by TVET Colleges in partnership with DUT (and other interested HEIs).

Prof Lortan has been tasked with the responsibility of ensuring that the project goals and objectives are accomplished, and the planned deliverables are accounted for. He highlighted that DUT manages the UPSET Project on behalf of DHET, which together with three other Higher Education Institutions that have already developed articulation initiatives with TVET colleges, are the first cohort of participating regional/provincial hubs. These HEIs are the Cape Penninsula University of Technology, Central University of Technology, and the University of Limpopo.

“The UPSET project was launched last year in July 2021. In August 2021, we embarked on the first workshop and at the national level we invited the CEOs of the SAQA, the Council on Higher Education (CHE), the Universities South Africa (USAf), and the President of the South African Public College Organisation (SAPCO), to explore the roles their organisation could play to enable the implementation of articulation across South Africa.  This week’s workshop has brought together representatives from all nine TVET Colleges in KZN, who have been mandated to contribute to the development of articulation initiatives in consort with heads of departments and other representatives from DUT. Our conversations were centred around jointly offered Higher Certificates where the TVET College will do the teaching on their campuses, but the students will be our students, doing our qualifications,” he said. He added that these were not the only articulation initiatives we were exploring.

He further explained that the UPSET workshop was also held in order to benchmark, build and to maintain better working relationships between DUT and TVET Colleges.

He also shared propositions made by the head of departments at DUT.

Prof Lortan outlined the rationale for the offering of faculty-wide HCs. He explained that in such an offering the notion of a cognate qualification is broadened to include several, related disciplines, which would include a menu of modules that are fundamental to most programmes within faculties, for example a Higher Certificate in Engineering or a Higher Certificate in Accounting. “Enrolment planning including articulation from such HCs may less restrictive or onerous, as more than one diploma or degree becomes the target qualification of the contemplated articulation, resulting in a greater channelling of holders of the HC. Depending on the extent of credit accumulation and transfer contemplated in the articulation into the diploma or degree, generic service modules along with selected modules already offered in the diploma/degree could be included in the curriculum of such HCs,” he said.

Prof Lortan commented that this could mitigate the challenge of the anticipated loss of teaching input units (TIUs) for modules that are granted exemptions in diploma /degree.

“The TIUs would have accrued to the department offering such modules irrespective of whether they are offered in the HC or the subsequent qualification,” he added.

Attendees were grouped according to their qualifications to begin exploring whether any of the models suited their qualifications. The groups were required to begin the work of developing articulation arrangements by attempting to align existing qualifications by exploring overlapping curricula. Where this was not possible or suitable, they were asked to explore alternatives. The groups committed to work with each other beyond the workshop. The groups would be reconvened in October to take the work forward until formal arrangements were put in place to develop and implement articulation initiatives among the organisations represented at the Workshop.

“I was so overwhelmed by the number of attendees at the UPSET workshop and the way people were engaging with tasks and conversations that were held, also one can tell that these people know their story judging by the points that they raised and the questions that they asked,” said Ronald.

Adding to his comments, Prof Lortan indicated that the attendees have an understanding that there will be some obstacles that they will encounter on the way like the issue of funding, students who might be funded by NSFAS in TVET Colleges and require further funding at universities; and the timeframe to do this work. He was impressed by the participation of DUT staff because Higher Certificates at DUT have become unpopular and a matter of great discussion at academic leadership meetings.

In his vote of thanks Prof Lortan thanked all the attendees for making the event possible and also for their robust engagement.

Pictured: Attendees at the UPSET event.