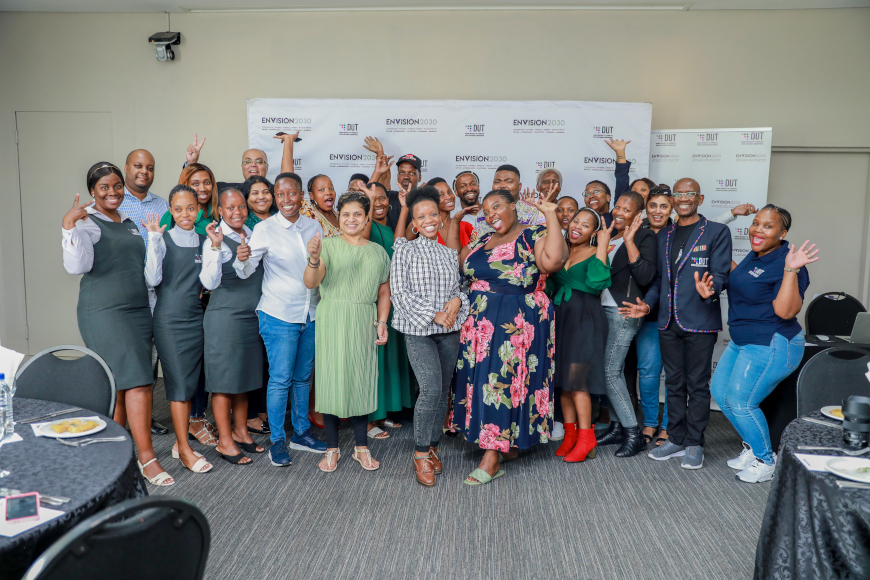 The Communications team at the Durban University of Technology (DUT) hosted the DUT Media Day luncheon at the Riverside Hotel Business Centre on Friday, 04 November 2022.

The aim of the event was to meet with journalists and editors, to discuss the university’s ENVISION2030 strategy, to introduce the media to the recently launched DUT tagline (Creative. Distinctive. Impactful.) and to provide insight into the university’s plans for the decade ahead.

Dr Joe Molete, DUT Midlands Campus Director; Mr Alan Khan, Senior Director of Corporate Affairs and the DUT Communications team used the opportunity to engage with journalists and editors and to extend the university’s gratitude for the continued support, in informing members of the public about student, staff and alumni excellence, for providing editorial support and coverage that highlighted the research, innovation and entrepreneurship that is taking place at DUT and for regularly consulting with DUT experts on various stories for publication.

The Programme Director was the former Mr DUT, Mr Nkululeko Mbatha, who is also the Administrative Assistant at the DUT Communications. His charm kept the media captivated throughout the event.

Delivering the opening remarks, Mr Khan began by informing the media that Mr Mbatha was recently on stage at the Inkosi Albert Luthuli Durban International Convention Centre (Durban ICC) modelling the DUT blazer, which was launched at the DUT Innovation Indaba Gala Dinner. He expressed that it was good to see so many members of the media attend the luncheon and he was proud that a number of guests were DUT alumni.

“All of you have a vested interest in helping to promote the research, innovation and entrepreneurship that is taking place at DUT. This is important for our city, our province and for our continent. I am extremely grateful to my colleague, Ms Noxolo Memela and her team from Communications for hosting the DUT Media Day, for giving us a chance to connect, to break bread and to enjoy some interesting conversations,” said Mr Khan.

Although he joined the university as a staff member in July 2011, Khan also explained that his relationship with DUT started in 1990, when he was a student studying Chiropractic, then he joined the campus radio station and went on to study journalism and graduated from the university, going on to have an exciting career in the broadcasting world.

Mr Khan shared that three weeks ago, at an event in London, Times Higher Education released the 2023 World University Rankings and DUT was ranked in the Top 5 of all South African Universities for 2023 and also the number one University of Technology in South Africa.

“That was a remarkable achievement, considering that our university, in its current form is just 20 years old and we are already ranked as one of the Top 5 universities, out of the 26 public universities, in the country. We were also in the Top 5 last year. It shows consistency and we have every intention to grow in the years ahead. We have developed and implemented a strategy called the ENVISION2030, which encompasses our vision, our values and principles. We are values and principles based organisation and the core of our DNA is people-centred and engaged; innovative and entrepreneurial,” added Mr Khan.

He also shared that DUT recently unveiled two of the ENVSION2030 monuments, one on the Steve Biko campus in Durban and the second on the Indumiso campus in Pietermaritzburg, where DUT Vice-Chancellor and Principal, Professor Thandwa Mthembu entombed a time capsule which included a letter from Prof Mthembu, which he addressed to whoever will be the Vice-Chancellor in the next decade, when time capsule is unsealed.

“A series of questions were asked which gives us some insight as we finalise our marketing plans for 2023. It will guide us in terms of which advertising platforms to explore, which media titles are popular in various categories, how is the brand received and what is the public image and perception of our university. I was absolutely delighted with the results, which will be released before the end of the year. I can confirm that DUT’s positive image perception is up to 92% across the five categories. It was 58% in 2015 and increased to 79% in 2020. So the continued growth in our brand image is encouraging. Our intention to promote the excellence at DUT plays a positive role in highlighting the research, innovation and entrepreneurship that is taking place at DUT,” said Mr Khan.

He also expressed his gratitude to the keynote speaker Dr Joe Molete, the DUT Midlands Campus Director, whom he described as not only a 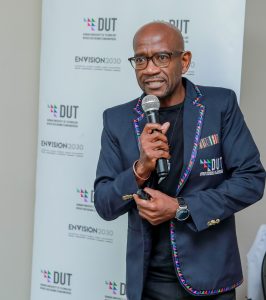 Delivering his keynote address, Dr Molete began by explaining to the media that DUT launched a new strategy called ENVISION2030. He indicated that with this strategy, DUT hopes to transform the university, transform the surrounding communities and transform the world. He also shared the exciting project that they are driving in the Midlands, together with the Minister of Higher Education, Dr Blade Nzimande, called the Imbali Education and Innovation Precinct (IEIP).

Explaining why DUT is transforming, Dr Molete said: “We are striving to become a fourth generation university. The university started many years back with a strong focus on teaching, then they added research. A few years ago it was all about innovation and technology transfer as we continued engaging with industry. Now the university is heavily involved in regional and economic development. We want the university to move from an “Ivory Tower” mindset, to say that they need to be managed in the communities where they are and assist in transforming the university. The other reason is that the university is also driving impact, to determine its impact in the society,” said Dr Molete.

Dr Molete further explained through ENVISION2030, DUT wanted to mould people who are creative, innovative and entrepreneurial, people who will actively participate in the growth of the economy. He explained the four perspectives of ENVISION2030 and its objectives. Dr Molete left the media excited and ready to know more about DUT’s exciting projects and some guests requested one on one interviews with him.

After Dr Molete’s captivating presentation, the media had a chance to answer ENVISION2030 related questions based on Dr Molete’s presentation. Prizes were handed out to those journalists who had provided correct answers.

In closing, DUT Communications Manager, Ms Noxolo Memela thanked the media for honouring the invitation and for the continuous support over the years. She mentioned that Communications intend to host this event annually, with a hope of strengthening the relationship with the media and in building a mutually beneficial partnership.

Pictured: The media with the DUT staff members at the DUT Media Day luncheon.