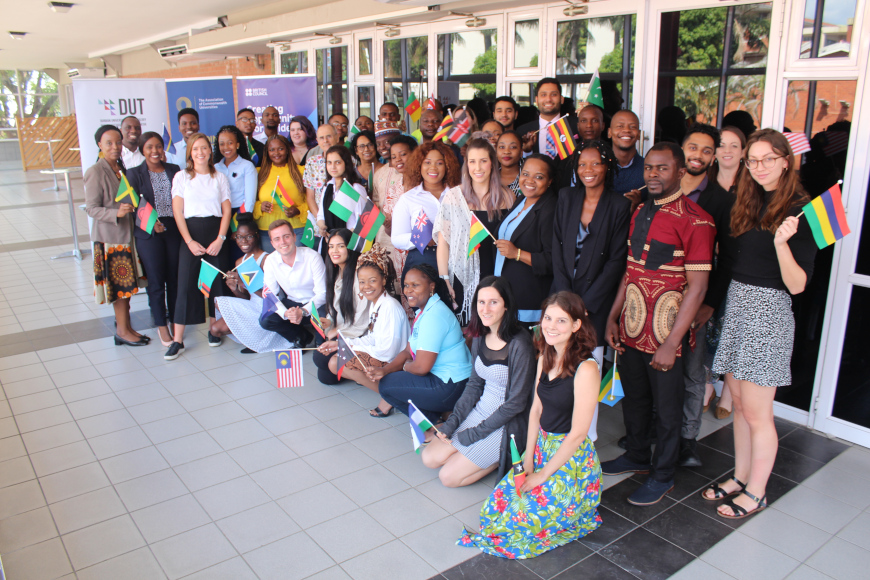 The Durban University of Technology (DUT) were the hosts of the third Commonwealth Futures Workshop, a four-day event that took place from 11 to 14th March 2020, at the Ritson Campus, Hotel School Conference Centre.

The workshop was a joint initiative of the Association of Commonwealth Universities and the British Council. The international gathering saw DUT hosting 60 students from 13 countries during a four-day event. These countries include Nigeria, Australia, India, South Africa, Canada and the United Kingdom.

During the workshops, students from across the Commonwealth were given an opportunity to share their individual experiences, whilst they obtained valuable skills that will assist them in driving peaceful and effective change in their communities and institutions. All themes featured in the workshops were of global importance, with the aim of creating cohesive societies. The Commonwealth Futures Workshop also celebrated the 150th anniversary of the birth of Mahatma Gandhi. Gandhi lived in India, South Africa and the United Kingdom and therefore these were the host countries selected for the workshops.

Speaking during the opening session on Wednesday, Dr Faye Taylor head of Strategic Partnerships at the Association of Commonwealth Universities (ACU), said that universities have the capacity to change the world. She pointed out that 60 percent of the Commonwealth are under the age of 29, and therefore they are the leaders of the future world. Dr Taylor also emphasised that the voices of young people have become more important than ever, and made notable examples of student involvement in subjects like climate change, LGBT rights, gender based violence and access to education.

“The main objective of this event is to hold a series of activities that will make students feel more empowered to go back to their own institutions and make a change in whatever field and context. We want them to network and to form collaborations, so that they can draw from other individuals,” said Dr Taylor.

The programme also saw various panel discussions taking place during the week. One of these being a discussion on leadership. The session was led by gender activist Janine Hicks, political analyst Lukhona Mnguni and environmental activist Desmond D’Sa.

Unpacking sentiments on leadership, pertaining to gender equality and climate change, Janine Hicks encouraged individuals to find the relevance of a large issue, when trying to aid to an effected community. She said that individuals should consider how an issue like climate change will affect the lives of ordinary people within a community. Hicks further encouraged students to get individuals with decision-making power to become interested in the issue they are trying to address, in order to make an impact on policy debates. Finally, she advised students to draw on the support of a team during the process, as well as to constantly involve the effect communities during the process.

Other subjects addressed during the panel discussion was the importance of empowering communities with knowledge to involve them in the fight for justice. As well as cultivating a culture of collaboration amongst scholars, as opposed to one of toxic competition.

The workshop concluded on Saturday, with a special tour of the Gandhi Settlement in Phoenix, with a walkabout led by Ela Gandhi, the granddaughter of Mahatma Gandhi.