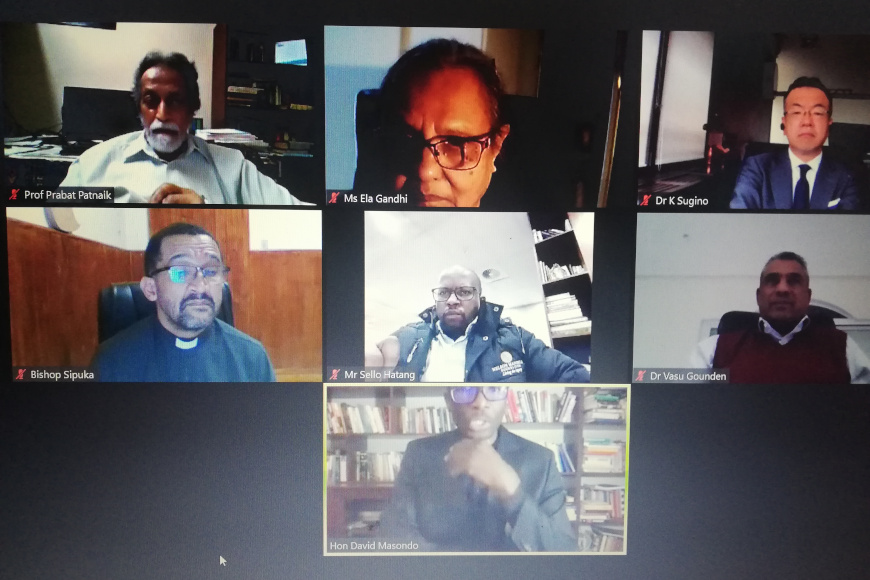 The Durban University of Technology (DUT) hosted a two-hour webinar on COVID-19: Time for New Visions About the Meaning of Politics, Democracy and Mass Resistance on Microsoft Teams on Monday, 20 July 2020.

This webinar which was attended by distinguished guests was facilitated by DUT’s Senior Lecturer in the Department of Public Management and Economics, Dr Strini Pillay.

Prof Prashad is the Executive-Director of Tricontinental Institute for Social Research and the Chief Editor of LeftWord Books. He is also the author of thirty books and is a former professor of International Studies at Trinity College, Connecticut.

Mphutlane is a South poet, essayist, cultural and political activist of the broader Black Consciousness Movement. He is also a former Deputy-President and Secretary-General of the Muslim Youth Movement of South Africa.

Zeefuik is a writer whose work focuses on representation, inclusivity and social justice. She focuses on Africentred perspectives and decolonizing knowledge institutes.

In welcoming the special guests, the Deputy-Vice Chancellor: Research, Innovation and Engagement, Professor Sibusiso Moyo said the partnership between DUT and Umtapo which they were hosting is that the focus of both organizations is on social justice, and making sure that their communities are mobilised in responding to the changes and the political stances they are in.

“For us as the Durban University of Technology, we have over 33 000 students, located in KwaZulu-Natal. We are all affected by the current pandemic. Yes, our lives will never be the same, but community engagements amongst scholars, what sorts of changes we should be focusing on. As the university we train a lot of students, our role in the training sector we need to make sure that people not only graduate with degrees but also create jobs. We need to make sure that we make students to be conscious of their environment and communities they come from. They need to be able to look at their situations and see what solutions they can make to improve the lives of those people,” said Prof Moyo.

She said these types of engagements can help people to think beyond just what they are going through right now.

Prof Prashad said one of the greatest challenges for the world capitalist system is that half the employable people in the planet are not employed at this time, which is a striking statistic.

He said this is not just the global pandemic in terms of the COVID-19 but also a hunger pandemic.

“We see mostly the advanced capitalist estates demonstrate once again that they would prefer to have security guards, guard the excess food that’s produced rather than deliver it as relief to the hungry. The food and agriculture organization estimates that 2.5 Billion people are going to suffer from hunger during the lockdown,” said Prashad.

He said the COVID-19 debt crisis is going to bankrupt many developing countries and it will take them about two decades to recover.

Amsterdam based writer, Zeefuik said this pandemic reveals the inequalities between the North and the South globally.

She also talked about racism and the Black Lives Matter campaign.

She said it is about time that black people do not become apologetic about what is good for them and taking care of their homes.

Mphutlane said there is always an interaction between social political economic and cultural arrangement as well as the natural world.

He said if people destroy the environment and the other beings, they are destroying the possibilities for their own lives to be sustainable.

Mphutlane also pointed out that he sees no point in countries paying off Apartheid debts, that money could be used to service the people in those struggling countries.

Dr Pillay advised that similar engagements should also involve the students as they are the future leaders.

Pictured: One of the COVID-19 webinar’s speakers, Prof Vijay Prashad with DUT’s Senior Lecturer in the Department of Public Management and Economics, Dr Strini Pillay during the online dialogue held on Microsoft Teams.