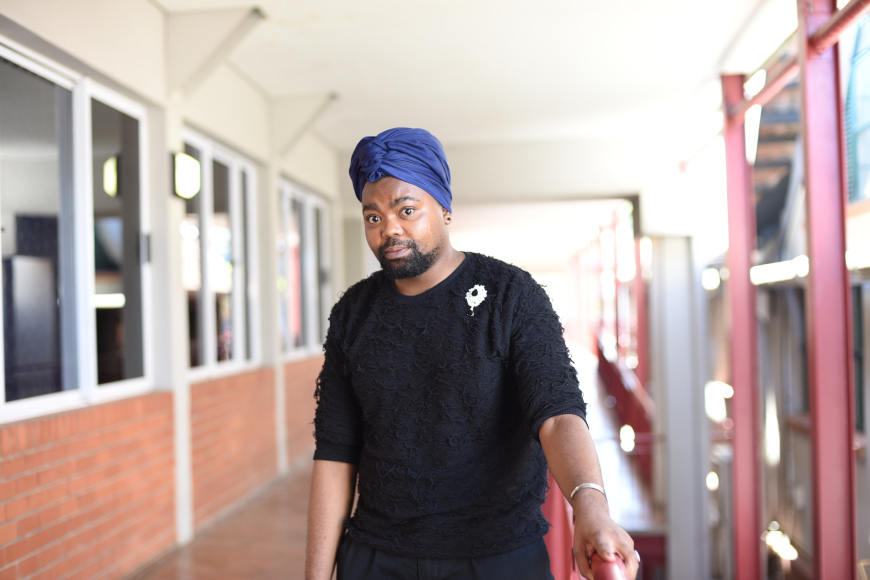 The Faculty of Arts and Design at the Durban University of Technology (DUT) joined the fight against the recent homophobic killings by hosting a webinar on South Africa’s Homophobic Hate Crime Crisis last Friday, 25 June 2021, via Microsoft Teams.

The thought-provoking and distinct dialogue was part of the Executive Dean’s Dialogue Series, a forum for discussion on topical issues such as Gender-Based Violence (GBV), inequality and human rights.

Facilitating the session was Andile Dube, the Faculty of Arts and Design’s Information and Communications Officer who began by introducing the Acting Executive Dean in the Faculty of Arts and Design, Professor Brian Pearce and the three guest speakers who are gay activists namely; Hlengiwe Buthelezi, Board Member of the Federation of Gay Games and Executive Director of the KwaZulu-Natal (KZN) Lesbian, Gay, Bisexual and Transgender (LGBT) Recreation, Sharon Cox, Health and Support Services Manager at Triangle Project, Siya Khumalo, Author of a book titled: “You Have To Be Gay To Know God”, and Mr Gay South Africa runner-up.

Dube said that over the last couple of months everybody has been shocked at the increasing numbers of gay people that have been murdered in South Africa, in the most gruesome way. He added that everybody is affected by this crisis despite of being gay or not because everyone knows someone who is a member of the Lesbian, Gay, Bisexual, Transgender, Queer and Intersex (LGBTQI) community.

“Be it a student in your class, a family member, a friend or somebody in your community. We often think hate crimes are caused by people who hate gays meanwhile there are a lot of factors that contribute to hate crime that we don’t even think about,” said Dube.

“The present topic on South Africa’s Hate Crime Crisis is one which is of concern to all South Africans as crime and violence needs to be addressed in our society in all contexts. There has been a recent spate of Homophobic crimes which is the impulse for this Dialogue Series,” said Prof Pearce.

The first speaker, author, Siya Khumalo said he writes and speak, religion, politics and sex. His presentation focused on his understanding on the recent spike in hate crime.

“Growing up I experienced a lot of bullying because I was gay. The bullies knew I was gay before I could even understand what gay meant. I realised that the world I live in was organised by hierarchy where there were popular kids and non-popular kids. I anticipated that growing up I would experience a level of discrimination so I started thinking ahead. I realised that people I could turn to could not do anything and the people who could do anything could not be turned to because they had so much power, they would not use it for helping those who didn’t have that much power. I realised that the democratic systems do not have enough people and that people often choose to support people or systems. It is where we get tribalism, dictatorships and personality cults. I understand where people are coming from because were all raised by people not laws. I also realised that the behaviour that creates popular people or groups also creates scapegoats who are blamed when the popular class undermine the systems that ensure economic existence,” said Khumalo.

He said he sees this when insecure men commit femicide, when frustrated groups turn to Xenophobia, saying foreign nationals are the reason the economy is not working for them. Khumalo believes homophobia is people fixing the system as they understand it. In any oppression hierarchy, Khumalo said there are always people who protest that system, even though it discriminates against other people.

“When something goes wrong they blame the people beneath them in that hierarchy instead of blaming the system. Again we were not raised by ideas, we were raised by people, when something goes wrong we always think that the person we can see is the reason. Homophobia in the last few months with the country on lockdown, with the economy straining, I believe is the result of some people thinking they are not as powerful as they used to be economically, it must because of the gay people who are mixing things up and changing everything have somehow stolen my power away. They turn to gay people as scapegoats, that is why some of these crimes are happening,” said Khumalo.

Sharon Cox, Health and Support Services Manager at Triangle Project, the oldest LGBTI organisation in Africa, said often people ask her why in South Africa, a country that has such a progressive constitution, do you still see the significant numbers of people being raped, murdered, brutally assaulted because of their identity and orientation?

“The truth of the matter is that we are raised by people. In our country 83% of us are raised in one faith or another. Faith significantly impacts on people’s beliefs, ideas, which translates to attitudes and behaviours. For the longest time, these attitudes and beliefs has been played out in very impressive ways. LGBTI, we are very popular targets for that. If we think back it has played out and still plays out against women and not so long ago still continues against black people. Apartheid was held up by the church. It is no surprise then that this is what we are always up against. We see how bad faith impacts people’s attitudes and how that translates. Heterosexuality is seen as the norm, superior or more important. It is easy for people to brutally murder a lesbian or gay just because of their life is less important. I don’t know when this will ever end as it is generational, where parents transfer their attitudes to their children, who then live out what they learn,” said Cox.

Hlengiwe Buthelezi, Board Member of the Federation of Gay Games and Executive Director of KZN LGBT Recreation said South Africa is very much in crisis of social ills, especially hate crime.

“Yes, Durban has been declared as the hot spot because of the high number of cases that has happened. However, if you look in all nine provinces there are hate crimes. If people are not killed, they are brutally assaulted, as we speak some are battling for their lives in hospitals and others recovering from home. In the 27 years of democracy in this country we are still a crying foul of people being killed for their sexuality. LGBQTI are killed just for loving someone. Honestly, we do need a Hate Crime Bureau in place. We are not saying it will totally eradicate hate crimes but it will coerce the law enforcers to act for these perpetrators to be convicted for not just lame murder but specifically for what they killed the person for,” said Buthelezi.

The dialogue was ended with a question and answer session, where Dube closed with expressing his gratitude to the speakers for the fruitful discussion.