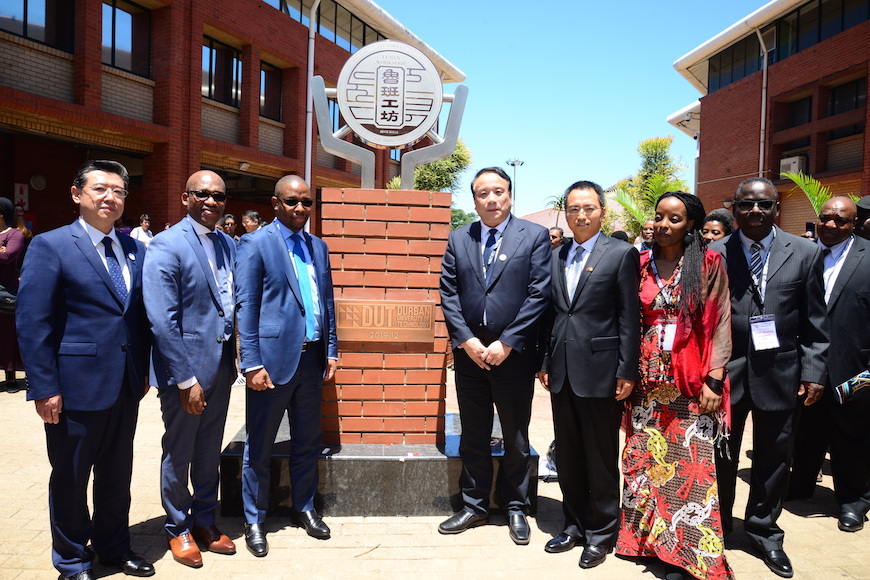 Durban University of Technology (DUT) in collaboration with Tianjin Vocational Institute (TVI) of China launched the first Luban Workshop, in South Africa on Monday, 16 December 2019 at DUT’s Ritson campus. The MEC for KwaZulu-Natal (KZN) Education, Hon Kwazi Mshengu and Hon Bai Hailli, Deputy Director of Tianjin Municipal Education Commission presided over the official opening of the Luban Workshop at DUT. The Vice-Chancellor and Principal of DUT, Professor Thandwa Mthembu hosted a high level delegation that included the Chinese Consul General, Mr Fei Mingxing and the Chinese delegation from China made up of the Deputy Director of Vocational Education, Professor Li Li, and Deputy Director of International Exchange, Professor Junyan Wang, both from Tianjin Municipal Education Commission. The delegation also included the President of Tianjin Vocational Institute (TVI), Professor Liu Bin and his high level team of Professors and Technical team. There were also a number of officials from the KwaZulu-Natal (KZN) Provincial Government and DUT partners, DUT Executive team, staff and students present.

Luban workshops were named after the father of Chinese architecture, Lu Ban, from around the 4th century BC, and were designed by the Tianjin government. The Luban Workshop for Africa was announced by Chinese President Xi Jinping at the September 2018 Beijing Forum on China-Africa Cooperation (FOCAC) Summit. Jinping also promised to launch a people-to-people exchange initiative to establish an institute of African studies to enhance exchanges, and upgrade the China-Africa Joint Research and Exchange Plan.

DUT’s Professor Thandwa Mthembu, Vice-Chancellor and Principal, in collaboration with Professor Liu Bin, president of the Tianjin Vocational Institute set up the workshop at DUT to provide technical and vocational training for young South Africans, to promote modern vocational education reforms and collaborate with vocational schools around the world.

A delegation from DUT was invited to Tianjin to attend the prestigious Luban Workshop at Tianjin Vocational Institute (TVI) in China from the 6 to 12 May 2019 followed by the confirmation that there would be a Luban Workshop jointly established by both DUT and the TVI with equal technical equipment designed for teaching and training purpose in areas of common selected specialties, starting with 3D Printing and NB IOT (Narrow Band: Internet of Things). A high level delegation from TVI then arrived in South Africa soon after for a site visit and discussions around the two specialties were held culminating into the signing of an MOU between DUT and TVI to commence with the project.

In September 2019, a delegation from DUT was invited by TVI to China to discuss the implementation plan. It was agreed that two new 3D Printing and NB IOT labs will be setup at DUT and that DUT will renovate the labs with TVI donating the equipment. Additionally, it was agreed to send the first cohort of eight DUT staff for four weeks training at TVI in China. Subsequently, courseware and syllabi will be jointly developed by DUT and TVI and DUT will offer courses around the two specialties.

At the opening ceremony at DUT on the 16 December 2019, a memorandum of understanding was signed by both parties and a Luban Workshop monument representing the collaboration between DUT and TVI was unveiled. A friendship tree representing the relationship between China and South Africa was planted by Prof Thandwa Mthembu and Prof Liu Bin. The two specialty laboratories, 3D Printing and NB IOT were also officially opened.

“Education and skills development will be prioritised whilst working towards achieving universal access to education, improving on the quality of primary education as well as enhancing the effort of strengthening education and vocational training, said Mshengu.

He further congratulated the Tianjin Vocational Institute and the Tianjin Municipality of China for designing this model and for beginning to share it with other countries. “I am impressed by the launch of this workshop because I know it will help to improve vocational education,” he said.

Expressing his delight on the establishment of the Luban Workshop was Professor Thandwa Mthembu, added that the Luban Workshop was a great way to enhance and promote skills training amongst students and youth in the KwaZulu-Natal region. “The issue of skills in this country is a very serious one. Economic growth as you will all understand is not possible without the key people, but people who have derived the kind of skills that feature in the 21st century. The Luban Workshop is one such facility that will ensure that we chip away at the challenge of the deficit of skills that we have in this country and that fit with what is expected within the 21st century,” he stressed.

Giving more overview on the culmination of the Luban Workshop was Professor Liu Bin, said the establishment of the Luban Workshop at the Durban University of Technology (DUT) comes with the strong support from the Tianjin Municipal Government and the Tianjin Municipal Education Commission, and was also encouraged and supported by the Consulate General of China in Durban. “The Luban workshop in South Africa is where DUT and the Tianjin Vocational Institute’s commitment, devotion and effort was met and the technical advantage of Huawei demonstrated. The successful unveiling is the fruit of the exchanges and co-operation between DUT and TVI; it is the bond of friendship and sharing; and it is the cradle for the two DUT and TVI to develop technical skills for the future,” he said.

The Chinese Ambassador Mr Fei Mingxing added that the Luban Workshop is a joint venture of friendship of a shared future between China and South Africa.

Professor Sibusiso Moyo explained that the Luban Workshop gives students an advantage by being exposed to new technology, allowing students to be creators of products and innovations so that students are not just end users but also producers of technology.

She said that it helps students and communities to have access. “It is important that we give exposure to a larger community so that they can get the hands on skills. It has a ripple effect on socio-economic development, job creation and entrepreneurship. We have a combination of quality education and practical aspects especially for 4IR. China is very advanced – they are talking about 5G at the moment. For us it is key in making sure students and staff are at the cutting edge of technology,” said Professor Moyo. She also recognised the contribution of the teams behind the success of the Project that included the Leadership and Vision of the Vice-Chancellor and Principal, Professor TZ Mthembu, the Executive Dean Accounting & Informatics, Prof OO Olugbara and the then Acting Dean (Engineering & the Built Environment), Professor Musonge and current Executive Dean, Professor B Twala, the Chief Information Officer, Dr Progress Mtshali, Mr Ebrahim Ismail and his team from IT, the first cohort of staff who received training from IT and Engineering, Ms Nons Khanyile, from the Entrepreneurial Desk and all our staff and students who will ensure we take care of the new infrastructure and make good use of it,” she said.

“We believe that is the beginning of a long and prosperous relationship between DUT and TVI as a number of new innovative projects will be announced in 2020,” said Mr Ebrahim Asmal, Project Leader.