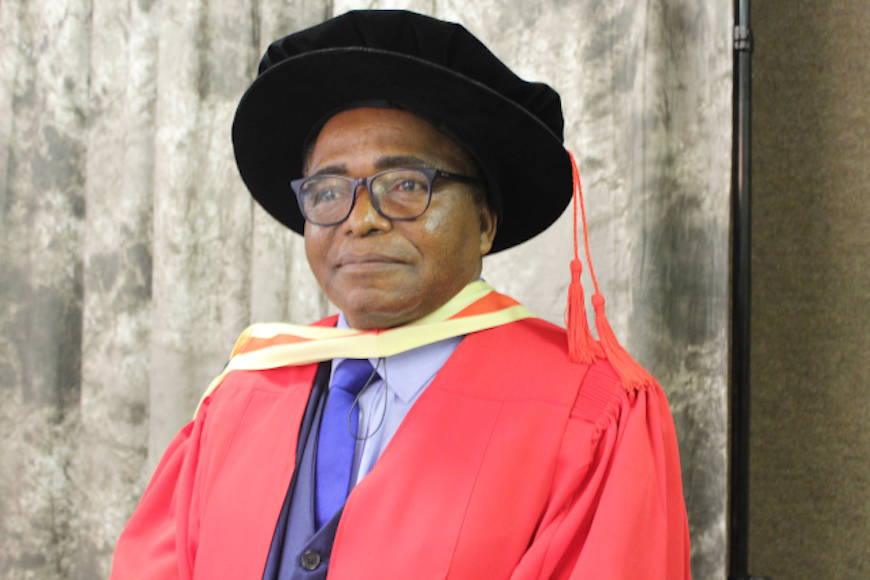 The Durban University of Technology (DUT) extends its most sincere condolences to the family, friends and colleagues of the late radio and television legend, Dr Welcome Nzimande (famously known by his radio name-Bhodloza). The renowned Dr Nzimande was also a proud DUT Alumnus. He was conferred with an honorary Doctor of Philosophy Degree in Visual and Performing Arts by DUT’s Faculty of Arts and Design in September 2018.

Dr Nzimande was honoured for his contribution to the arts and creative industries in South Africa. He was a former announcer, translator, producer, station manager, facilitator and cultural icon synonymous with Ezodumo and Ukhozi FM. ‘Bhodloza’ was a household name and a legend, loved by many for his humbleness and hard work. Dr Nzimande was recognised nationally for promoting traditional music and maskandi artists.

DUTs Interim Executive Dean for the Faculty of Arts, Professor Brian Pearce said: “We are very saddened to hear of the passing of Dr Welcome Nzimande. In 2018 he was awarded an Honorary Doctorate in Visual and Performing Arts in the Faculty of Arts and Design. He was highly respected among colleagues in our Faculty and it was an honour for us to be associated with him. We send our sincere condolences to his family, friends and colleagues. May his soul rest in peace. This is a sad day for all.”

Paying tribute to Dr Nzimande, the Senior Director of Corporate Affairs at DUT, Alan Khan said: “DUT is extremely sad to hear of Dr Nzimande’s passing. He was a national treasure and Dr Nzimande made a significant contribution to our country. We were very proud to award him with an honorary Doctorate three years ago. The university conveys its most sincere condolences to Dr Nzimande’s family and friends. May his soul rest in eternal peace.”

When he received his honorary Doctorate the vibrant Dr Nzimande urged the DUT students and graduates to become leaders with purposeful convictions, and never seek popularity and rewards. He said this recognition has revitalized and spurred him to pursue more purposeful ventures to make South Africa a better place.

The Richmond-born veteran broadcaster reminisced about his childhood memories, which he believed also shaped him to be the person that he was.

Dr Nzimande’s leadership experience intensified during his high school days at Kwa-Dlangezwa High School in Empangeni where he was the head-boy and received awards for leadership and Boy of the Year during the Speech and Prize-giving Day. He would hold meeting to discuss leadership issues of the school, with Professor Sibusiso Bhengu who was his school principal, whom in later years became the first Minister of Education in President Nelson Mandela’s Cabinet.

Through his contribution, “Bhodloza” as Dr Nzimande was popularly known, became synonymous with Maskandi music. He was eager to learn and grow maskandi music, a genre that was not popular to listeners and often ridiculed by his colleagues. Nonetheless, he took on the challenge of popularising maskandi music through innovation. He introduced maskandi competitions, which brought public attention to the genre, and thoroughly engaged listeners and artists.

May his soul rest in peace. DUT’s thoughts and prayers are with the family and friends of Dr Nzimande.