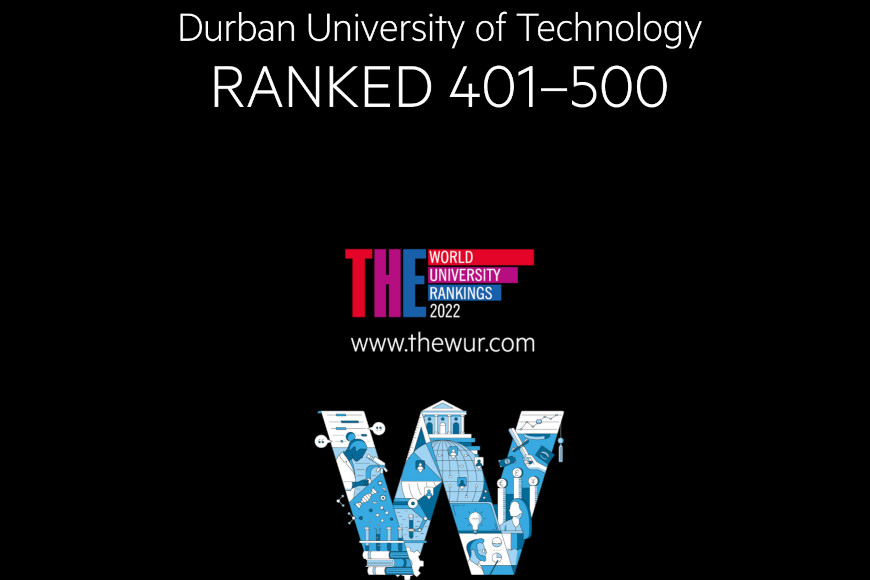 The Durban University of Technology (DUT) has retained its Top 500 global rating in the Times Higher Education (THE) World University Rankings 2022 which were announced in London earlier this morning.

DUT was also named in the Top 5 of all South African universities for the second consecutive year. In the Citation category, DUT was ranked first in South Africa and 12th in the world. The rankings were announced by Mr Phil Baty, Chief Knowledge Officer of Times Higher Education in London.

The Vice-Chancellor and Principal, Professor Thandwa Zizwe Mthembu, was ecstatic with this outcome as DUT navigates this competitive terrain. He expects the University to reinforce excellence especially around its recruitment of excellent Scholars who will help contribute to the core business of the University.

DVC Research, Innovation and Engagement, Professor Moyo, indicated that the University was still performing above its weight and that the Times Higher Education World University Rankings 2022 will help ensure that DUT becomes more visible nationally, on the African continent and in the world. It will help to strengthen the University’s research and innovation agenda.

The Times Higher Education World University Rankings is trusted worldwide by students, teachers, governments and industry experts and the annual list is highly respected and credible. The ratings are calculated by the standardised performance indicators that measure an institution’s performance across five areas: teaching, research, knowledge transfer, citations and international outlook.

DUT is extremely proud of its performance in the Times Higher Education World University Rankings 2022 and remains committed towards providing a world class teaching and learning experience, offering quality academic programmes and undertaking relevant and valuable research, investing in innovation and building an entrepreneurial university that is creative, distinctive and impactful. This recent global accolade is a huge achievement for DUT since it speaks to the University’s ENVISION2030 strategy, of improving lives and livelihoods. Innovative curricula and research is also one of the enabling strategic objectives of ENVISION2030. A special thank you to the DUT Council, DUT Management, Staff, Students, Alumni and all of our Quad-Helix Partners for their valuable contribution towards this success!