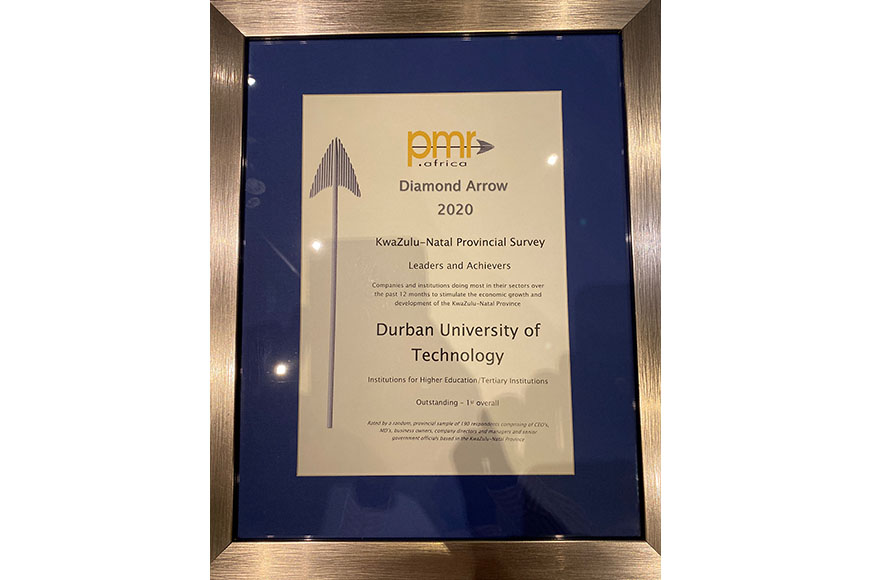 Excellence is one of the many contributions to the success of the Durban University of Technology’s (DUT’s) DNA strands. This was evident when the university was awarded the Diamond Arrow Award for Leaders and Outstanding-First Overall Achievers in KwaZulu-Natal, at the Professional Market Research (PMR Africa) Awards 2020.

The award was bestowed in the category of the institution of Higher Education/Tertiary, on Wednesday, 28 October 2020, at the Elangeni Maharani Hotel, Durban.

In 2019, the university received gold in the same category, however, in 2020, CEO’s, MD’s, business owners, company directors, managers and senior government officials in the province rated DUT as the Diamond Arrow Award recipient in stimulating the economic growth and development of the province. The survey which was conducted in April 2020, is a reflection of the university’s status over the past 12 months. The PMR Africa Awards are held annually and acknowledges contributions and initiatives, strategies, efforts and hard work done by companies in their sector. PMR Africa looks at the company’s vision, integrity, values, competence and ‘empathy’ that contributes to ethical and sustainable business practices.

Acknowledging this achievement, DUT’s Senior Director of Corporate Affairs: Alan Khan said that DUT was honoured to receive the prestigious 2020 Diamond Arrow Award from PMR Africa. “We are excited to be acknowledged in the category of Leaders and Achievers and being first overall for Institutions for Higher Education,” said Khan.

Furthermore, Khan highlighted that the award followed the recent Times Higher Education World University Rankings that placed DUT in the top five of all South African Universities. “We are extremely grateful to PMR Africa for acknowledging DUT’s role to stimulate economic growth and development in KwaZulu-Natal. Our DNA at DUT is people-centred and engaged, innovative and entrepreneurial, which are vital ingredients of our ENVISION 2030 strategy,” he said.

PMR Africa conducts its research telephonically and it is not pre-coded, meaning that it is up to the respondents to nominate and rate the candidates in the various categories on certain criteria. The whole research and survey process is independently funded by PMR Africa so that the integrity and independence of the research is reserved. Surveys are done annually and this year was the 18th year.

In his closing remarks, PMR Africa Chief Executive Officer (CEO): Johan Hattingh congratulated all the winners and further encouraged them to continue striving for excellence while identifying potential, excellence of all personnel and members of staff for their commitment, dedication and hard work for contributing to the achievements of the company or institution.

Pictured: DUT is bestowed the Diamond Arrow Award for Leaders and Outstanding-First Overall Achievers in KwaZulu-Natal.