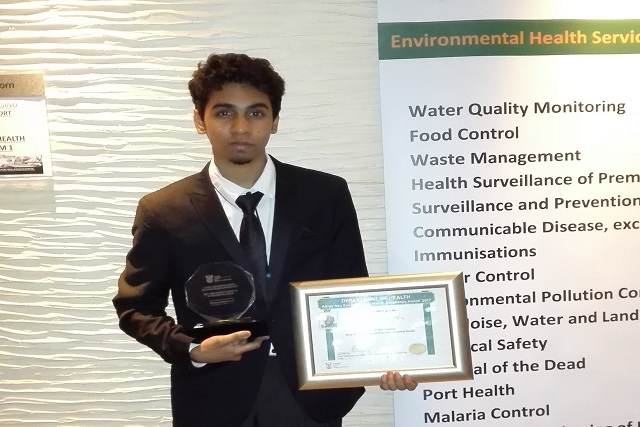 The third-year Environmental Health student from the Durban University of Technology (DUT) is flying the ‘green’ flag high for DUT in recognition for his contribution to ensure a clean and safe environment.

“I’m delighted to know that the field of Environmental Health is becoming increasingly recognized in South Africa and these kinds of awards will motivate and prompt students to achieve excellence in this vital field of study,” said the jubilant Nicholas Pillay, upon winning best performing student in Environmental Health in South Africa, recently.

The awards are in honour of the late Alfred Nzo, a health inspector whose experiences of poor living conditions of people in the Alexandra township, forged much of the understanding of the lives of millions of South Africans in the 1950s.

Pillay came to know about the awards after an invitation was presented to the class by DUT’s Joy Kistnasamy, HoD: Community Health Sciences, who encouraged the students to enter. He was enthusiastic about the opportunity at the onset and decided to apply.  “I would like to thank the HoD, Joy Kistnasamy, for her motivation and support and making this opportunity available for me to apply for this incredible award. There were many entrants throughout the country, three students were shortlisted to attend the awards function. The competition was of a high standard as it required a very detailed compilation of my academic achievements together with evidence and it was necessary that results had to be consistently exceptional. The entrant also had to show evidence of strong leadership and vast experience in the various aspects of the field, which I had achieved” he said.

For Pillay, this was not his first time at winning for his consistent, academic hard work. He has always excelled academically from high school through to University. In his second year at DUT, he received an award for best academic performance in the course.
The passionate and driven academic hopes to secure a career in this remarkable field after he completes his Btech in 2018.

He also thanked DUT’s Kistnasamy for her motivation and support and allowing him to apply for such an incredible award which he hopes that future students will apply for in the years to come, thus bringing further honour to DUT.

His advice to other students who want to study such a course is to research it further and figure out whether they have the passion for such a field of work. “If you feel you can make a difference, then this field is for you. You need to be a hands-on person, who is able to exert authority as well as be willing to engage in lots of field work,” he added.

When asked about what his future plans are, he said that after completion of his diploma at the end of this year, he plans to do his Btech in Environmental Health in 2018. “When I do graduate with my Btech, I want to pursue a career in the field of occupational health and safety and eventually work my way up in the industry and look at furthering my studies with my Master’s degree, he said.