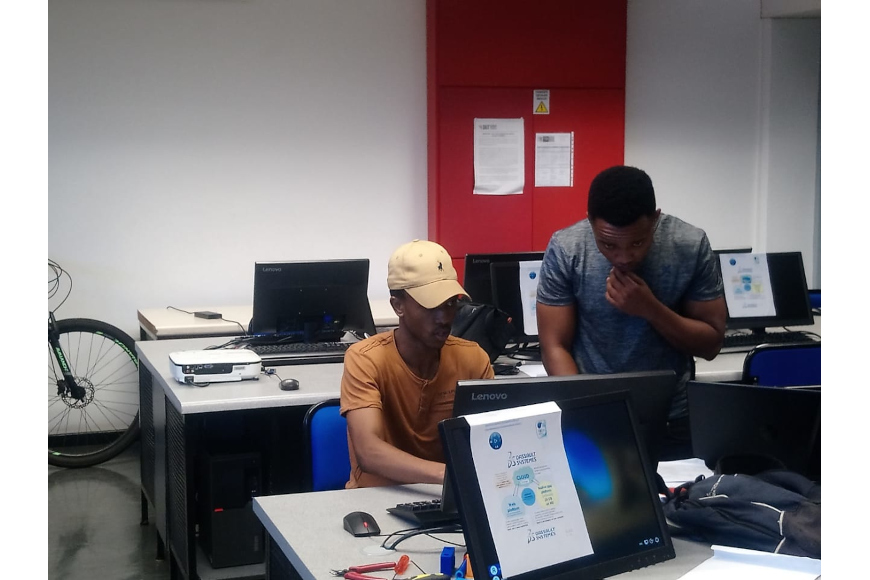 The Durban University of Technology (DUT) and Tianjin Vocational Institute (TVI) team recently won a gold medal at the World Vocational Skills Competition which was held over two days in China (on-site) and online. The gold medal was in recognition of their outstanding performance in designing a manual cooling fan.

The joint DUT-TVI team consisted of two students from Tianjin Vocational Institute (TVI) in China namely, Zhou Yating and Zhouya Ting, with their mentor, Liu Braden and two fourth year Mechanical Engineering students from DUT, Njabulo Moditambi and Nsindiso Mzimela, with their mentor, Dr Malesela Moutlana, a Mechanical Engineering lecturer at DUT. They were among the 12 groups from the various countries including China, who participated in the prestigious event. DUT is extremely proud of the team for winning the gold medal since it was the first time that DUT was participating in the World Vocational Skills Competition.

According to Dr Moutlana, the DUT team’s collaboration was part of an ongoing partnership between TVI and DUT, relating to sharing engineering knowledge.

“The main purpose was to work together to design a Manual Cooling Fan that you can use with one hand. The test for optimal function was to blow out an alcohol lamp at a distance of 10cm. For this to happen a 3D printer had to be built from scratch by the TVI students, followed by 3D printing of the  Fan CAD model using the assembled printer. The structure of the fan blades of the manual cooling fan had to be designed as well as the gears and power source of the fan,” explained Dr Moutlana.

Speaking about the formation of the winning team, Dr Moutlana said the students were chosen for their proficiency in Computer Aided Design (CAD) Skills and knowledge of prototyping and manufacturing. In addition, he indicated that the TVI team were responsible for building or assembling a high precision 3D printer with components that were given onsite and then use the same high precision 3D printer to print computer aided design models for both the DUT –TVI team.

“Teams needed to submit engineering design documents and PowerPoint presentations file recording the working process to a designated email address of the competition on additive manufacturing as an assessment basis for the online part. The Schematic Design used consists of a mechanism operated through a motion of the thumb. A reciprocating mechanism is utilized to convert linear motion into circular motion to assist in the rotation of the fan blades. Epicyclic and compound gearing is incorporated into the design, and all these concepts combined bring out a rotating motion from the force of your thumb in order to optimize the air flow. We used the Dassault Systems 3D Experience as a 3D Design software support platform,” explained Dr Moutlana, sharing the concept of their winning design.

A team member from DUT, Njabulo Moditambi (21) from Soweto said winning this competition has boosted their confidence seeing that they can take an idea from conception all the way to a prototype.

“It demonstrates that with hard work and confidence we as students can work or function at a world stage. It also means that the team has competitive edge and also indicated that we are not the only students who are interested in solving world problems. The highlight of the competition was the difficulty of finding the right idea and eventually getting through with it in time,” added Moditambi.

The other team member from DUT, Nsindiso Mzimela (23) from Tongaat advised other students who want to be part of the DUT-TVI team to have the right knowledge, the right mindset as well as the passion to keep progressing the collaborative relationship.

“A person should be able to enjoy the moments of learning from one another because in the end you can’t do everything or learn everything on your own; you have to allow yourself to be taught so that you understand and can also apply the same knowledge in a different context or situation,” noted Mzimela.

Honorary Dean for the School of Innovation and Entrepreneurship, Tianjin Vocational Institute, China (202 1-2023), Professor Sibusiso Moyo said: “We congratulate Dr Moutlana and the DUT student team in taking part in the

International Competition. This is an illustration of how our relation as DUT and TVI is becoming stronger and we hope to take 1st position in the next competition. Thank you to the TVI Leadership for their support and reaching out to DUT as well.”

Congratulating the students, Dr Laurent MARCHE, Manager and Technical Expert of the Franco South-African Academic Centre also called the Product Lifecycle Management Competency Centre (PLMCC) at DUT, said that this contest was a good subject to set up the pedagogy on: “follow a process to prototype a project” and it was good to see students be able to conceive, design, and simulate the project using the 3Dexperience platform.

“The PLMCC can provide support for 3D-printing of the different parts, assemble and test the prototype. If engineering connexions need adjustment, they can easily loop to the 3D drawing and modify dimensions. It`s a good way for students to apply their new skills learned during training, well done to the two students! We are grateful to MENJ – French Ministry of National Education and Youth for supporting the PLMCC at DUT,” he said.