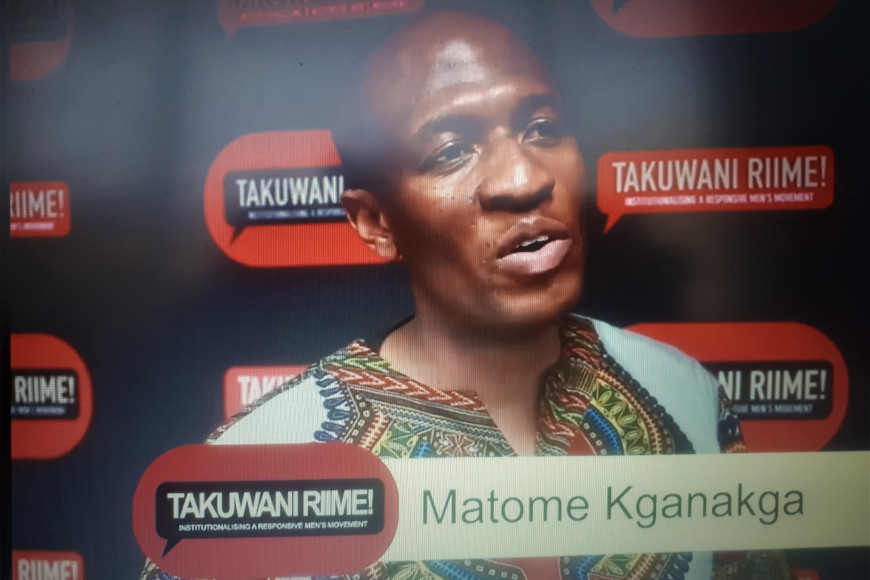 The Umtapo Centre and Durban University of Technology (DUT) hosted a webinar which addressed topics pertaining to Inequality, Patriarchy, and Intersectionality on Friday, 28 August 2020.

The Umtapo Centre is a social justice organisation whose mission is to engage in education, training, community mobilisation, and networking in order to empower people, particularly youth, to take control of their own lives in the struggle for sustainable development, peace, and human rights. With the context of the webinar looking at patriarchal societies, race, class, and gender, speakers Carolina Enriquez and Dr Matome Kganakga were invited to analyse the themes and give more insight into the struggle to eradicate all forms of oppression as well as the role men play in today’s society. Arun Naicker and Pumzile Yika from the Umtapo Centre facilitated the proceedings.

Professor Sibusiso Moyo, the Deputy Vice Chancellor for Research, Innovation and Engagement at DUT, welcomed all attendees and guest speakers, Enriquez and Dr Kganakga. She stressed that while the country and the world fight COVID-19, the highly visible epidemic of gender-based violence (GBV) continues to ravage the lives of women and children each day. Prof Moyo expressed that despite President Cyril Ramaphosa declaring Femicide a national crisis in September 2019, there was never a day when the media took a break from reporting on serial killers who have robbed women of dignity and respect to be human.

Looking further at deconstructing ideas that reinforce sexism, racism, exclusion in all the aspects of individuals and collective lives, was Enriquez, a freedom fighter who was involved in the struggle in Guatemala, Central America, during the armed conflict. She also has a background as an educator of human rights with social organisations, movements and in the development sector in several countries in Latin America. She currently works for Oxfam (America).

She (Enriquez) delved into the struggle to eradicate all forms of oppression including the broader ideology of patriarchal domination in order to create a world where everyone can live fully and freely. “Addressing oppression and patriarchal domination are from three converging aspects which are the multi-dimensional and historical face of exclusion, the power of building gender, ethnic and class identity from a collective and community perspective and the importance of enabling access to power. What we are, where we are, is a result of historical events marked by oppression, struggles and victories. Identifying root causes of oppression facilitates a comprehensive interpretation and enables building strategy in the long term. As exclusion and oppression have many faces, so must our approach,” she said.

She further added that ideological battles are more than ever important in this era. “An illustration of today’s crisis due to COVID-19, a comprehensive analysis is necessary in the current pandemic as it has unveiled these inequities and exclusion against the poor, women, indigenous people. Lack of access to health, education, security and employment are examples of the multi-dimensions of oppression and exclusion, and where women suffer the worst part: unpaid care work for example,” she said.

She also focused on broader global examples, that there are good images of strategic struggles to achieve changes led by women and indigenous peoples like in Latin America, Bolivia and Mexico, to name a few. She further highlighted that eradicating oppression is an on-going battle that has to do with knowing that challenges are part of a larger struggle.

The second speaker was Dr Kganakga, co-founder and Executive Director of Azali Health Care, a non-profit organisation that supports healthcare transformation on efforts, working with the public health systems, non-governmental organisations and private health partners. He is also the co-chairperson of the SANAC Programme Review Committee, Men’s Sector deputy-chairperson and head of secretariat of the “Takuwani Riime” Men’s Movement.

He spoke on the movement’s aims such as to promote the Men’s Health campaigns and 365 days of Activism Programme of Action and to support awards of men who are renowned social developers and investors. He also spoke on the role of men in challenging patriarchy and gender-based violence. “Violence is systematic, there are no isolated incidents, the attitudes and actions on the bottom reinforce and excuse those higher up,” he said.

He added that the deterrents of crimes such as rape, molestation, verbal abuse needs to be detection, arraignment and prosecution. He concluded by saying that public participation, accountability and the rule of law approach is necessary. Dr Kganakga said the struggle to eradicate all forms of oppression including the broader ideology of patriarchal domination is vital in order to create a world where everyone can live fully and freely.

Pictured: One of the key speakers at the webinar, Dr Matome Kganakga.