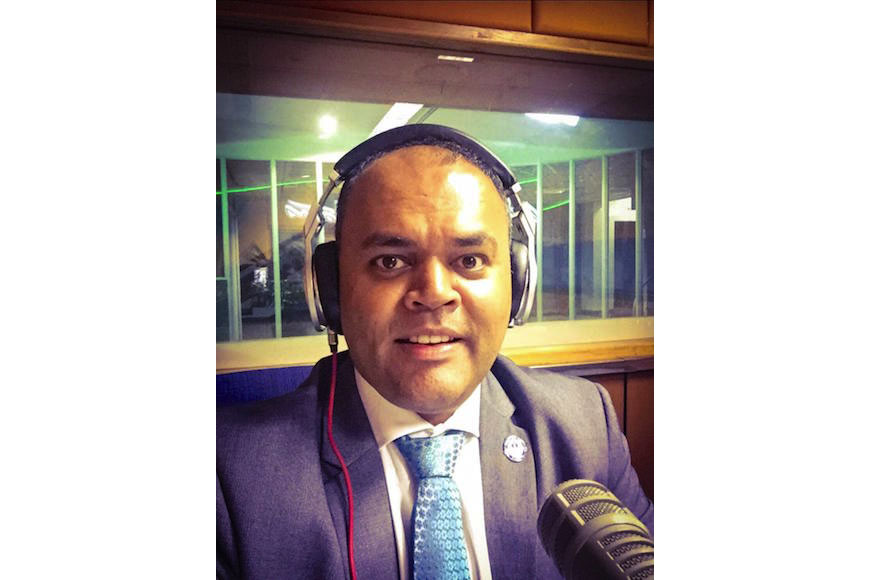 Alan Khan, charismatic and esteemed media and radio personality, will be hanging up his microphones after marking 30 years in the broadcast industry.

Khan, who is the Durban University of Technology’s (DUT) Senior Director of Corporate Affairs, will retire from his 30 year run on radio by the end of March 2020, to enjoy some much-deserved, quality family time. “My role at DUT keeps me occupied. But I’m excited about having my evenings back, to spend time with family and friends,” he said happily.

Speaking more about his family life, Khan said his wife Dr Mariam Seedat, a Senior Lecturer in Sociology at UKZN, and his university-going sons, Nasser and Ameer had made major sacrifices for him over the years. Apart from relocating to Gauteng and then returning to KwaZulu-Natal in 2011, they had allowed him to miss important family functions and many school events over the last seven years. However, following his wife’s health scare last May 2019, it motivated him to reassess things and to focus more on his family.

For Khan, he is a big believer in destiny. He enrolled to study Chiropractic at Technikon Natal, now the Durban University of Technology (DUT), in 1990. “A few days into my course, I joined the campus radio station. I met two fellow students, David Yapp and Mark Burgess, outside the old Loft building next to the Sports Centre. They were carrying some heavy speakers and I offered to help. They said yes and the rest is history,” he said.

Khan joined TNT Campus Radio and then, moved on to Capital Radio 604 to commence with his career when he graduated. He stressed that he is extremely thankful for the many opportunities in his career.

“For the last seven years, DUT has been kind and gracious enough to share me with Lotus FM and the SABC. After my day in the office, I change caps and went to host Walk the Talk with Alan Khan on Lotus FM. I have always loved radio and being on air. However, last year, my wife Dr Mariam Seedat was diagnosed with breast cancer. Thankfully, she has responded very well to treatment and has made excellent progress. I decided that I need to dedicate my evenings to my family so from now on, when I leave my office at DUT, I will go home and enjoy quality family time,” he said.

Khan thanked his DUT family for giving him the opportunity to present his show on Lotus FM. “DUT has approved my annual requests for after-hours work at the SABC and I will always be grateful for their understanding and support. I also want to thank my family and friends for always keeping me motivated and importantly, to the guests who featured on my show, who invested their time and expertise to inform, inspire and entertain the audience,” he said.

Khan has won many accolades during his radio career, the highlight for him being inducted into the South African Radio Hall of Fame in April 2015.

“It means that my name will always be associated to the South African broadcasting industry. Hopefully, my great grandchildren will one day, be proud of the small role that I had played in the world of radio,” he said excitedly.

For Khan, his connection to his radio fans is something he holds very dearly to his heart. He added that he is immensely grateful for the support and encouragement he received from them over the years. “When I started in 1990, I had no idea that I would still be on radio 30 years later. So I am thankful for the opportunity. All good things come to an end and I feel as though the timing is right for me to hang up my headphones. I’m fortunate to be leaving radio on my terms, with the show increasing audience. So, I am giving the next presenter a wonderful platform to build on,” he said.

Besides Khan’s love for his amazing fans, he has had the privilege to meet and interview some of the world’s most amazing personalities and celebrities. “Interviewing President Nelson Mandela, Archbishop Desmond Tutu, His Holiness the Dalai Lama and the likes of Sir Alex Ferguson, Stevie Wonder and Janet Jackson were stand-out moments. However, my favourite was at 11:10 on 10 September 1996, when I interviewed the Director of the Durban Street Children’s Forum. It was love at first sight and I would go on to marry Mariam 178 days later,” he professed.

Khan also spoke more on how the 4th Industrial revolution impacted the radio industry, adding that in his opinion, radio is the original social media. “It has been connecting people way before Myspace, Facebook, Instagram and TikTok. And radio has been resilient, it survived the initial digital revolution and it has embraced the modern multimedia world. In saying that, the millennials are not traditional media consumers and radio will have to evolve, with the changing audience. It’s not about the music, it’s the content that matters. Being relevant, be responsible and being real,” he said.

The dynamic radio personality has some sound advice for future radio journalists who wished to follow in his footsteps. “It’s important that you always protect your reputation and maintain your credibility. Fact check and do not only rely on social media posts for source material. And where possible, go to stories and report on first-hand information,” he stressed.

Khan also thanked his journalism teachers and radio colleagues, who inspired and taught him so much through his radio journey. “I want to express my sincere appreciation to everyone who listened in to my shows, provided feedback, tuned in, logged on and joined me on this radio romance,” he said.