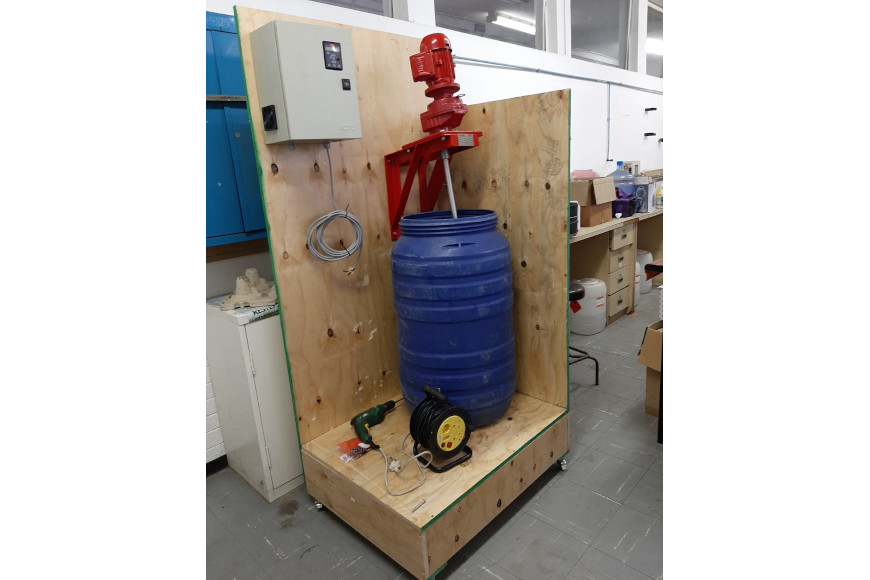 The Department of Chemistry at the Durban University of Technology (DUT) has recently started manufacturing its own hand sanitisers at the laboratory in the Abdul Hameed building at ML Sultan Campus.

According to the Chemistry Department’s Professor Phumlane Mdluli, this project was initiated by their postgraduate student, Ntokozo Mabaso after he heard that the Department of Biotechnology at DUT had stopped the production of sanitisers. This project is part of DUT’s ongoing initiatives to curb the spread of COVID-19 at the University.

“The postgraduate student said that from the beginning of the pandemic, there was interest of the production of the sanitiser, especially when the university was going through a shortage of supply. We had a discussion about the sanitiser formulation which spiked the discussion of building a mini production reactor with a production capacity of 200 litres. An agreement was reached with DUT COVID-19 Task Team to first produce 200L of sanitiser using this reactor,” said Prof Mdluli.

He further explained they used trusted formulations recognised by the World Health Organisation (WHO), using the regulated 70 to 75% ethanol. Describing the sanitiser, Prof Mdluli said it has a lemon scent and it is colourless, and the added quantities are regulated by WHO guidelines.

“It is efficient and very effective, consisting of 70 to 75% ethanol.  We have an alcoholmeter which has assisted us to speedily quantify the alcohol content without using expensive techniques such as gas chromatography. More than 200 litres have been produced so far. The sizes of the sprays are 500ml and 100ml spray bottles and 2,5l bottles,” added Prof Mdluli.

Prior to the team contacting the DUT COVID-19 Task Team, Prof Mdluli said sanitisers were being distributed by the student, Mabaso under the trading name of FDA Hand Sanitiser and was bottled and sold to the public in smaller quantities for six months. However, Prof Mdluli made it clear that the one being produced in the labs at ML Sultan is for internal use only since it is being made specific on the request of the DUT COVID-19 Task Team. He said the current plan is to distribute the sanitiser to all the campuses around DUT, then hopefully around all the universities, TVET colleges, as well the public and private sector as time goes on.

Prof Mdluli has applauded Mabaso for initiating this project saying that this sanitiser has encouraged the open-minded nature of becoming an entrepreneur with the skills that have been developed through learning as a student.  He said it has not put a hindrance on other products being produced since the sanitiser can be used as the benchmark for all other products being produced such as the cleaning detergents like dish washing liquid, hand washing soaps, bleach etc.

Pictured: The mini production reactor where the sanitiser is produced.