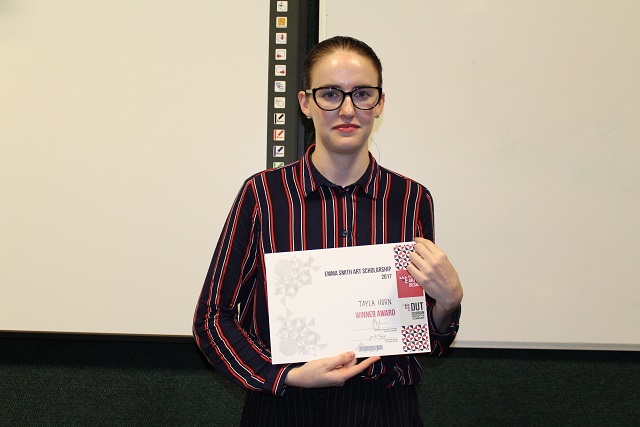 Durban University of Technology’s (DUT’s) Fashion and Textiles student Tayla Horn was named the Emma Smith Scholarship winner at an award ceremony held at the DUT City Campus, this week.

She added that the nominees were selected based on existing student work produced during 2017, which included the third year and BTech level.

The Emma Smith Scholarship Award was introduced in 1920 by KwaZulu-Natal Sugar Industry magnate Sir Charles Smith. Named after his mother, Smith’s endowment was made in appreciation of the work of visionary Art School Head, John Adams.

While the original intention of the scholarship was to allow winners to go overseas to study, the award has been extended to include a variety of purposes or projects proposed by the candidates. These include community-based workshops, further study in South Africa or the African continent and or solo exhibitions. The competition is open to students from the full range of design, visual and performing arts programmes offered at the institution. Members of the judging panel are drawn from leading practitioners in the various disciplines; nominated by heads of department.

“I am very overwhelmed and excited, especially since I was nominated in 2010. So, this is quite an honour to realise that all my hard work and dedication to my craft has finally paid off,” she said excitedly.

Horn is also ecstatic to be able to make use of her prize money towards her tuition fees at the prestigious Central Saint Martins, which is a world-famous Arts and Design College, in London.

Fashion and Textiles’ Leandi Mulder won the 2016 competition for her collection made entirely of secondhand fabrics.
The exhibition of all nominees and the winner is on view until 15 May 2018 at the DUT City campus.