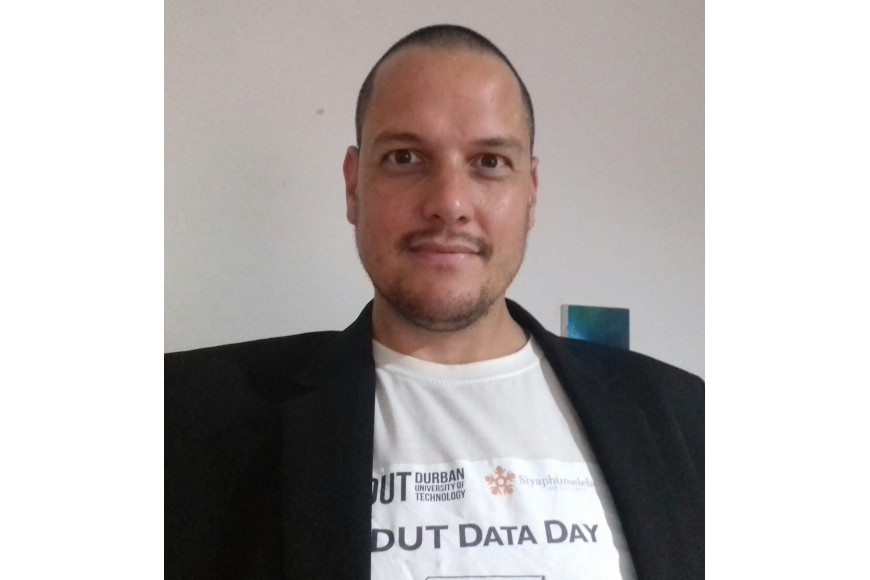 One of the Durban University of Technology’s (DUT’s) DNA threads is to have a people-centred and an engaged DUT community, and living up to that concept is Ashton Maherry, Siyaphumelela Data and Training Officer: Planning.

He was recently appointed to the Executive Committee of the Southern African Association for Institutional Research (SAAIR) for the period of December 2020 to November 2022.

“I was nominated to stand for election as an executive committee member and during the virtual SAAIR conference in November 2020 I was successfully voted into office during the Annual General Meeting,” he said.

He further said it is vital for staff to be part of such organisations, especially regarding research, as DUT has had strong representation within SAAIR committee, especially with Nicky Muller (Director of Institutional Planning) and Rajen Naicker (Direct of Management Information) who have served previously.

“In addition, DUT has been very active in hosting events such as the SAAIR 2018 conference, and so I am proud to take up the mantle as the next generation to represent DUT in SAAIR. Volunteerism is extremely important value for staff and students and the professional bodies/organisations rely on volunteerism of committee members to operate and provide the services to their members,” he said.

Maherry relayed that it is important that staff step up to the plate and take on committee positions within their professional bodies to ensure that they continue to operate, and it is also vital that after one has served one’s term that one steps aside to allow the next generation of members to take up the mantle.

“The goal of every committee member should be to leave the organisation in a better state than what it was when they began their term, and to have rejuvenated the energy so that other members are willing to nominate themselves to serve their own term at the helm,” said Maherry.

Explaining more on his new role, Maherry added that the Institutional Research simply stated is applied research about an institution, for that institution.

“Although Institutional Researchers are fairly new in DUT, we have made huge impact with our DUT Data Days, our data analytics capacity building and the work done through the Siyaphumelela project to promote data-driven or evidence-based decision making with the ultimate aim of ensuring Student Success. Although most institutional research is unpublishable because of the sensitive information of our students and institutions, we are able to share our best practices with other practitioners in other higher education institutions,” he conveyed.

Maherry further stressed that the role as a committee member will provide further opportunity to showcase the work that DUT is doing in institutional research, as well as the culture change that they have had at DUT as they continue to build a culture of data-driven and evidence-driven decision making.

“We can also share our best practices with regardless to the implementation of the powerHEDA data warehouse and the successful staff training on powerHEDA, as well as the implementation and staff training of AutoScholar, DUT’s student tracking software. In addition, the role will allow me to build trust and closer relationships with other practitioners in other Higher Education Institutions allowing them to share their best practices and lessons learned with me, so that DUT can benefit,” he indicated.

Going forward, Maherry spoke more on what he aims to achieve further in his new role at SAAIR.

“Nobody in their childhood says that when they grow up they want to be an Institutional Researcher, and nobody studies to be an Institutional Researcher. We are a group of professionals from diverse backgrounds and skillsets that find ourselves performing research about our institutions and for our institutions. We work in applied research and respond to the needs of our institutions. We sacrifice our personal publishing record because our data is extremely sensitive data and our focus on impact is within our institution. We work at the boundaries and across the boundaries of faculties, administrators, support staff, academic staff and management,” he said.

Maherry also relayed that where there is a silo within the institution, there is usually an institutional researcher driving a bulldozer trying to knock it down, and our demolition vehicle of choice is data.

“We use data to cross boundaries and create a shared understanding so can co-create our future, which for DUT is ENVISION2030. My goal is to further promote the great work we are doing at DUT in this field, as well as to better capacitate young professionals who find themselves in this field so that they too can be successful in their professions,” he said.