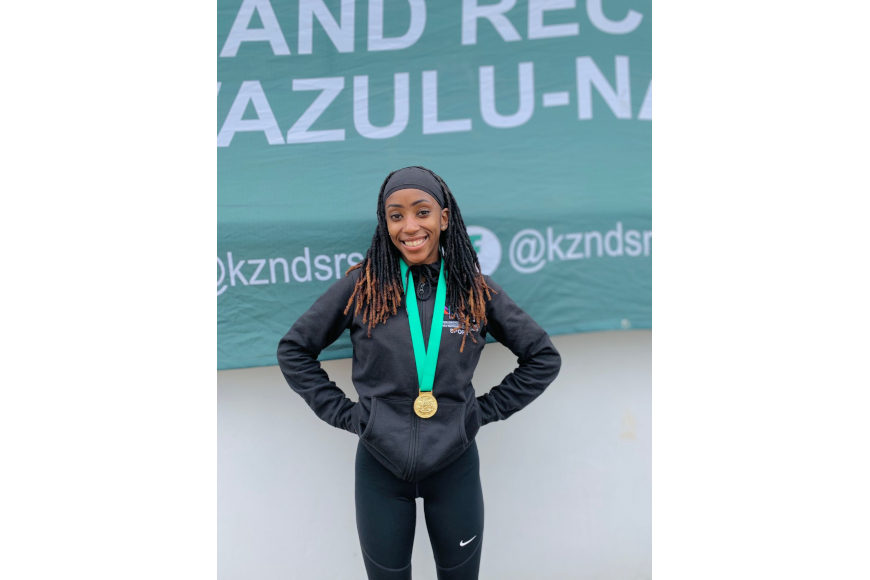 The three-day event was held at the uMsunduzi Athletics Stadium in Pietermaritzburg from 3 to 6 March 2022.

DUT’s Melody Ndlela took home a gold medal in the 100 metres in a time of 12:08, in the 200 metres her time was 26:08, placing her in second place and winning her a silver medal. She now qualifies for Athletics South Africa, the national governing body for the sport of athletics in South Africa which is based in Johannesburg.

“In my opinion, I felt like I didn’t do well enough because I’m not very used to that hard surface at the Pietermaritzburg track which is way different from the one at Kings Park Stadium. Moving forward, I will aim to adapt to new environments and learn how to run in different tracks. I think that I’m more used to training and competing at the Kings Park Stadium that’s why I’m comfortable in it, but I feel like if I get a chance to go train or compete in other tracks that will also help me a lot,” she stressed.

Coach Khulekani Gumede, commented on Melody’s performance saying that she had done a superb job.

“It was good even though this year we expected that in the 100 metres her finish time would be 12:03 and in the 200 metres she should give us a time of 25:40. However, the weather was not so good at the event which I think had an impact on her performance. As a coach I’m expecting a good performance from our DUT athletes because we have spent more time training and our preparations are more based on reaching international levels and the University Sports South Africa (USSA) next year, 2023. To the DUT community we promise to bring the best,” he said.