Electronic Voting In SA Could Soon Be Possible, Thanks To Research By DUT Expert

Electronic Voting In SA Could Soon Be Possible, Thanks To Research By DUT Expert 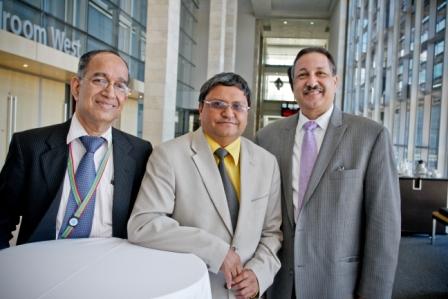 New research undertaken by a DUT based ICT expert could soon make voting using paper ballots a thing of the past in South Africa.

Colin Thakur, the Director of the e-Skills CoLab at the Durban University of Technology provided the keynote address at a two-day seminar organised by the Independent Electoral Commission (IEC) on electronic voting (e-voting) and counting technologies in Cape Town this week (Tuesday March 12, 2013). The conference was aimed at stimulating debate on e-voting and counting.

Thakur was commissioned to do research on e-voting by the IEC in 2010. The study looked at all 152 countries and took 18 months to complete.An international study of countries that had adopted, piloted, trialed, abandoned e-voting, as well as those with an expressed intention to look at e-voting were reviewed in the study to determine what impact e-voting could have in South Africa.

“Voting in South Africa is peaceful, transparent and fair. The findings of the study were that e-voting is a useful technology to enable democracy,” said Thakur. E-voting is the use of electronics to capture and count a vote. This is provided by computers with a touch screen interface, keyboard, jelly buttons and paper ballots which are optically scanned. Thakur says the technology can be used comfortably by the elderly because it also incorporates features such as large fonts, bright colours and audio output. It also relates to the youth with their penchant for technology.

While Thakur thinks this technology is useful, he admits that disadvantages do however exist. “E-voting removes the auditability of an election by taking away the paper ballot which makes it impossible to have a recount. This has a huge impact on transparency. In addition, e-voting machines are susceptible to hacks that a typical computer can go through. This (hacking) includes the illegal monitoring of votes and simulated attacks. Other reasons why we shouldn’t adopt e-voting are that voters are satisfied with the current voting mechanisms in place (in South Africa) and the initial start-up costs are high. We would need over R1 billion to initiate e-voting while South Africa has othercompeting priorities such as housing, healthcare, education, infrastructure, etc. Sustained research is however being currently undertaken to counter disadvantages (of e-voting),” said Thakur.

Although many machines have been hacked, these have occurred in simulated, laboratory, or experimental situations. An important observation here is that no evidence of prosecutable fraud was found to have occurred during any legal electoral process.

Thakur said he believes in e-voting. He said not only does it make elections quicker; it also ensures “direct democracy” where government can frequently defer to the electorate on contentious issues such as coal or nuclear plants, dams and rivers or tolling of roads. “South Africa used 460 tons of paper in the last elections. It’s possible that the use of voting machines will be a green solution. The IEC has not made a decision to adopt it (e-voting) or not. For e-voting to even be considered, there would have to be legislative changes. I am hopeful that the IEC will recommend such changes in order to begin the process of trialing and piloting to see what works in South Africa. They have not made such a call, although we must salute their reactiveness in impartially examining this issue. It’s only at this point that the adoption question can be asked”, said Thakur.