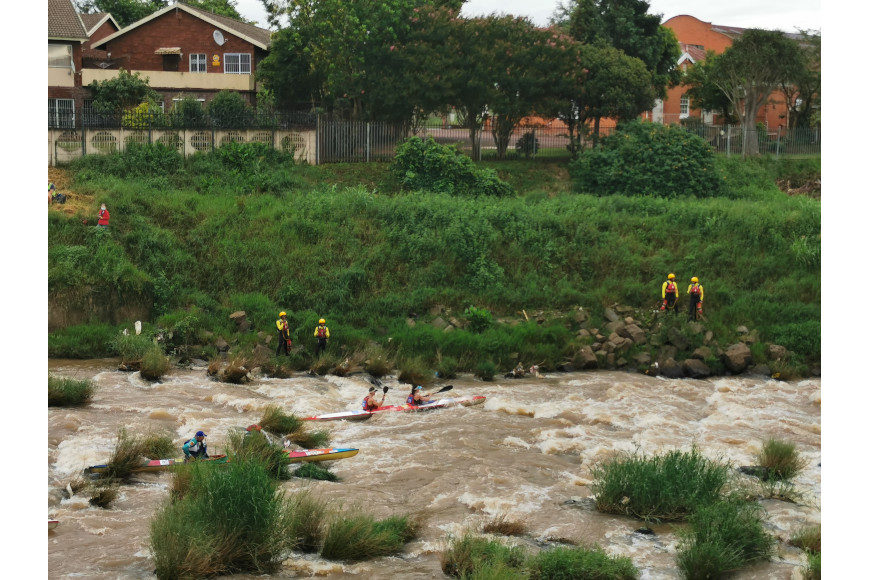 The Dusi Canoe Marathon was founded in 1951, and covers roughly 120km between the cities of Pietermaritzburg and Durban in KwaZulu-Natal on the East Coast of South Africa. It is the biggest canoeing event on the African continent, and one of the world’s most popular river marathons, attracting between 900 and 1600 paddlers each year.

Lecturer in the Department of Emergency Medical Care and Rescue at DUT, Mrs Dagmar Muhlbauer said that last Saturday, at one of the more treacherous rapids, two of the students performed an incredible swift water rescue of a female paddler that was trapped in the water and close to drowning.

“If these two students were not there and as confident as they were, that female paddler would most likely have drowned. What makes this rescue even more incredible is that one of these two students was unable to swim at all when he started the course with us in the first year,” she said.

Sharing on the rescue operation is one of the students who was part of the DUT rescue team at the Dusi Canoe Marathon, Simphiwe Majola.

He heard about Dusi in the media and never thought that his first time in the event he will play such an important role of saving a life.

“Last Saturday, Dashen Pillay and I were placed in one of the technical rapids. We were helping paddlers when they were stuck against the rocks, to prevent jamming the flow for other paddlers as that was going to cause injuries and possible fatalities. We performed this work successfully with the help from our lecturers who were on the upper part of the river,” he said.

He conveyed that the major incident occurred where the two canoes were close to each other moving through the rocks on fast flowing water and that resulted in one of the canoes being jammed against the rock with two paddlers on it.

“It capsized, water gushed inside, and one paddler was jammed against the rock and under her canoe. She was anxious and panicking as the pressure of water was pushing her further and she was struggling to breathe with water covering her face,” he stressed.

He further added that as they both (Pillay and him) saw this happening his crewmate rushed inside the river to help. He was able to lift her head making it possible for her to breathe and reassuring which helped a lot to calm her.

“I threw the throw rope for her to hold on to and pulled her out of the water to a safe area. The other paddler was already out of the water with a knee injury. Their canoe was already broken and full of water, we had to break it further, lift and push it over the rocks to clear the way for other paddlers. Our lecturers (Mr Reynolds and Mrs Muhlbauer) were further upstream and witnessed what was happening and promptly made it possible for us to perform this task by rerouting other paddlers to the other side of the river as the incident was in the rapid where the oncoming paddlers could not see it,” he said.

For Majola, his biggest fear was swimming since he had never done it before.

“I pushed myself and learnt how to swim with the help from the university. Something that makes me proud of DUT is learning how to survive in water, most of all on how to save lives through the aquatic training and providing emergency care required to any patient in emergency need,” he added.

He shared that people were telling him that swimming would be the most challenging part of the course but today swimming is one of his favourite sports.

“I’m feeling proud that I was able to save a life through my swimming skills I have learnt from the DUT. Being part of the Dusi event helped me to realise the importance of an Emergency Care Practitioner (ECP), to know how to swim, save lives through swimming skills and to know how to provide relevant and possible emergency care to those in need,” he said.

Student Dashen Pillay emphasised that being at the Dusi allowed him to put the theory and practicality of the rescue modules he had learnt in this course to test, and also highlighted why discipline and safety is so important at all times.

“It made things so much clearer as to how it works in the real world outside of the simulated situation we are put in at campus. It’s really great to be part of the bigger team we worked with like the SAPS Search and Rescue, ER24, and many other teams. I am very grateful for the opportunity I have been given to be a part of such a big team and to be a part of the DUT family,” he marvelled.

Reynolds further explained that it is crucial for DUT staff and students to be part of such events as the discipline of medical rescue is a scarce skill in South Africa and without the Departments involvement the event would be short-staffed and not properly managed from a safety and rescue aspect.

“The event also serves to allow the students an opportunity to put to practice many of the skills which they have learnt over the past three years in a very trying environment,” he said.