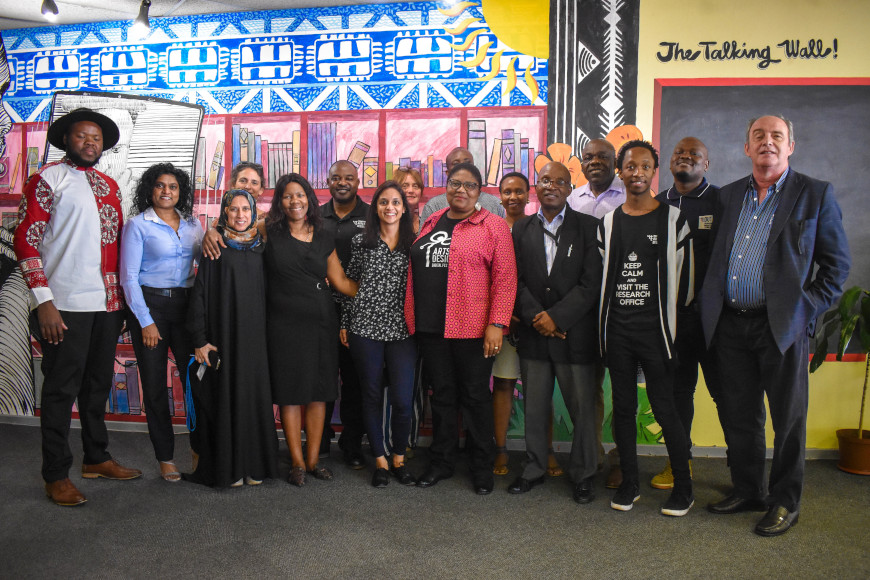 Panelists, Professor Sihawu Ngubane (University of Kwa-Zulu Natal), Dr Dianne Moodley (Durban University of Technology) and Dr Hlezi Kunju (Rhodes University) shared their language expertise in achieving what they described as a barrier of indigenous languages throughout the country.

Sociolinguist Dr Moodley presented her own study on UKZN isiZulu speaking students titled, Towards awakening latent language in South Africa, where she discovered a lack of preference in indigenous languages being used as a medium of instruction. “It’s left to its speakers to promote the language,” She said as she continued to explain why students view IsiZulu and other indigenous languages as not yet intellectualized to be used academically.

She offered a list of recommendations that can help improve indigenous languages preference amongst students such as curriculum upgrades and enforcing more financial support by “Channelling financial means towards students in the form of bursaries, get them to see the benefits of their own language.”

Dr Hlezi Kunju who was named as one of Avance Media’s 2018 Most Influential Young South African in the Personal Development & Academia category pointed out the extent of westernization in higher education institutions. He also talked about how these institutions can be used to promote indigenous languages.

“Universities should do more in complementing African languages,” he said. His objective of making African people realise the value and worth of their own language was phenomenal as he soothed the crowd to his very own IsiXhosa poem before concluding his presentation.

Dr Kunju became the first student to submit an IsiXhosa written doctoral thesis at Rhodes University which has been described as a “a milestone” for Xhosa academic writing and progressive in decolonising and transforming the education system in the country.

Professor Ngubane mentioned events in South African history which contribute to the current inequality state existing in our country saying “Ethnicity was the order of the day in segregating the same tribes,” before engaging in current University curriculums.

“Our curriculum should reflect who we are”, as he explained UKZN’s achievement of implementing a language policy that made it compulsory for students to major in IsiZulu which came into place in 2014.

He stressed the importance of enabling bilingualism between students and staff members. “Universities should use language to challenge and eradicate colonialism”, Ngubane added.

Pictured: Panellists and staff members at the FoAD Dean’s Lecture.