Fashion is Not For The Faint-Hearted

Fashion is Not For The Faint-Hearted 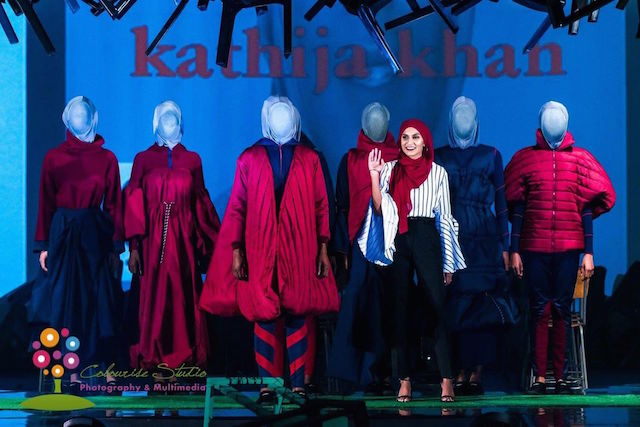 Talking to The Durban University of Technology’s Fashion and Textiles Btech student, Kathija Khan on her modest, fashion style and dreams for the future. Khan spoke of her love for the craft and the threads, sweat and hours that go into preparing for a fashion show; which is definitely not for the faint-hearted.

The talented fashionista spoke of her usage of modesty in her designs, especially during the 2017 DUT annual fashion show themed: False Gods, all about imagination and creativity.

“Fashion is not for the faint-hearted, nor for those seeking to be in the limelight, it is a both mentally and physically straining, fast paced career,” she said.

She also added that her mom and husband were a great source of inspiration for her.

“My mom is a firm believer in utilising and or pursuing any God given talent you have, and I have always had a flair for creativity so she encouraged me to pursue something in the arts field. Once visiting DUT’s department for Fashion and Textile for a tour, I was sold by the sheer brilliance and nurturing of creativity that the university offered. Throughout the years studying fashion, my husband has been a real backbone for me, always encouraging me to exceed any barriers faced and to harness my potential,” she said.

Her range was inspired by Muslim female Olympic fencing medalist Ibtihaj Muhammad, who was the first woman to take part in the Olympic Games and win a medal whilst adorning her headscarf.

Khan’s range was titled: The Voice Behind The Mask and illustrated diversity in sport; a narrative about Muslim women as fearless and bold, through graphic silhouettes representing power, strength and protection.

Her range saw the unusual usage of a face mask which was a literal depiction of fencing, the sport that Ibtihaj Muhammad is renowned for, and secondly a metaphorical resonance of non-objectifying women.

“My range was not about contemporary modesty but rather both visually and metaphorically a depiction of what muslim women are, and what they stand for. It comprises of concealing and layering of garments which depict modesty and demureness whilst also emphasizing power and potency. It demonstrates the beauty of women and sanctifies her position in Islam without having to reveal the self,” she said.

Khan stressed that fashion design requires a lot of time management, especially during 2017,  as it entailed a lot of late nights, multi-tasking, sacrifices and determination in totality.

“I enjoy pushing myself and exploring new skills, especially whilst I am still in a learning environment,” she said.

As for her future plans, she is currently completing her Btech.

“I both want to pursue a career in the industry and establish my own fashion business, God willing, my current process can be shadowed on my instagram account “@kovered_k”, which is my vision of modesty in fashion. The past three years has equipped me with the ability to pursue several avenues and it is my very aim to do so,” she said excitedly.

Pictured: Kathija  Khan with her range during the 2017 Annual DUT Fashion Show. Her range was titled: The Voice Behind The Mask.