FINDING HOME IN AN ‘UNKNOWN PLACE’

FINDING HOME IN AN ‘UNKNOWN PLACE’ 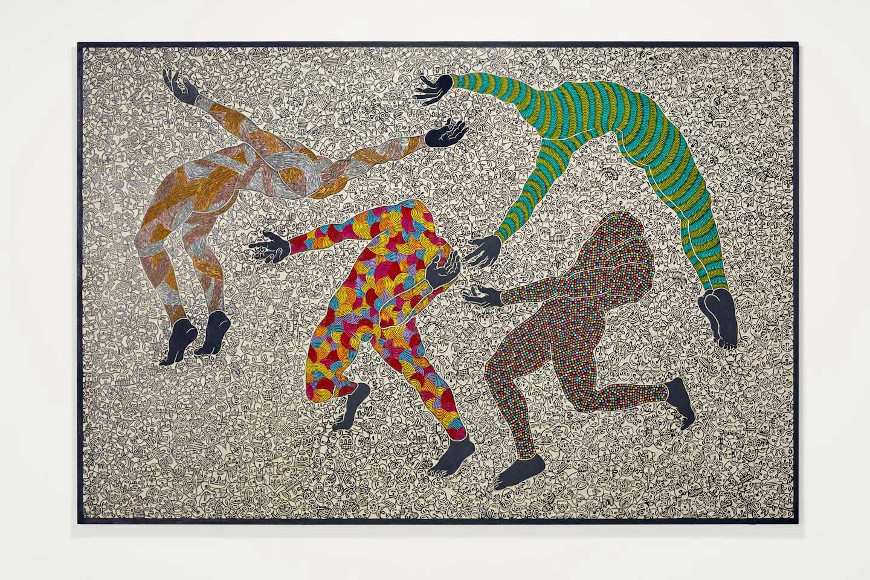 “When I found art, that’s when I found my way home,” says artist Sthenjwa Luthuli.

The title of artist Sthenjwa Luthuli’s exhibition, Inkaba Yami, which translates as “my navel” or “my umbilical cord”, is a reference to the traditional Zulu practice of burying a newborn’s umbilical cord at the home’s kraal.

“Even as the child grows and travels and has different experiences, there’s that place where Inkaba is buried; a place that’s home, a place of happiness. No matter what happens in life you can go back home and connect with your spirit and be happy,” explains Luthuli.

Inkaba Yami is made up of large-scale artworks carved in wood, with headless figures in various states of movement, the bodies covered in patterns against a patterned background. The exhibition, which opened on 18 November 2020 at WhatIfTheWorld gallery in Cape Town and will run until 16 January 2021, is the 29-year-old artist’s first solo exhibition, after having shown in various group exhibitions over the past nine years.

That difficulty with learning would lead to him dropping out of school in 2008, after Grade 9. This contributed to much unhappiness in his childhood, as well as a feeling that he didn’t quite belong. After dropping out, he had a short-lived stint working at the company where his mother was employed as domestic helper, doing handiwork. Says Luthuli: “Once I was there, I knew I needed to find a way out.”

At the same time, his mother was renting out space in their home. “There were these Malawian guys staying there and they used to paint portraits. So I told them I could draw and I asked them to teach me how to mix and work with colours, and they did,” he recalls.

The following year, in 2009, he met ceramic artist Sbonelo Luthuli (no relation): “I was like, ‘Dude, I love what you’re doing’, and I told him what I was going through and my interest in art.”

The ceramist introduced him to the The BAT [Bartel Arts Trust] Centre, a community arts development hub and cultural entertainment centre based in the Durban harbour precinct. He applied for a year-long art course at the centre, which he began in 2010. By the end of the year, he had received a merit certificate, naming him “one of the best students for that year”.

In 2011, Luthuli enrolled for the Velobala Saturday Art Classes hosted by the African Art Centre at the Durban University of Technology, and in 2012 was selected to take part in the Velobala mentorship programme.

Initially, he explored printmaking, which to this day informs his technique, albeit at a much larger scale. However, in 2017, during a three-month residency in Germany, he experienced something akin to an epiphany.

“I was lucky that there was a Documenta that year,” he says, referring to the Documenta exhibition, a major art event that takes place every five years in Germany. “I was blown away with the exhibition; I was so inspired that when I came back home I started thinking that I really needed to move out of my comfort zone.”

Until that point he had mostly worked on a smaller scale, due to limitations of the printmaking press, which he says was about “half a metre” in size. “I decided that I would no longer be working towards printing, but that I would rather blow up the scale of the actual printing block,” says Luthuli. Effectively, the carved wooden blocks, which were used to transfer the artwork onto other surfaces, would become artworks themselves and lead to the body of work that makes up Inkaba Yami.

“As I mentioned before, I feel that for the past nine years working as a visual artist I’ve been trying to find Sthenjwa. So when I decided to title the exhibition Inkaba Yami, I took that context of the burying of Inkaba, the practice on noting a space as home, and used it to indicate the space I have created for myself, which I often call an unknown space,” he explains.

The figures seen in his work are figures from this “unknown space”, which for Luthuli is at once home, a place of inspiration, and a liminal space, where the living commune with the ancestors.

“At home when we burn imphepho herbs, we often call out the names of elders who have passed on. I don’t know those people, but I see that they were these people who did beautiful things. When I create in that unknown space, I believe the people I see are like those ancestors, I feel their presence and their good energy, but I don’t know what they look like, I can’t identify them, hence here they are presented as headless figures. But I really get a sense that there are people who exist there, it is an ancestral space and I can feel them. I believe that in that space they are my guardians,” says Luthuli.

Influenced by his learning difficulties as a child, Luthuli also believes there should be more than one way to share and pass on knowledge, and he sees his art practice as having a large role to play in finding those methods.

“I’m trying to find a way in this unknown space to create new ways of learning through colour and pattern, which I also want to share with others,” says Luthuli, “For me, this space has been a space where I have finally been able to learn and explore my ideas, where I am so happy. It’s like home to me. Hence I often say that when I found art, that’s when I found a way home.”