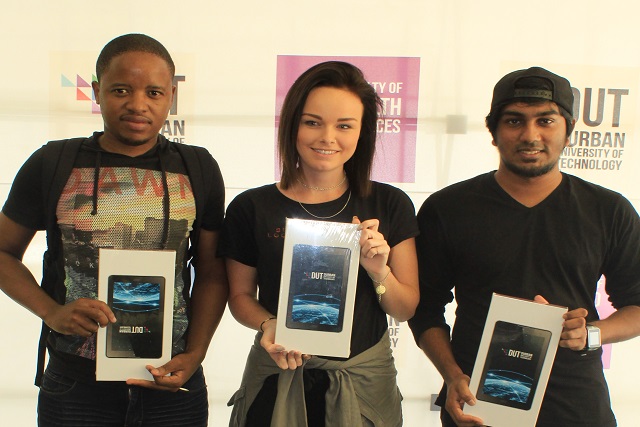 The newly, revamped DUTApp was launched in May 2017 at all seven DUT campuses, where scores of students downloaded the application. The competition which has been running since the launch will see at least 15 students receiving prizes during the World of Work (WoW) exhibition held at the DUT Sports Centre, Steve Biko Campus, this week.

On Tuesday, (1 August 2017) during the first day of WoW, six lucky students won mobile tablets. They are Glynn Erasmus, Nkululeko Mbongwa, Jessica Shuttleworth, Chikukwa Tatenda, Rowen Rajman and Ayanda Mabaso.
Upon receiving his prize, Tatenda, a DUT post-graduate student from the Department of Human Resources said, the DUTApp has been of great use to him. “I love the DUTApp! My friends and I have found it to be useful. We are even able to listen to RadioDUT without our headsets. I have been urging more people to download the DUTApp,” he said.
There are still many more great prizes to be won at the WoW event. The winners of these will be announced on day two of WoW and on 11 August 2017 during the First Year Student Experience Educational Games day. Students can still enter the competition and stand a chance to win one of the awesome prizes. To be in the draw all students need to do is go to the Playstore or Istore to download the DUTApp. Once they have downloaded it (DUTApp), they must create a profile, take a screenshot of their profile and email their entries to kareeshmag@dut.ac.za.