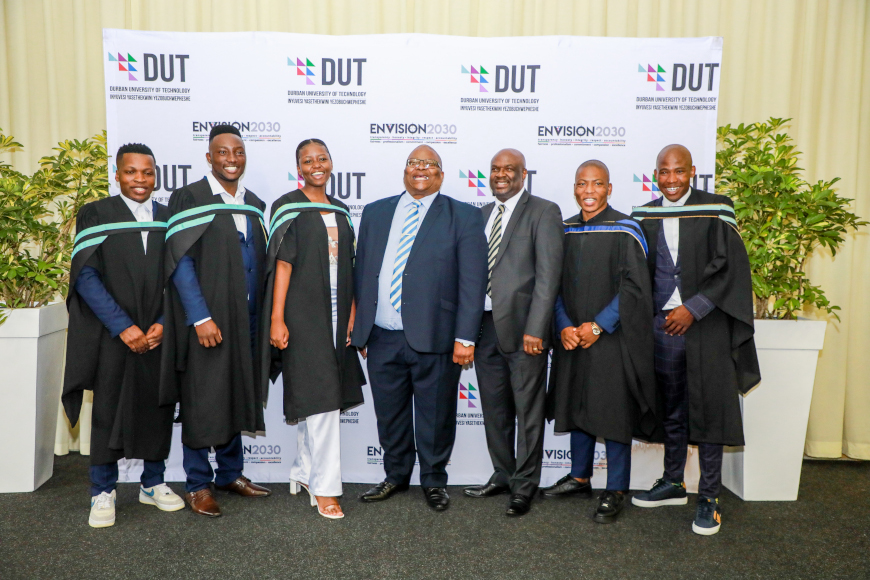 ‘Promoting academic excellence’ were five Student Representative Council (SRC) members from the Durban University of Technology (DUT) who graduated at the DUT Celebratory Graduation Ceremonies held at the Inkosi Albert Luthuli Durban International Convention Centre (ICC) for the Durban graduates from 11 July 2022 to 20 July 2022. The celebratory graduation ceremonies for the Midlands campuses were held at the Royal Showgrounds from Monday, 25 July 2022 to Wednesday, 27 July 2022.

All student leaders were ecstatic as they were conferred with their qualifications, recalling the sleepless nights and pressure of catching up on their studies since they spend most of their time attending to student matters.

The first member to grace the graduation stage was Nico Siga (23) of Dutywa, Eastern Cape, the SRC Treasurer-General for both Durban and the Midlands campuses. He obtained his National Diploma in Cost and Management Accounting at ICC on 13 July 2022. He is currently pursuing his Advanced Diploma in Accounting and plans to continue furthering his studies to a PhD level. His main wish is to inspire the youth from his home village and become a great leader.

The SRC President, Sibusiso Gumede (25) from Folweni, Durban graduated for his Advanced Diploma in Taxation at the ICC on 14 July 2022. He was proud to announce that there are five SRC members who graduated during the 2022 DUT Autumn Graduation season. He indicated that three members graduated in Durban and two members graduated in Pietermaritzburg.

“I am fortunate enough to lead with members that are performing well in their academics and also in dealing with student matters, which is their main focus. It is important to not forget the reason we joined DUT, which is to study and improve the life of our families and our homes. For some of us so we can go back home and buy mayonnaise for the first time,” said Gumede.

He indicated that promoting academic excellence as per the DUT ENVISION2030 is their main mandate since they are currently working on a big project titled Masifunde Sonke. Gumede indicated that through this project they plan to assist students with financial problems in order to ensure that every student is given a chance to study and improve their lives and those of the people around them.

Representing the females in the group was the SRC Project Officer in Durban, Snethemba Shozi (21) of Komdag in Escourt, in KwaZulu-Natal (KZN) who obtained her National Diploma in Business Administration at the ICC on 18 July 2022. She expressed that she dedicated most of her evenings catching up on her studies since during the day she spends most of her time working on programmes to entertain and develop students. She believes that entertainment should not only be about partying but students should have programmes that teach them about life and help them to improve lives and their society.

The SRC Organisation and Accommodation Officer in Pietermaritzburg, Njabulo Dlamini (26) of Willowfontein in Pietermaritzburg was the fourth member to graduate. He obtained his Advanced Diploma in Business Administration at the Royal Showgrounds on Tuesday, 26 July 2022. He is currently doing his Postgraduate Diploma in Business Administration. He indicated that his role of ensuring that students are accommodated in residences is very challenging and keeps him on his toes most of the time. In addition, Dlamini’s role also includes encouraging students to be part of the different clubs that operate within the University. Just like his SRC members, he relied mostly on his classmates and lecturers for updates on assessments and he had to make time to catch up on his studies.

Concluding the graduation was Njabulo Ntshaba (27) from Hammarsdale, the SRC Education and Transformation Officer in Pietermaritzburg. He obtained his Advanced Diploma in Public Administration at the Royal Showgrounds on Wednesday, 27 July 2022. He emphasised that it was important for a leader to lead by example and learn to make sacrifices while committing to the tasks at hand. One of his goals is to protect the reputation of the University and portray it as a University of choice. Ntshaba is currently completing his Postgraduate Diploma in the same course. His eyes are on obtaining a PhD and graduating with a red gown in the near future.

Passing his congratulatory message, the DUT Dean of Students, Dr Clement Moreku said: “It is historic to have five SRC members graduate, we are proud of them for leading by example. As student leaders, first of all they are students so they have achieved their goal by completing their different qualifications. Students come to register to study which is their core business but also there are some who take their time to become part of student leaders. This is very important as they play a critical role to represent the voice of the student body in terms of institutional decision making. They also ensure that they assist management in highlighting some of the critical points where students need to be assisted. The SRC plays a very important role in supporting efficient and effective provision of student support.”