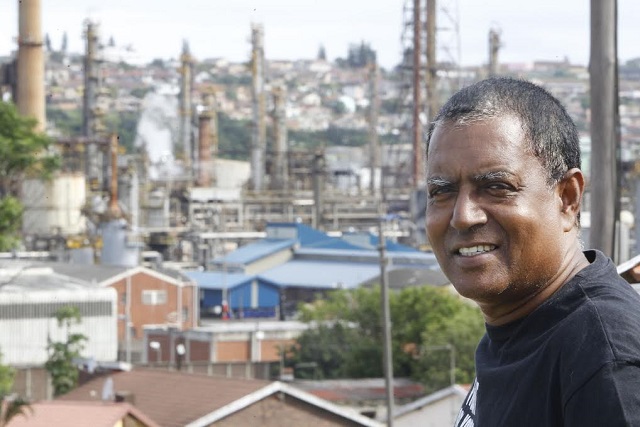 Desmond D’Sa, Durban’s 2014 Goldman Environmental Prize winner, is set to receive an Honorary Doctorate in Health Sciences from the Durban University of Technology on Wednesday, 02 September 2015.

The Honorary Doctorate, which is in honour of D’Sa’s role as a leading advocate and spokesman for social and environmental justice, will be conferred at 13h00 at the University’s Fred Crookes Sports Centre, Steve Biko Campus in Durban, during the Spring Graduation ceremony.

The Goldman Environmental Prize award, which is an environmental equivalent of a Nobel Prize or Oscar, honours grassroots environmental activists from around the world, with previous winners including the late Kenyan activist and Nobel Peace Prize laureate Wangari Maathai and Ken Saro Wiwa, who was hanged by the Nigerian military junta following his campaigns against pollution of the Niger Delta by Royal Dutch Shell and other multinational oil companies. D’Sa was also awarded $175 000 in prize money, the bulk of which he committed towards continuing the fight for environmental justice.

As a young man, D’Sa worked in the industries of South Durban where he witnessed the disregard for people’s health and the environment. This would be the spark that set alight his ambition as an outspoken social and environmental activist.

D’Sa’s career as an activist began with the lobbying for parks and playgrounds to keep Wentworth children away fromgangsterism and drugs. His work would lead to the formation of the Wentworth Development Forum. Later, D’Sa’s efforts and those of others would lead to the formation of the South Durban Environmental Alliance (SDCEA) which, for thefirst time, would unite racially-diverse communities of Wentworth, Merebank and the Bluff in the constitutional fight for a healthy environment. Through its persistent lobbying, SDCEA was successful in shutting down three hazardous South Durban based landfill sites. D’Sa’s efforts have also saved farmers – who were facing eviction from Durban’s old airport site- from eviction.

Today, the SDCEA continues to be a watchdog and champion for environmental and human rights, with D’Sa sights currently set on fighting the expansion of Durban’s port, a $10-billion project that reportedly stands to displace thousands of people without compensation and exacerbate problems such as waste management, pollution and traffic.