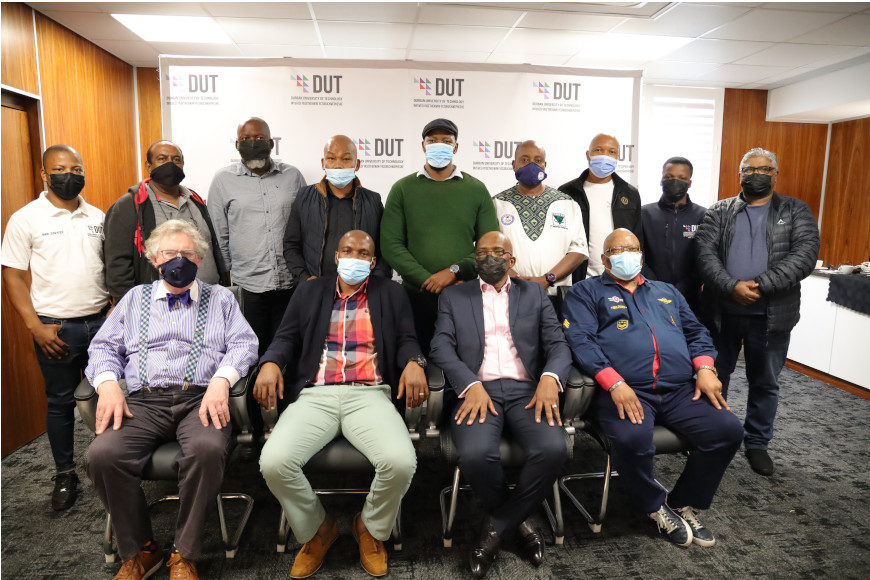 The Department of Committee Administration at the Durban University of Technology (DUT) hosted the Institutional Forum (IF) Workshop for the University’s newly constituted IF at the Council Chamber, ML Sultan Campus on Friday, 10 June 2022.

The aim of this workshop was to solidify the capacity of the IF structure in achieving its goal of contributing towards institutional transformation.

Facilitating the event was the DUT Registrar, Dr Maditsane Nkonoane who emphasised that the IF plays an important statutory role within the Higher Education sector. He pointed out that the IF at DUT has historically fell short of discharging this statutory mandate largely due to short comings related to the role confusion.

Welcoming the guests, Dr Nkonoane said IF needs to claim its rightful place/space in the University’s transformation agenda.

“What we have overtime become has actually resulted in the erosion of what this body was contemplated to be. In fact, it is a betrayal to the founding fathers of the Broad Transformation Forums of the 1990s, which eventually became Institutional Forums,” said Dr Nkonoane.

He extended a special welcome to the guest speaker, the former University of Cape Town Registrar, Mr Hugh Amoore who presented on the statutory role and responsibilities of the IF. Dr Nkonoane further introduced the DUT Vice-Chancellor and Principal, Professor Thandwa Mthembu whose address was based on DUT’s Transformation from 2016 when he joined DUT to date. He revealed that Prof Mthembu is also counted among the founding fathers of the Broad Transformation Forum at the erstwhile Vista University during his younger days. The Registrar expressed his appreciation to Prof Mthembu for raising his hand to be part of this workshop as soon as he became aware of it.

Prof Mthembu began by speaking briefly about when he joined DUT on 01 October 2016 and his first Council workshop which was held on 18 November 2016. He described it as a defining moment in terms of what he intended to do as the Vice-Chancellor and Principal of DUT. According to Prof Mthembu, most leaders when joining a new organisation want to implant something new, however, he explained that he decided to stay with what DUT had, the Strategic Plan 2015-2019 and tweaked it slightly to the develop the Strategic Plan 2.0.

“What I presented then to Council then after only seven weeks I had started here has its footprints everywhere in ENVISION2030. Preparing for my interview, I looked at the Strategic Plan 2015-2019 and I could already see what I needed to do. With any plan, we need to approach it with an adaptive mind-set because things do happen when you have a plan, they require you to have a deeper look into what you currently have. Even the ENVISION2030 will undergo that process. I’m hoping some of you like me can even in your sleep be asked to stay something about ENVISION2030 and tell people what it is about. I hope that is how embedded it has become,” said Prof Mthembu.

He gave insight about his transformation journey when he landed at DUT, his first Council workshop, the nuance Strategic Plan 2.0 leading to ENVISION2030. Prof Mthembu spoke the importance of DUT to have the right people in the right sits, making reference to a matter letting go of academics without Master’s degrees. He said most universities require an academic to have a PhD. Defining DUT’s people, he said they must be creative and productive excluding those who want to ruin its reputation. In addition, Prof Mthembu pleaded with the DUT community to work towards a common future and not compromise the future of those who have not reached DUT. Those yet to come to DUT, Prof Mthembu said they must find it alive as a centre of excellence.

After Prof Mthembu’s address, attendees had a chance to engage with him and pose questions on issues they needed clarity on.

Former UCT Registrar, Mr Hugh Amoore indicated that the IF was seen as a way of broadening participation in addressing institutional issues, especially transformation. He further stated that the role of IF is to advise Council, but Council is not bound to accept the advice given. However, Amoore noted that when Council does not take the advice, it gives written reasons for not doing so.

He spoke at length about what IF should do and not do, unpacking the role of the Chair and the members and gave examples on issues it can advise the Council on. His presentation was followed by a lengthy discussion from the IF Chair, Dr Zamokuhle Mbandlwa and the members seeking clarity on issues they can tackle to ensure that they do not confuse their role.

Also on attendance at the workshop was Dr David Mohale, Director: Special Projects in the Office of the Vice-Chancellor and Principal who proposed that another session be organised to ensure that Amoore’s knowledge is properly passed on to the IF members. Dr Mbandlwa seconded this suggestion and thanked Amoore for an insightful presentation.

Pictured: Attendes of the IF Workshop.