LEARNERS FROM MAYVILLE SECONDARY SCHOOL GET EXPOSED TO THE CHINESE CULTURE

LEARNERS FROM MAYVILLE SECONDARY SCHOOL GET EXPOSED TO THE CHINESE CULTURE 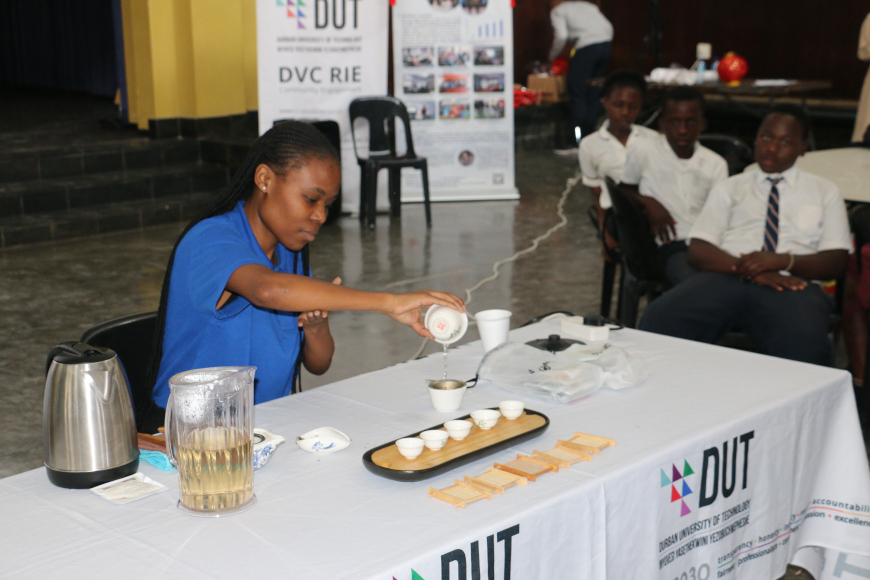 Diversity is one of the trademarks of our vibrant country. However, there are often very few opportunities for people to actively learn about the customs of other cultural groups within their communities or society at large. The Chinese Cultural Day hosted by the Durban University of Technology (DUT) Confucius Institute (CI), the Deputy Vice-Chancellor: Research, Innovation and Engagement (DVC: RIE), Community Engagement Office and a local non-governmental organisation (NGO), the Umkhumbane Schools Project (USP), sought to expose Grade 8 learners at Mayville Secondary School, Durban to some of the cornerstones of the Chinese culture.

The programme was split into three large segments, with each exploring popular Chinese customs, namely martial arts, Chinese paper cutting, and Chinese tea culture. The Grade 8s were split evenly and invited to participate in at least one of the three planned activities. The activities were facilitated by DUT local Mandarin lecturer, Mr Sanele Ntuli, and students Ms Wendy Kunene and Ms Nompilo Mkhulisi, who are all now well-versed in Chinese culture and Mandarin, through their work with the Confucius Institute. They were further assisted by the Confucius Institute Project Coordinator, Ms Weiwei Zeng and Mr Frank Lin Wu, Director of the Confucius Institute at DUT.

On the day, the first session was Tai Chi facilitated by Mr Sanele Ntuli.

Ntuli carefully guided the learners through a series of intricate Tai Chi movements that would be used to form a routine. Tai Chi is a form of martial arts that has a variety of health and meditation benefits but can also be used as a form of defence training. The learners observed avidly, and carefully mimicked each move. After a few practice rounds, the learners were then invited to volunteer to perform the routine that they had just been taught. The few brave learners who initially volunteered to perform the routine in front of their peers did a stellar job at demonstrating the ancient martial arts form and were rewarded with prizes from the Confucius Institute and the DVC RIE Community Engagement Office.

The second session was equally engaging, as learners took on the art form of Chinese paper cutting. Chinese paper cutting involves precisely cutting out shapes on paper to reveal intricate designs that can be used for decorative purposes. This beautiful art form dates to the second century CE. The learners excitedly cut out their designs, eager to see the outcome. Their excitement peaked when they found out that they could also take home their bold designs to share with their families. The third and final session was centred on the custom of Chinese tea culture. The learners were shown a detailed demonstration of tea making using jasmine tea from the Fuzhou region of Fujian province, China. Thereafter the learners were given an opportunity to taste the tea.

Overall, the event was a huge success, and the learners were enthralled by every aspect of Chinese culture that was shared by the Confucius Institute. The event was a remarkable reminder of how a simple exchange of cultures and information can change the perceptions and attitudes of individuals.

When reflecting on the event, Lin Wu said that he was grateful the CI partnered with the team from DVC RIE Community Engagement Office, supported by USP to create a unique opportunity for the kids to learn about the Chinese culture.

“It is not only about China and Chinese culture, but also a way to open their minds and to encourage them to look around the world and inspire their potential,” he said.