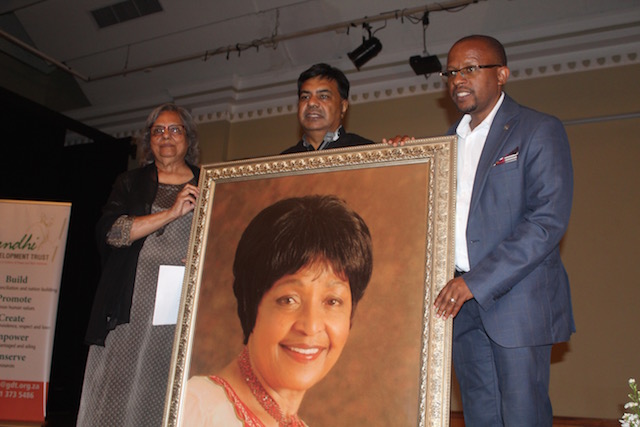 The remarkable life of Winnie Madikizela-Mandela was celebrated with a moving tribute which featured the screening of a documentary on her life.

The Madikizela-Mandela memorial was part of the annual Mahatma Gandhi Media Lecture, which was hosted by the Durban University of Technology’s (DUT), Journalism programme in partnership with the Gandhi Development Trust (GDT) at DUT’s City Campus on Wednesday, 11 April 2018.

The documentary features Madikizela-Mandela’s childhood and youth when she lived in the village of Bizana. It also shows an interview with her telling how she met Nelson Mandela, who asked her to raise funds for the treason trial. This video tribute was produced by the renowned filmmaker Anant Singh who was also in attendance during the lecture.

Speaking about his fond memories of Madikizela-Mandela during the lecture, Singh said Madikizela-Mandela had amazing tenacity, she was very courageous and had a remarkable memory. “When I was just becoming a filmmaker, Fatima Meer introduced us. She had tenacity and courage; she was holding the torch while her husband and others were in prison. I had immense admiration for her,” said Singh.

“When Mandela passed away, there was a lot of rhetoric about change, but nothing changed. Let the passing of Madikizela-Mandela bring about change through action not rhetoric,” said Hatang.

Hatang said Madikizela-Mandela should not only be remembered as a defiant fighter, but she should also be remembered for her warmth as a caring mother of the nation.

“Unlike her husband, she was subjected to torture in prison, and she carried that damage throughout her life. When I remember Mama Winnie, I don’t remember her as a fighter, I remember her comforting arm wrapped around those who needed it,” said Hatang.

Hatang also urged journalism students not to be swayed by the narrative, but rather to shape the narrative. “Please hold on to good ethical values of journalism,” said Hatang.

Pictured: From left, Ela Gandhi and Advocate Robin Sewlal handing over the portrait of Winnie Madikizela-Mandela to Sello Hatang as a token of appreciation during the Mahatma Gandhi Media Lecture at DUT’s City Campus yesterday, 11 April 2018.