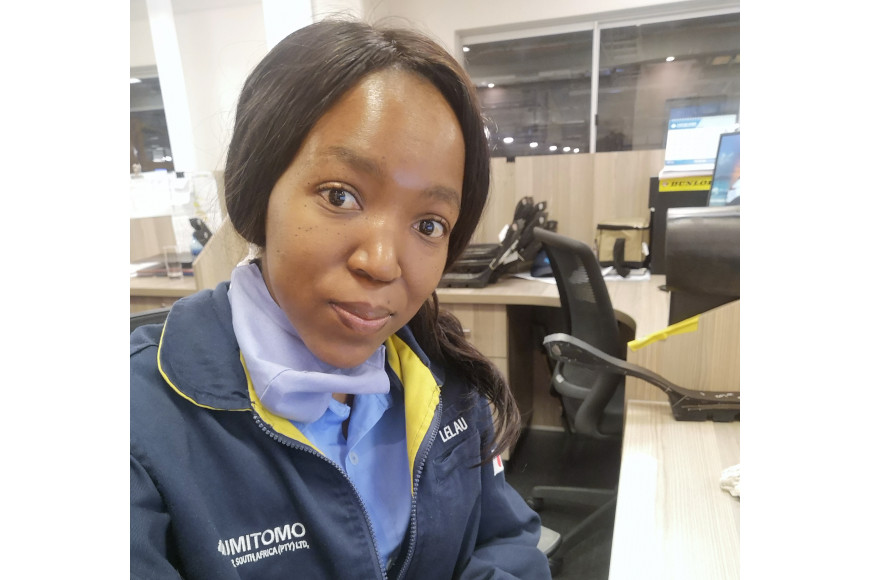 The Durban University of Technology’s (DUT’s) Mechanical Engineering Alumna, Lelau Mojela (30) is fascinated by being the only female in her department at Sumitomo Rubber South Africa, the manufacturer of the Dunlop tyre brand in Ladysmith.

Mojela who completed her National Diploma in Mechanical Engineering at DUT in 2012 joined Sumitomo as a Process Engineer in 2017. Speaking about her department that designs and manufactures tyres from scratch, Mojela said she is the only female working with five males.

“When we design, we look at the kind of tyre the market wants, whether it is in line with the competitors tyre. We make sure that the tyre meets the requirements of the industry. It doesn’t worry me at all being the only female in my department because it’s my manager then me and the guys. When my manager is not around I have to fill up most of the roles. I have to keep on proving that I am capable. It’s fascinating for me because I know I have to prove that I can do it,” said Mojela.

One of the difficulties she faces is dealing with people who undermine her just because she is a women and feel that they know better. She said she is used to such behaviour and has learnt to take it so well as it does not scare her. Her advice to women wanting to excel in a male-dominated field is to never feel sorry for themselves or feel that they are underachievers just because they are not able to do certain things.

“For example, I cannot underrate my value just because I cannot lift a 70kg tyre the way some of my male counterparts can, but I can excel in other areas. It is not all about the physical, but about how you apply your mind in the workplace, a willingness to learn and being dedicated to your job,” she said.

Her typical day in the factory starts at 7:30am, moving between the factory floor supervising tyre builds, office planning and working through designs. She revealed that despite juggling her busy work schedule and being a mother to a baby boy, she still finds the time to spend with her family.

No matter how tired she is, she stated that the kitchen is her place of joy as cooking remains one of her passions. Her journey at DUT was apparently not easy at first as she was an 18-year old from Polokwane in Limpopo who could not speak IsiZulu, making it difficult to find her way around Durban. When she lost her mother in her first semester, she nearly gave up on the dreams that brought her to Durban. However, she had the support of her older brother who was studying Civil Engineering at the Mangosuthu University of Technology (MUT).

Mojela stated that Steve Biko campus was filled with too many males because of the engineering courses on campus. She said this was not a struggle for her since she came from a technical high school. After struggling to obtain the in-service training, Mojela said she was awarded an opportunity to complete it at DUT, working at the lab that deals with Masters students. “I went to Professor Krishnan Kanny who does a lot of research for Masters students in Mechanical Engineering and he gave me the job. At the end of my in-service training I kept applying for jobs. Dunlop offered me Work-Integrated Learning (WIL) training and wanted me to start from scratch.

I worked for them for two years and in 2014 the company closed down. I went back home and in 2016 I went back to school to study my BTech. In 2017, Dunlop called me back to the Ladysmith factory and told me there is a position and that is how they took me back,” said Mojela.

Her advice to the current DUT students, especially females in Mechanical Engineering, is to be not comfortable with what they have, keep pushing and be willing to start small. She advised that they study further in order to be recognised because a diploma is just like a matric certificate in their industry.