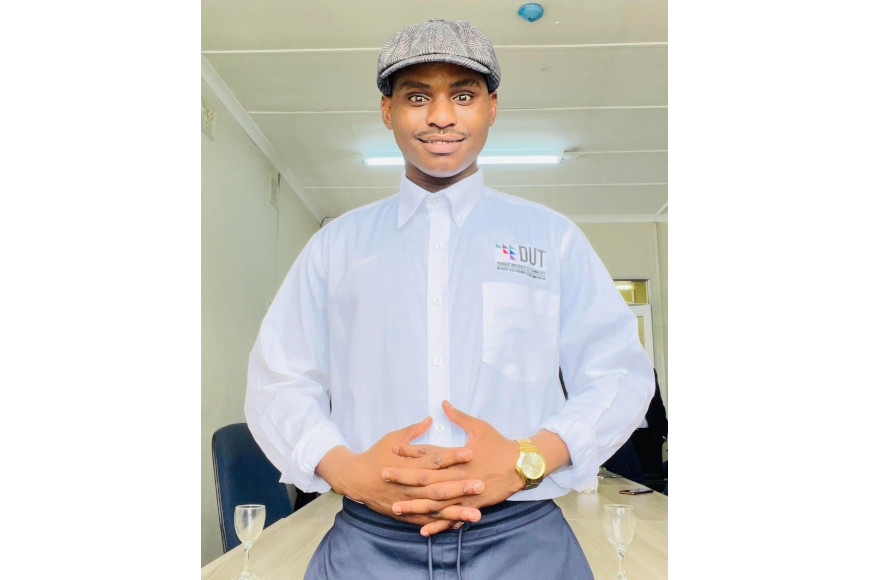 The 2022/23 Student Representative Council (SRC) President at the Durban University of Technology (DUT), Mr Sanele Khumalo recently had an interview with the DUT Communications team and DUT Media Officer, Ms Simangele Zuma to formally introduce him to the DUT community.

Khumalo (26) of KwaMsane township in Umtubatuba in the north of KwaZulu-Natal, is the last born of seven children. He completed his National Diploma in Information and Communications Technology (ICT) at DUT, last year, 2022.

Speaking about his journey at DUT, Khumalo said he joined the university in 2020. He pointed out that his tertiary education journey has not been an easy one. Khumalo revealed that DUT gave him a second chance into getting a tertiary qualification and achieving his dreams.

“I matriculated in 2014 and then I enrolled at the University of KwaZulu-Natal (UKZN) for my Bachelor of Science degree, majoring in Genetics. I was studying at UKZN from 2015 to 2018, until I got academically excluded after failing to balance politics with my academics. I was politically active, contesting elections and wanting to make sure that my political party became dominant in the university. I was the one who established the Economic Freedom Fighters Student Command (EFFSC) at UKZN,” said Khumalo.

After being excluded at UKZN, Khumalo said he spent 2019 in Durban, staying with friends, afraid of going back home to break the news to his family who were expecting him to come back with a qualification. In 2020, this is when he received a second chance in education and to start afresh. “I was ecstatic when I learnt that DUT had accepted my plea to study at a tertiary institution once again, this was a second chance and I opted to pursue studies in ICT,” explained Khumalo.

Furthermore, Khumalo’s decision to try again was because he felt that he had left Umtubatuba with the hope to return as a graduate and there was no way he was going to back down and dwell in self-pity for a mistake he was instrumental in. “I came to DUT because I felt I deserved a chance to get my own qualification, just like the students that I always helped to get their qualifications. I remembered that my main purpose of going to university was to get a qualification and I did not want to disappoint my family by returning home empty handed. As soon as I registered at DUT, I went back home to tell them the truth about my studies. At DUT, I managed to find a balance between my studies and politics,” said Khumalo who will graduate during DUT’s 2023 Autumn Graduation, which will be held in May, this year.

He spoke briefly about joining politics at DUT despite having politics previously leading to him to being academically excluded at UKZN. According to Khumalo, he never stopped being politically affiliated as he was passionate about the success of his political party. His strategy was being politically active and not lead until he is in his final year so that his studies were not affected. Putting up a list on the wall with all his assessment dates and reminders of test dates, is what helped him to keep abreast with his academics at DUT.

Getting into his role as the SRC President, he said his goal is to lead a disciplined body that does things the DUT way and will not get itself suspended.

“I have discovered that what happens here at DUT, is that you get elected by many of the students to be in the SRC. Immediately when you get into the SRC office you either forget the actual mandate while fighting for students and end up being suspended. Majority of the students vote for you to go and champion their issues and fight for them inside the office in a disciplined manner, but you end up not fighting because you are excluded by the system. We need to fully understand the DUT system to be effective in our fight for students, so we do not disappoint who have invested their trust in us and voted for us,” said Khumalo.

Lastly, his message to the students is that they should only follow university protocol when addressing their matters since there is only one official student representative council that is affirmed by the university and that is the 15 SRC members they voted for and not be misled by people who give out wrong information on the name of the SRC.