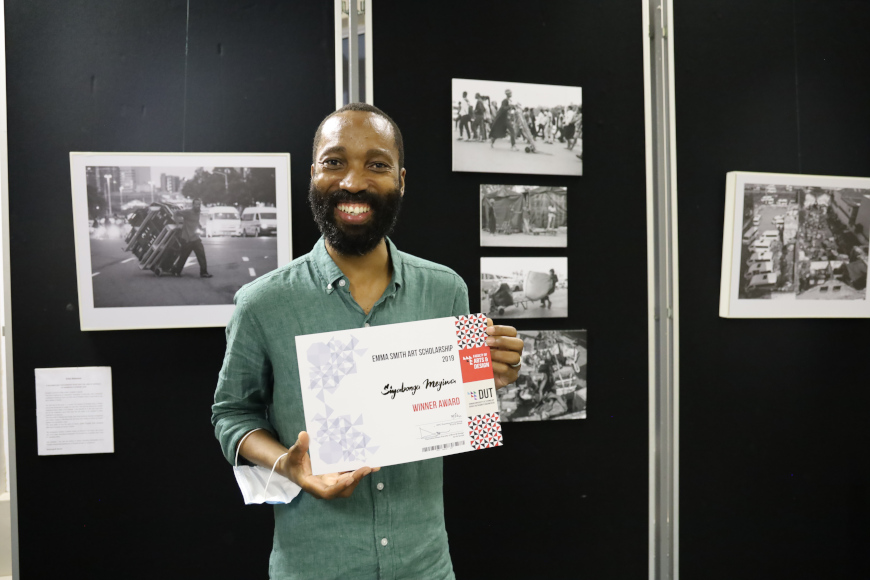 The Emma Smith Art Awards ceremony was hosted by the Faculty of Arts and Design (FAoD) at the Arthur Smith Hall, at DUT’s City Campus last Wednesday, 18 November 2020.

There were exhibitions of the nominees work at the two Interior and Graphic rooms, where viewing was restricted to invited guests only, following strict COVID-19 regulations.

Facilitating the ceremony was the Deputy Dean of the Faculty of Arts and Design, Professor Brian Pearce who gave a brief background on the Emma Smith Art Scholarship.

He said this scholarship was established in April 1920 by Senator Sir Charles G Smith, a sugar magnate, in memory of his mother. The idea was to enable an outstanding student in each year to study overseas.

Prof Pearce said the original award was made in recognition of John Adams, who was the Head of the Art School and an influential figure in education and the arts in Natal.

“He was a graduate of the Royal College of Art and under his leadership the Durban School of Arts established its reputation not only in the field of Fine Art but also in the Applied Arts. It is on the basis of his pioneering work that the Faculty of Art and Design maintains its high reputation in the modern, technological world,” said Prof Pearce.

He thanked the judges of the competition for taking up their time to help the faculty to reach its decision.

After being announced as the winner, Meyiwa was out of words as he had tough competition and was not convinced that he had a chance on winning.

Meyiwa’s won after presenting a documentary photography study into the lives of oS’gadla (trolley pullers).

He said his work was inspired by an experience from 10 years ago, when he witnessed a pedestrian refusing to move out of the way of uS’gadla pulling a heavy load on Joe Slovo Street in Durban.

“The main aim to this study was to present the narrative of oS’gadla living in Durban and provide Durbanites an insight into their lives. This work has allowed me to better understand what it takes to be uS’gadla. It also allowed me to see how much more we do not understand about their lives that still needs to be explored to better understand who they are. This study looked at among other things, their living conditions; financial management and matters relating to difficulties they find living and working in Durban as migrant workers from the Eastern Cape,” said Meyiwa.

He said his aim was not to make interesting photographs but to honestly present lived experiences of oS’gadla through his camera lens.

Lastly, he thanked the faculty for giving him this opportunity and said he was honoured as he believes that he comes after great individuals who are still working hard to leave a mark in their respected career paths.