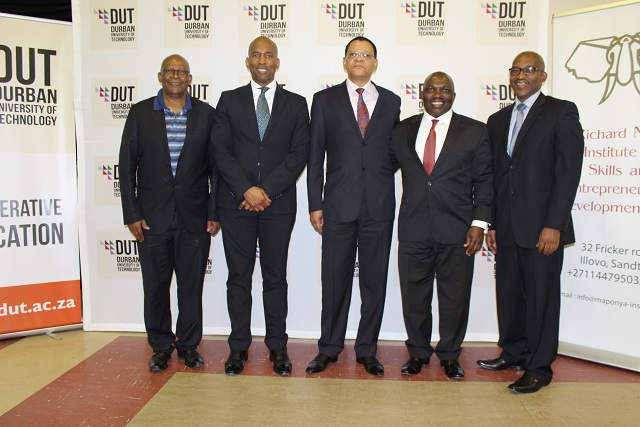 The Durban University of Technology hosted the annual Dr Richard Maponya entrepreneurship workshop and lecture at DUT’s Ritson Campus, on  5 September 2017. The event was organised by DUT’s Co-Operative Education Department under the helm of the director, Mr Shakeel Ori.

Dr Richard Maponya is an entrepreneur and property developer, a pioneer in business against all odds. He is best known for having built a highly successful business empire despite the restrictions of apartheid. He is now the proud owner of the Maponya Mall, established at the end of 2007, in Soweto. The 96-year old’s business achievement speaks volumes. He has won numerous awards including the Small Business Excellence award (2007), World Enterprise award in 2008, was a recipient of the Top 100 Companies Award: Business Times (2008), Lifetime Achievement award and a BEE Entrepreneur award, to name but a few.

Speaking at the event was Mr Roy Maponya, CEO of the Dr Richard Maponya Institute for Entrepreneurship, who thanked DUT for the opportunity for working with the institute and running annual lectures in KwaZulu-Natal. He also conveyed Dr Richard Maponya’s message of love and expressed his sadness at not being able to attend the event. “At the end of this year, (2017), Dr Richard Maponya will celebrate his 97th birthday. He keeps everyone on their toes and continues to control some of his businesses, proving that he has always been a hands-on entrepreneur,” he said proudly.

His legacy is the establishment of the Dr Richard Maponya Institute for Skills and Entrepreneurship Development in 2014, which he calls his gift to South Africa. “The primary objective of the institution is to develop skills among young, learner entrepreneurs in diverse sectors of the economy, and to also address the high unemployment rate. The aim is to be able to inspire more students to start their own businesses one day and inculcate the ‘maponya way’ of becoming entrepreneurs,” he said.

(The Maponya Way is based on the entrepreneurship model of the Brazilian National Service for Industrial Training (SENAI), which when first implemented, saw Brazil’s unemployment drop from around 40% to less than 5%). He’s proud of the partnership with DUT and hopes it grows stronger in time.
“Let us not relegate as spectators but play our part as good helpers and continue to promote our youth to be productive and key drivers of innovation,” added Mr Maponya.

The keynote speaker at the event was Mr Moses Tembe, who spoke on entrepreneurship and the legacy of Dr Richard Maponya and his tenacity which reminds South Africans that whilst the country is confronted with challenges, one should never lose hope, faith and love.
Moses Tembe’s illustrious business career spans almost three decades and includes spearheading several major developments in KwaZulu-Natal, including the development of the Point Waterfront, Suncoast, Richards Bay Eco Junction.

Tembe received numerous awards, including the Ithala Business award and Investec Entrepreneur award. An extremely proud and fulfilling moment for him was the incorporation of Moses Tembe Foundation three years ago. The foundation aims to make a difference in the world of entrepreneurship, education and the arts.

“This lecture aims to prove the need for skills development in entrepreneurship while gleaning on the life of Dr Richard Maponya, fondly known to South Africans as the father of township business. It serves to question how skills development, through entrepreneurship, could contribute to mitigating South Africa’s number one economic conundrum, the triple challenge: poverty, inequality, and unemployment,” he said.
He added that Dr Maponya managed to invest in the future, not the past and how he was able to identify the needs of society, and strategically place himself in a position to solve some of those problems while attending to his responsibilities as a husband, father and community leader.

“The art of the popular South African colloquial idiom, ‘a boer maak a plan,’ is not to be underrated. In fact, every entrepreneur ‘makes a plan.’ To have a vision that persists through adversity was a display of resilience by Dr Maponya. Without electrification or refrigeration in Soweto, he established Maponya’ s dairy products -that ‘s
initiative and opportunism at its best,” said Mr Tembe.
He spoke of the establishment of The Dr Richard Maponya Institute for Skills and Entrepreneurship Development foundation which identified skills as a critical success factor in the development of true entrepreneurs in South Africa.
He also touched on family-owned businesses and that not enough attention was being given to this prototype in South Africa, a tried and tested way of developing skills, empowering entrepreneurs and advancing South Africa’s economy.
“Successful and proven family businesses like Dr Maponya’ s and many other established family businesses overseas, could be ideal for training young South African entrepreneurs, allowing them to accumulate knowledge and skills that have been developed over decades. For entrepreneurs to survive in the 21st century, hard and soft skills are a cardinal success factor. Skills, innovation and talent, are driving forces that will guarantee younger entrepreneurs phenomenal success in the fourth industrial revolution,” he said.

Professor Thandwa Mthembu, vice-chancellor and principal of DUT, thanked all the guests, business stakeholders, NGO’s, DUT staff and students, for their attendance at such an important event on the DUT calendar. He also reiterated the importance of entrepreneurship and said that DUT has plans in place around educational philosophies. “We want to ensure we produce more entrepreneur months, it’s all coming together and culminated in this lecture. If we had to take 14 (0,05%) students that could take their business designs/models through set programmes, to make them entrepreneurs, and to contribute to building the economy of our country, it would be beneficial to both the students and the economy. I am calling upon the keynote speaker and many other business institutes to help us (DUT) reach this goal, not only make our students as competitive entrepreneurs in South Africa but globally. So that 0,05% students can go out as tried and tested entrepreneurs, creating jobs, that’s the challenge all our partners will need to work upon over the years to come,” he said.

The next annual KwaZulu-Natal Dr Richard Maponya lecture will be hosted by DUT and the keynote address will be delivered by Dr Feridun Hamdullahpur (president and vice-chancellor of the University of Waterloo, Canada), on 17 July 2018.