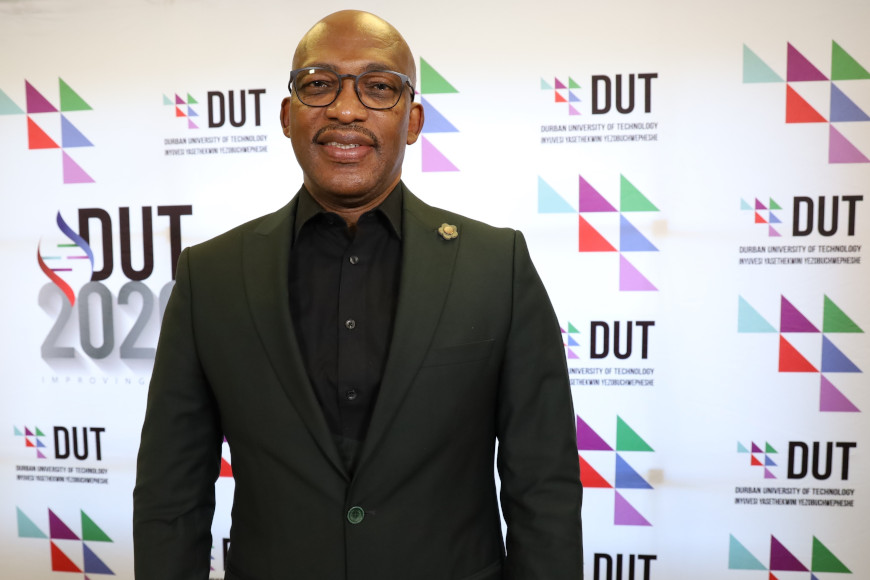 Durban University of Technology’s (DUT’s) Vice-Chancellor and Principal Professor Thandwa Mthembu expressed his elation upon learning of the institution’s excellent, international University World Rankings, giving thanks to the right people living the principles of commitment and excellence.

Prof Mthembu gave his congratulatory message whilst addressing the DUT community through his video message regarding last week’s announcement by the Times Higher Education’s World University Rankings, showcasing DUT being one of the top five South African universities and among the best in the world, ranking 10th in the world for Citations.

The global performance ranking judged research-orientated universities of more than 1500 universities across 93 countries and regions. This year’s ranking analysed more than 80 million citations across over 13 million research publications and included survey responses from 22,000 scholars globally.

He said that DUT’s ranking proves there are no boundaries in performance, pointing out that those who have come to know DUT better and have had the opportunity to work at the institution, are not surprised given its trajectory on research and innovation over the last 10 years, and more especially over the last four years since he has been at the helm.

Prof Mthembu also gave more clarity on the five areas of assessment in which Report on the Evaluation of the 2018 Universities’ Research Outputs” focused on, namely Teaching, Research, Citations, Industry Income and the International Outlook, emphasizing some of the achievements in research, and citations thereof, that have been on record nationally and positively which led to such a global recognition.

Prof Mthembu said that an analysis of a recent publication by the Department of Higher Education and Training (DHET) titled: “Report on the Evaluation of the 2018 Universities’ Research Outputs” indicated that based on DUT’s research outputs, its weighted research output per capita ratio is 1.11 units; up from 0.8 of a unit in 2016.

“DUT’s research impact, in terms of SciVal (a Scopus data analytics tool), shows that DUT’s field-weighted citation impact to date is 2.74. This means that DUT’s publications have been cited by fellow researchers in the world 274% more than the global average of 1. This is what has directly contributed to DUT being ranked 10th in the world on citations,” he said proudly.

He added that by the end of 2019, DUT had increased its researcher/author base by almost 70% over the years since 2017. “Between 2018 and 2019, at 58%, the highest increase was among researchers/authors of African descent. This proves without doubt that transformation in the coveted research arena is not just possible; but can be achieved. The number of our NRF-rated researchers increased by 42% over the years since 2016. NRF-ratings are a great measure of research excellence, leadership and impact. There is no gainsaying that this significant increase has been one of our ladders to greater heights,” he said.

Prof Mthembu indicated that achievements like these only happen when researchers/authors, research leaders/managers, the broader management and Council focus collaboratively and doggedly on the University’s goals.

“On behalf of Management and Council, may I add, my vocabulary fails me in how to thank our people who have made this possible. You are tough. You are the right people in the right seats, playing your roles right. Amongst many supporters of our research and staff development, we thank the NRF under the leadership of Dr Molapo Qhobela, and the rest of our science councils; the Department of Science and Innovation and the Department of Higher Education and Training under the leadership of our Minister, Dr Nzimande, for their unstinting support over the years. We also thank many funders of our research by foundations, national and international, the corporate sector and other government departments and agencies,” he said.

Furthermore, Prof Mthembu hopes that this gives current and prospective students, staff, parents, sponsors, DUT collaborators and partners confidence that DUT is the place to be and the best choice to start their careers.“We are now on a rocket to space, as our ENVISION 2030 strategy implores us. We are Different, Upended and Transforming. We are DUT,” said Prof Mthembu.