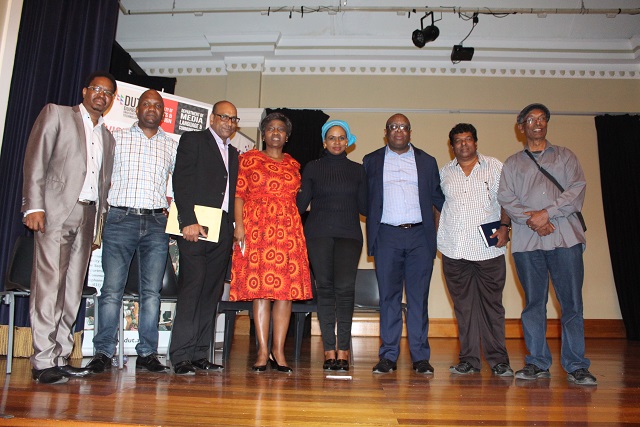 Looking at reviewing the South African Broadcasting Corporation’s (SABC’s) 2004 editorial policies is currently the reason behind the public hearings being held in every province in South Africa, where the audience, community organisations and the general public are being given the opportunity to contribute to shaping the SABC’s editorial policies through oral or written submissions by 31 August 2017.

The SABC has begun with its road show workshop where SABC representatives such as Kaizer Kganyago, Thandeka Mbeki, Fikile Skosana, Zamambo Mkhize, Bongani Mpanza and Alvin Pillay, to name but a few, were given the platform to present the current policies, at the Durban University of Technology, Arthur Smith Hall, City campus on Monday, 13 August 2017. The workshop which was coordinated by the Department of Journalism’s Robin Sewlal became a platform to hear staff, students, and cultural organisations, on their views and concerns on the current, editorial policies at SABC.

According to the SABC code of conduct, it defines itself to try and be the most extensive, all-inclusive and diverse news organisation in South Africa, and to provide consistent, relevant, information and analysis on which all South Africans can rely as they discuss and deliberate, form opinions and build a common future.

The Independent Broadcasting Authority Act, the Broadcasting Act, the Code of Conduct for Broadcasters and the SABC’s Editorial Code are some of the acts that set out the essential requirements for news and current affairs services that are to be studied, understood and observed by every member of the SABC’s news staff. The policy covers all the news, current affairs and information programming broadcast by the SABC, including news bulletins and current affairs programmes provided for radio, television and SABC Africa. In 2013, the corporation undertook a process to review the 2004 policies, which culminated in 2016 with policies being filed with the Independent Communications Authority of South Africa (ICASA). The policies were later rejected by ICASA, which further ordered that the amendment by the SABC Board of its editorial policies was invalid in terms of the Broadcasting Act No 4 of 1999, and the 2004 SABC’s editorial policies “accordingly remain valid”.

The SABC have come to now understand that the audiences are not happy with certain policies and need to voice their concerns, opinions as well as what changes they would like to see via such a public consultation process. Issues pertaining to culture, languages, the disabled audiences, the youth and cultural programmes, were some of the highlights of discussion at the event held at DUT.

Audience member, Anisa Essack from the South African Muslim Network, stressed that the SABC needed to relook at type of religious media coverage given to the South African audiences and to also look at other sources of media for the news coverage on religious issues besides the UK, Al-Jazeera and Sky news networks.

Kaizer added that the SABC representatives are keen to listen to the problems mentioned by the audience and for the audience to tell them how should the SABC improve their brand as well as how must the SABC go about choosing religious programmes? “The onus is on us (audience) to create programmes for the SABC-people need to create programmes in their language preference and approach us for feedback if it will be suitable or not, like how Muvhango, for example, has been done,” he said.

For more information on the editorial policy consultation process, the public can go to the SABC news website http://www.sabc.co.za/news for details of the public consultation meetings in all the provinces, to read about the policy review process, look at old policies and to give their input.

Written submissions can be emailed to editorial@sabc.co.za or posted to SABC Private Bag X1, Aucklandpark, Johannesburg, South Africa, 2006. Submissions can also be made at all the SABC’s provincial offices.

For general enquiries the public can contact the SABC’s call centre 011 714 9111 or 011 714 9797.
The public can also get a copy of the current SABC editorial policies in their preferred language at www.sabc.co.za/editorialpolicy.

Pictured: SABC representatives at the workshop.